Week Ahead: Flash PMIs and the RBNZ in focus

It is a shortened trading week for the US, but the focus will be on the November flash PMIs and a rates decision by the Reserve Bank of New Zealand.

With the Thanksgiving public holiday for the US on Thursday, it will be very much a front-loaded week for major markets. Furthermore, much of the action in the calendar comes on Wednesday with the flash PMIs for major economies. After months of economic deterioration, if consensus expectations are anything to go by, there are a few signs of stability forming. Traders will also be watching for the Reserve Bank of New Zealand (RBNZ). With another aggressive hike expected, will there be a dovish surprise in store? 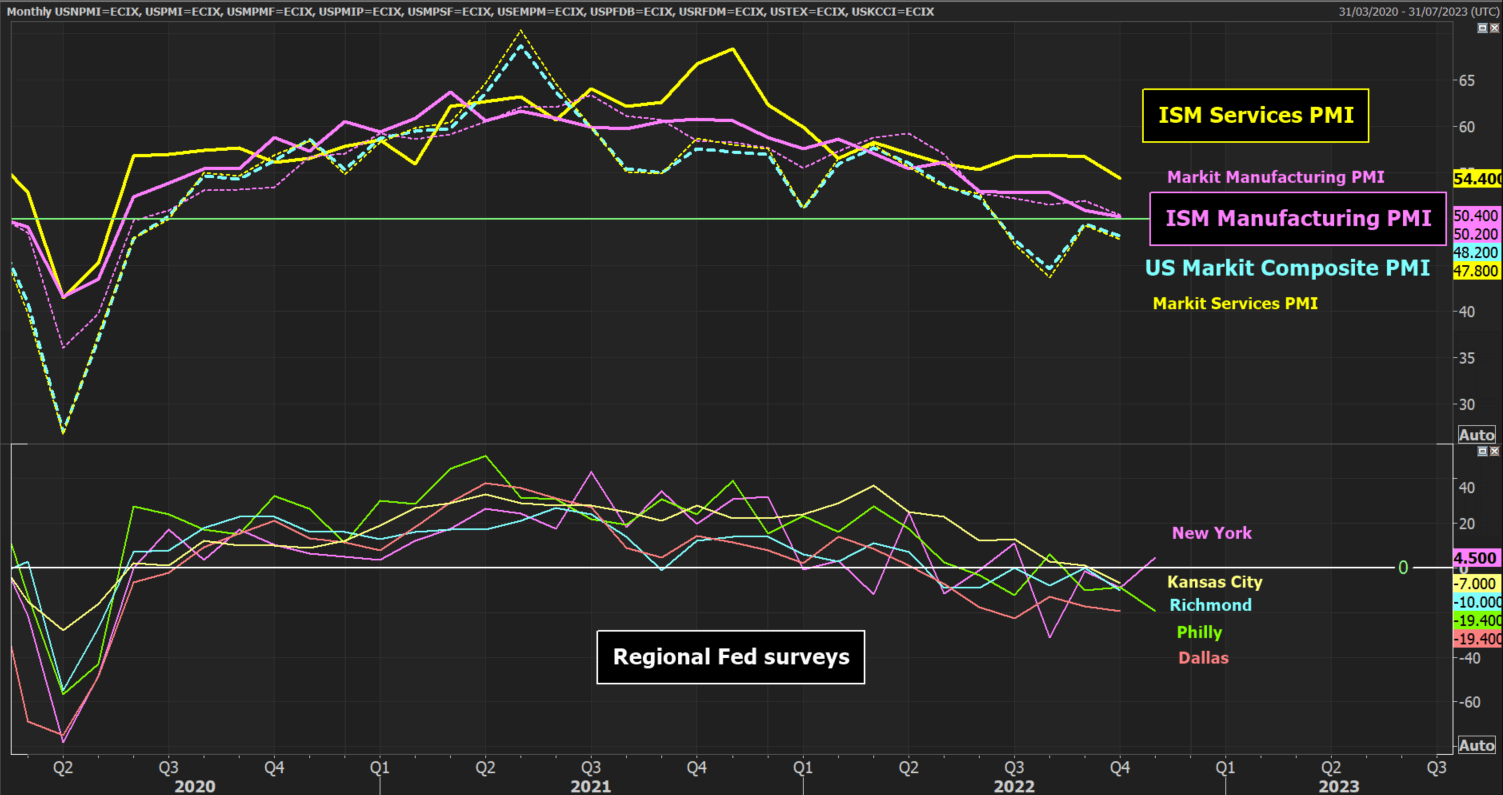 If the economic calendar is anything to go by, it is likely to be a relatively quiet week for the USD and this could translate across major forex pairs. The Thanksgiving public holiday means a lot of the data is being shunted forward. However, the lack of tier-one data may mean that many traders will be reluctant to take a view for positions over Thanksgiving.

From a market perspective, the direction of US Treasury yields remains a key driver for market sentiment and USD performance. As yields picked up towards the end of last week, the selling pressure abated on the USD. This may give rise to a near-term retracement and a chance for the USD to claw back some losses. However, with the Thanksgiving holiday looming, these moves may be short-lived.

The CAD continues to be the most subdued of the major currencies as the Bank of Canada has turned more cautious recently. The CAD underperforms during recovery phases but holds ground relatively well during the corrective moves. As such, with major currencies setting up for potential near-term corrective moves against the USD in the coming days, there could be a relatively stable outlook for the CAD. A solid set of retail sales would help too.

As the risk rally has just eased back over the past week, we have seen the rally in commodities start to unwind. A move higher in Treasury yields plays into this near-term pullback on precious metals such as gold and silver. The move is likely to run out of steam with US bond markets shut for Thanksgiving though.

The recovery on oil has turned into reverse as Iraqi officials have been arguing for higher output levels to drive increased revenues. Their preference for Brent Crude oil holding under $100 has also weighed. However, we see more of a ranging outlook developing as central banks look to ease back from aggressive monetary policy positions.

With earnings seasons all but done, Wall Street will increasingly be taking its cues from moves in US bond yields. However, with Thanksgiving at the end of the week, any potential near-term unwinding moves (on higher US yields) could begin to run out of steam. The focus will then begin to turn to the performance of the retail sector and Black Friday.

At the back end of last week, there were suggestions that the ECB may be more comfortable looking at a 50bps rate hike in December. This coincided with a corrective on EUR. However, the EUR has a lower beta than other major currencies (such as AUD, NZD, GBP) the relative performance has held up fairly favourably. If a corrective move continues for major currencies in the coming days, we expect EUR to continue to perform well and EURXXX crosses to move higher.

It is very difficult to build a bullish case for GBP right now. The economic outlook remains starkly weak, with the Bank of England hiking into a seemingly worsening recession. The short-covering rally of October into November is looking increasingly precarious and this may once more put pressure on renewed selling for GBP positions. Continued deterioration in the flash PMIs would play into this view.

With Wall Street still laden by the drag of the tech stocks, the performance of European indices remains positive. The DAX has ridden out the prospect of elevated geopolitical risk (from the missile falling in Poland) and is still looking to break higher. FTSE 100 remains more steady but is also holding up well.

The JPY has been performing well as major bond yields have been pulling lower in the past few weeks. Performance may begin to wane if US Treasury yields pull higher in the coming days. However, with US bond markets shut on Thursday the move may be limited.

With the risk rally across major markets threatening to reverse, this is leaving AUD at risk of corrective pressure near-term. An expected deterioration in Australian flash PMIs further into contraction (below 50) would add to this pressure.

With inflation of 7.2% (well above the 1%-3% target range) the consensus is looking for the RBNZ aggressively hike by 75 basis points this week. However, even if it does hike by this much, given the less aggressive rhetoric increasingly coming from other major central banks, a less hawkish bias to forward guidance may give rise to a “dovish hike”. This could leave NZD open to a near-term corrective move. 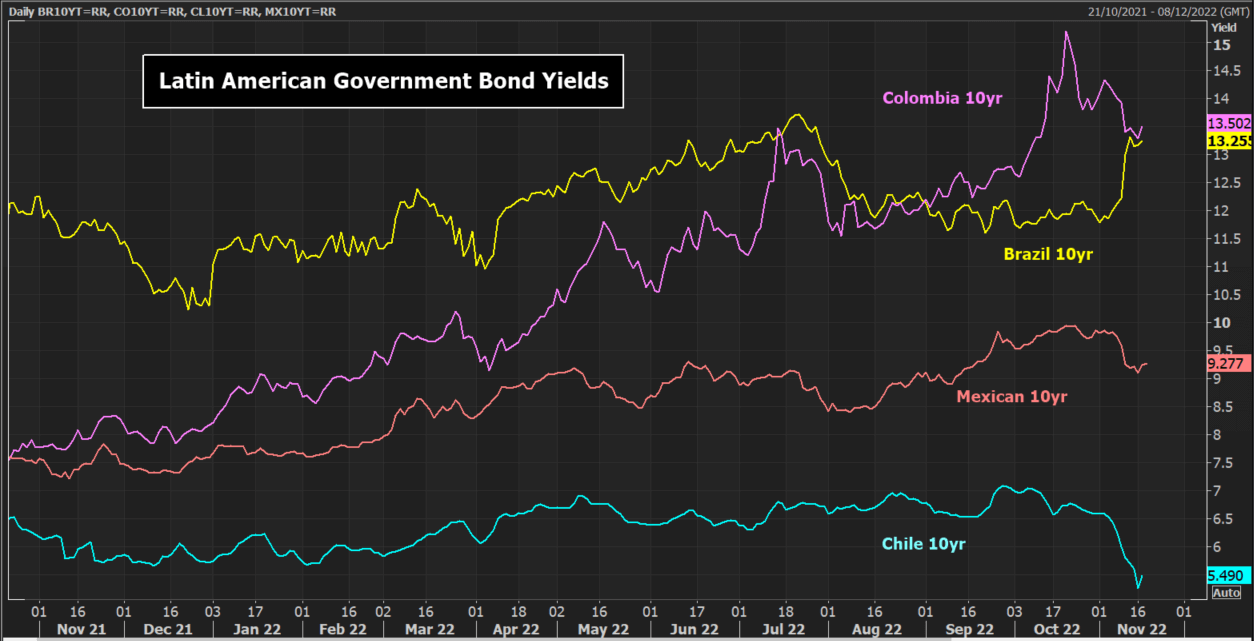 The BRL has fallen sharply in recent weeks. This is coming as Brazilian Government Bond yields have risen sharply. Markets initially greeted the Lula victory fairly positively, but the outlook seems to be deteriorating sharply now. The yield on the 10-year has increased from around 12% to around 13.5% in around two weeks. This comes as bond yields of LatAm peers have broadly fallen. If Brazilian yields continue to rise then the outlook for BRL will continue to deteriorate.