Week Ahead: PMIs, the Fed, the BoE and Nonfarm Payrolls

You can’t move for tier-one data for major economies this week. Manufacturing and services PMIs, Eurozone inflation, the Fed, BoE and RBA rates decisions all come before the week is rounded off by Nonfarm Payrolls. 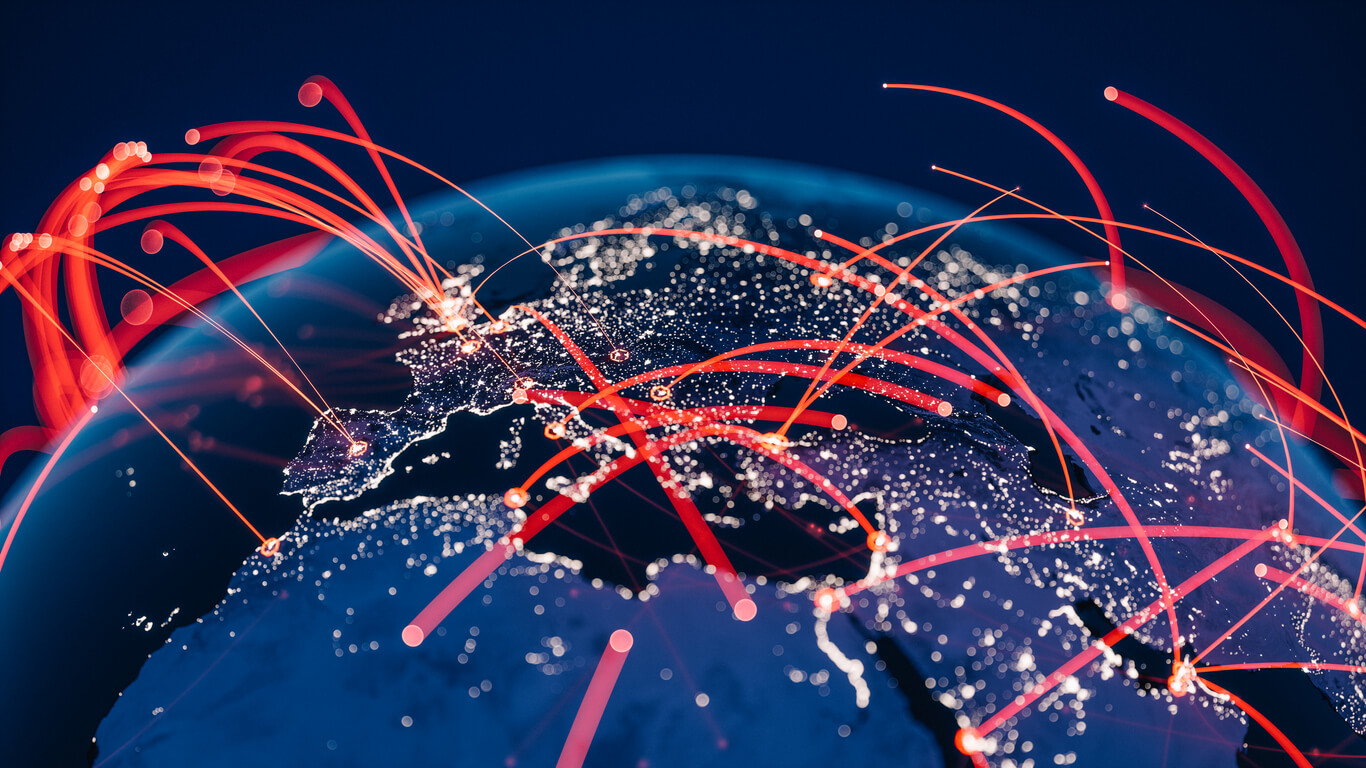 The first trading week of the month is always busy with tier-one data. However, with a flood of major central banks into the mix, we are left with a data trader’s dream week. It may be difficult to keep this succinct, but we will give it a go.

Both core and headline Eurozone inflation are expected to continue higher in October whilst flash GDP is expected to turn negative in Q3, making the ECB’s job even harder. There is a trio of major central bank rate hikes due. The RBA is expected to hike by 25 basis points, whilst 75bps are expected from both the Fed and the Bank of England. As ever the size of further hikes will be key for all meetings. Slight declines are expected in the ISM surveys. The week rounds off with the crucial US jobs report. Nonfarm Payrolls are forecast to drop to an all but neutral 200,000 as the labour market tightness continues.

There has been an enormous correction on the USD against major forex as traders have pondered the prospects of a “Fed pivot”. We will learn more from the Fed this week, but a 75bps hike is hotly expected. The question is whether the Fed starts to signal a less aggressive approach for the December meeting and beyond. If the Fed is “data dependent” and/or more mindful of the economic impact of aggressive tightening, it would begin to paint a less hawkish position. Friday’s Nonfarm Payrolls will then take on added importance.

A less hawkish Fed would give further fuel to the USD correction. We would be watching the 109.35 support on the Dollar Index as a gauge this week.

The Bank of Canada hiked by less than expected last week. The inference was not on the BoC but instead having ripples through the Dollar Index with the prospect of a “Fed pivot”. Despite this, Canadian data will be watched now for downside surprises which could weigh on CAD in its major crosses. Unemployment rising decisively should be watched.

With US “real” bond yields falling over in the past week, there has been a drag on the USD. If this continues, it should help to support commodities. There has not been a decisive recovery on gold yet, but despite choppy moves, silver is in recovery. We are also seeing oil rebounding for now. However, if there is a continued deterioration in the US economic outlook, this seriously questions the outlook for global oil demand and would likely restrict the rally.

A positive start to the earnings season has been weighed down by some disappointing earnings from tech giants such as Amazon, Facebook and Microsoft. This is weighing on the performance of the NASDAQ versus the Dow. It is also weighing on the recent recovery on Wall Street. It means that this week could be key for the medium-term outlook. Supports need to hold to prevent yet another rally from being used as a chance to sell.

Despite a 75bps rate hike, there was no hawkish surprise from the ECB last week. The legacy of this is a drag on EUR performance near-term. This week’s HICP inflation will be key, with Friday’s massive leap in Italian inflation raising the prospect of an upside surprise.

Concerns of the economic slowdown into recession for the euro area have played out mostly through EUR/USD. However, EUR has performed relatively well against GBP (political risk); AUD and NZD (underperforming commodity currencies) and JPY (massive yield differential). However, there are signs of reversals threatening in all of these EURXXX pairs.

The “Rishi rally” for GBP has played out just as the USD has turned recently corrective. This has fuelled a GBP surge. However, there will be questions about how long this move can last. The Bank of England is a significant risk event this week. A 75bps hike is hotly expected and may give GBP a bump higher near-term. However, we remain deeply sceptical of being long of GBP for any extended period. Negative economic fundamentals (rising inflation, negative growth, >5% on twin deficits) leave GBP vulnerable to renewed selling. For now, we play the recovery, but very cautiously.

With the tech stocks weighing down Wall Street, European indices are holding up relatively well. DAX is still way ahead of FTSE 100 in recovery, as it always is with a risk-positive rebound. If this moves into reverse, we expect DAX would underperform FTSE 100 on the way down.

With global yields beginning to track lower, we have seen a JPY recovery in the past week. With the BoJ doing little to change tack on its dovish path, this leaves JPY positively correlated to yield differentials. It means the FOMC meeting will be a key risk event for JPY (as will Nonfarm Payrolls). Falling US yields would help support a JPY recovery on its major crosses.

The Reserve Bank of Australia (RBA) is expected to be cautious again with another +25bps hike. However, last week's higher-than-expected Q3 inflation has helped to support AUD near-term and will make the meeting a little less certain.

Having been deeply unloved between August and September, the NZD is finding October is much kinder. The NZD is the best-performing major currency of the past two weeks and shows good signs of continuing the move. 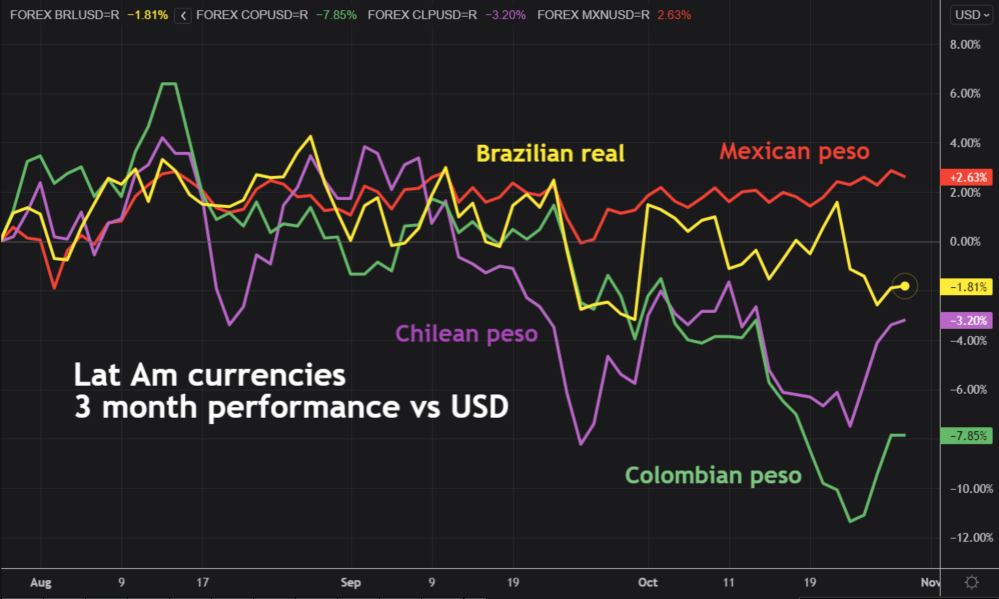 With a continued steady performance versus the USD, the BRL has missed out on a “Fed pivot” rally that other more volatile Lat Am currencies (such as CLP and COP) have experienced. However, we continue to favour the ranging stability of BRL with a Fed pivot and USD correction still to be determined.

With GDP expected to improve marginally to 1.1% QoQ in Q3, this should help to support the continued (albeit gradual) outperformance of the MXN. However, a move into contraction of the manufacturing PMI would be less encouraging.