With US Treasury yields moving higher once more the outlook for USD has improved. We look at what this means for major forex pairs. 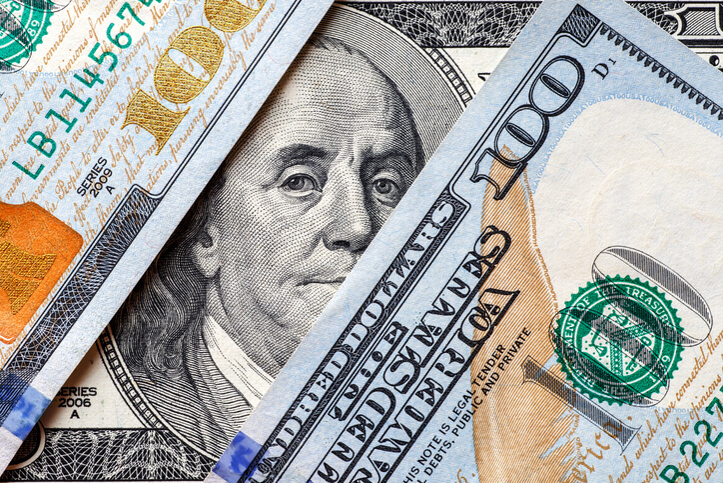 The US dollar (USD) has been on a corrective unwind over the past few weeks. However, in recent sessions, there has been a steady stream of FOMC members that have looked to shift the outlook on Fed rate decisions in a more hawkish direction. A strong Nonfarm Payrolls report has played into this narrative. Higher US Treasury yields are helping USD to turn a corner again and this could now have key implications for major USD forex pairs.

Fed hawks and US payrolls are moving markets

Throughout last week the members of the Federal Reserve came out to try and mould market views on further rate hikes. Several Fed speakers talked up the prospects of a 75 basis points rate hike in September. Furthermore, others were talking down the prospects of rate cuts in 2023.

“It is likely that we raise rates and sit there, as 2023 rate cuts are a very unlikely scenario.”

Keeping in mind that Kashkari is comfortably the most dovish member of the FOMC, this is a significant statement.

We can add in the impact of the much better than expected Nonfarm Payrolls report on Friday too. Jobs growth of 528000 (versus the forecast of 250000) was a significant beat. Furthermore, unemployment dropped to 3.5% and wage growth remained at 5.2%.

All of these factors play into a “data dependent” Federal Reserve remaining hawkish. Pricing for Fed hikes in the upcoming meetings has moved from c. 100 basis points of hikes to 125 basis points for the rest of 2022. There are no cuts priced for the first half of 2023. See the data from Vanda Research below. 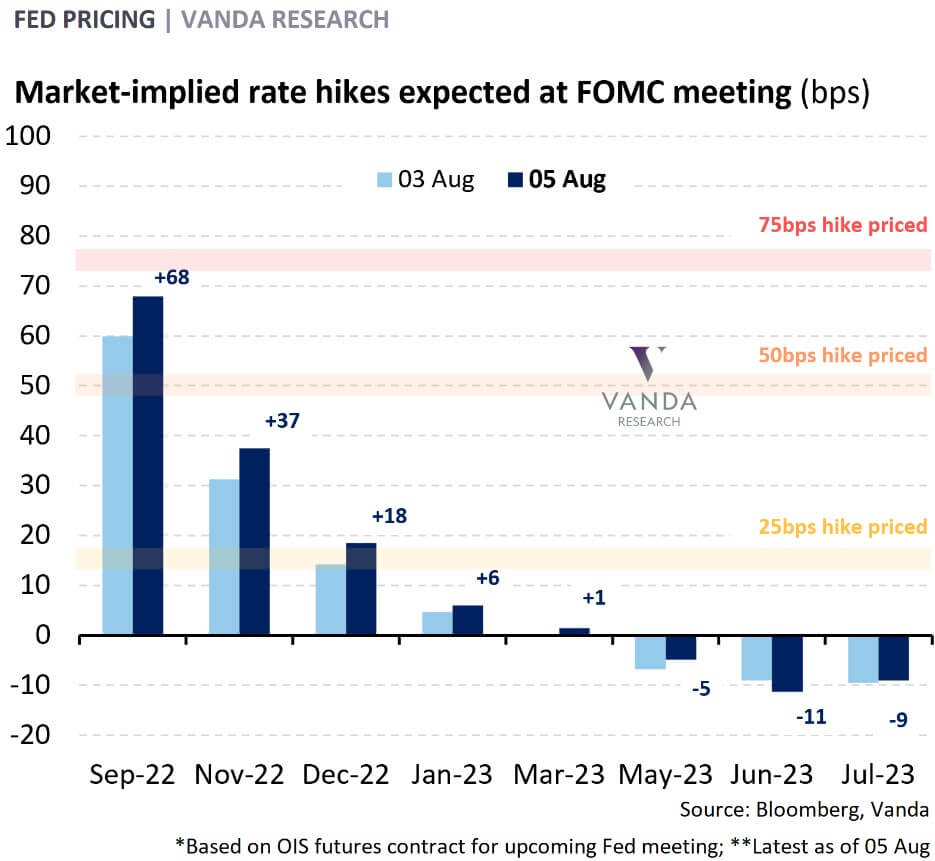 Yields picking up, USD is too

We have seen US bond yields picking up strongly in the past week. This has coincided with a stronger USD. The 10-year yield has rebounded from 2.51% to 2.8% (almost +30 basis points). 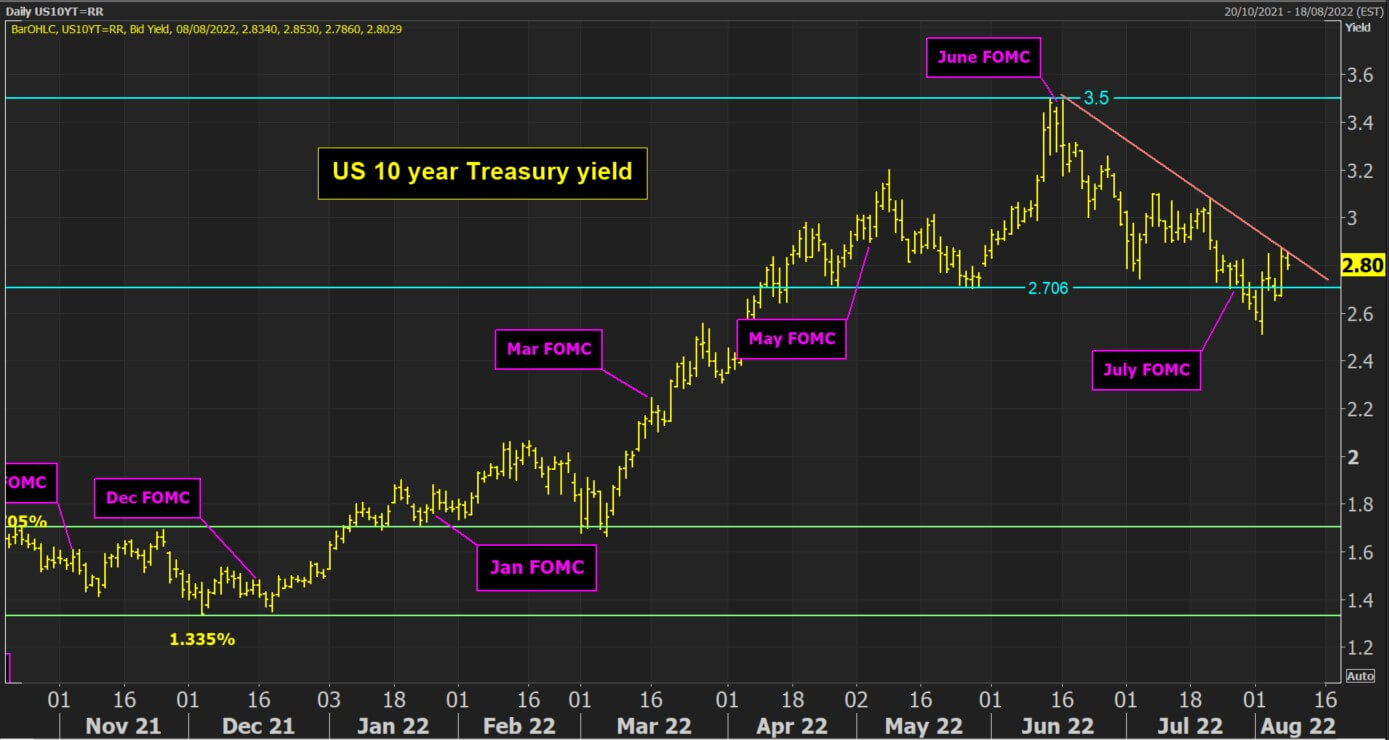 For now, a downtrend on the 10-year yield remains intact, however, this is something that we will be keeping an eye on now.

The USD has picked up too in the past week. Importantly, this rebound has come to maintain the six-month uptrend. The Dollar Index has rallied from 105.00 support to now break the corrective downtrend. There is a pause this morning, but we will be watching initial resistance at 106.93 and the lower high at 107.43.

For now, the outlook has stabilised and the move lower has been supported. A break above 107.43 on a closing basis would suggest turning USD positive once more. The reaction to US CPI inflation could be key this week. 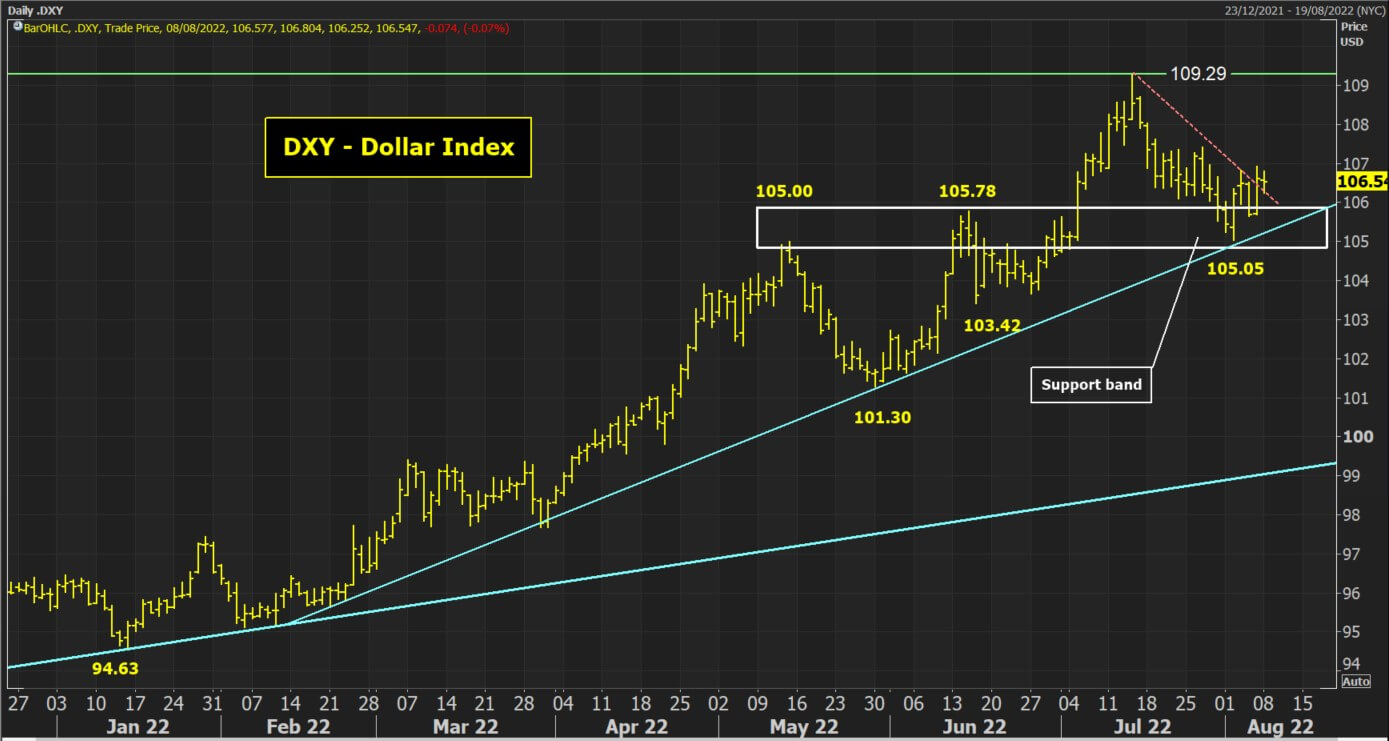 Looking at major pairs, at the least, the USD has stabilised the corrective momentum. EUR/USD has been ranging sideways for around three weeks now. A 200 pip range is in place, but this is holding under the multi-month downtrend. Support at 1.0095 and resistance at 1.0295 will be key now. 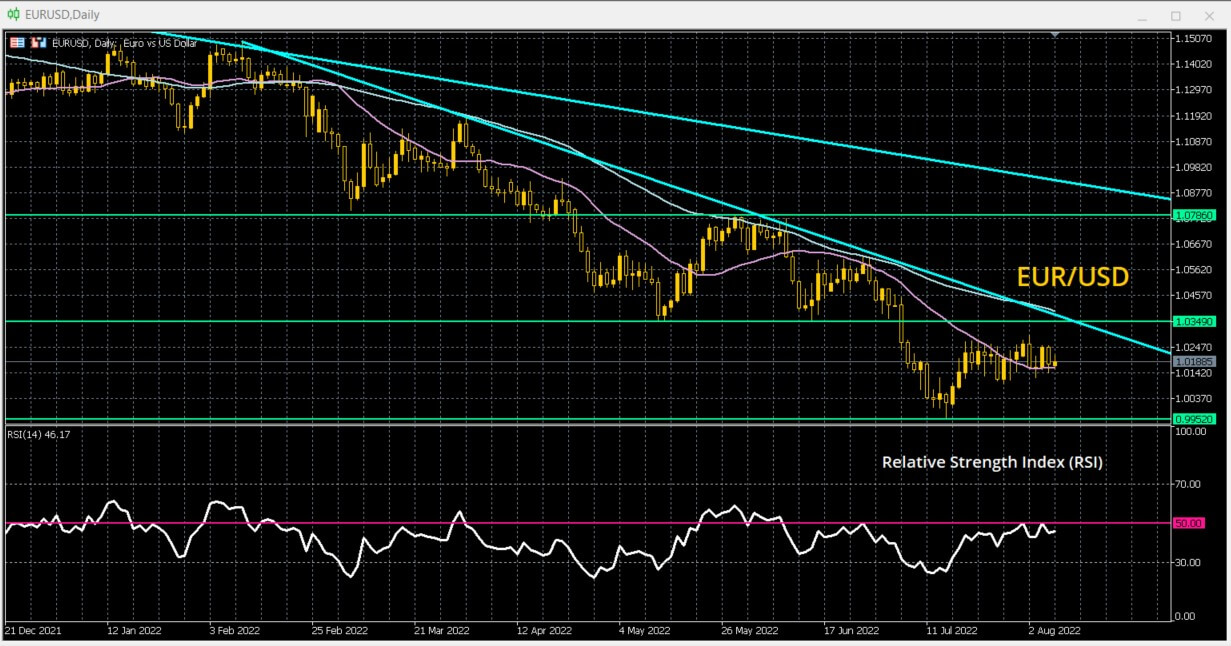 The AUD/USD is technically better, having broken the multi-month downtrend and a more positive momentum configuration (RSI holding above 50). However, it is also ranging now, between support at 0.6870 and resistance at 0.7045. 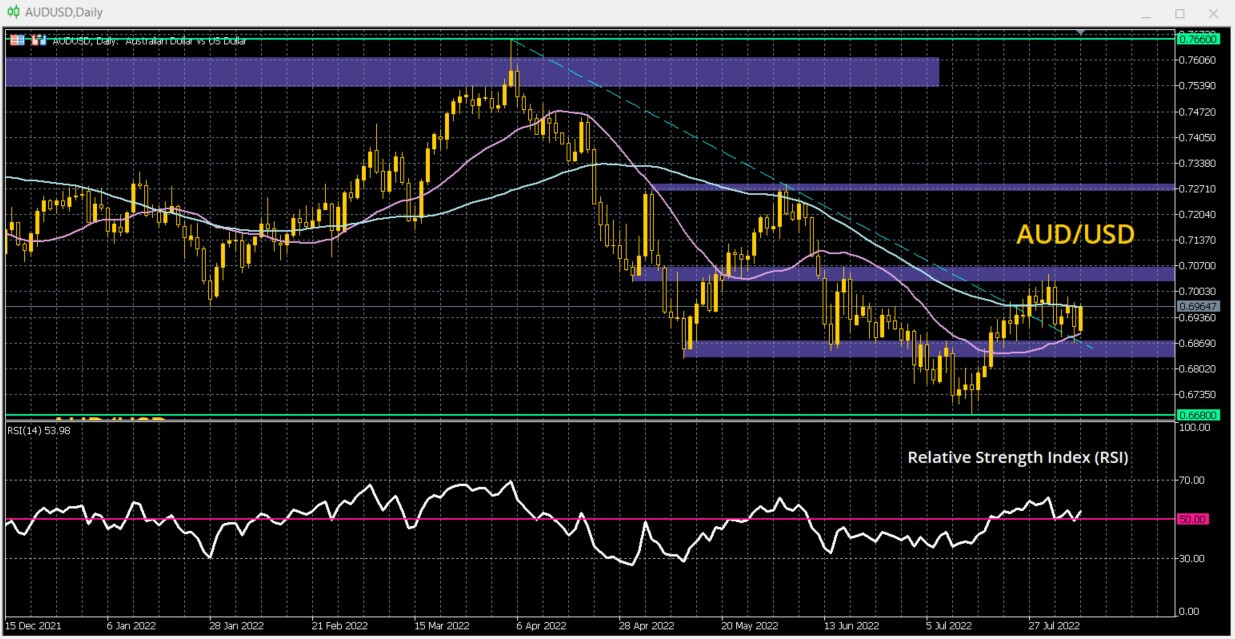 However, there are other major pairs that the USD is starting to look strong on too. The hawkish Fed speakers and a pessimistic Bank of England add up to mounting downside pressure on GBP/USD. The corrective downtrend was broken ahead of the Bank of England but now a recovery uptrend has also been broken, along with pivot support at 1.2060. If there is now a break below 1.2000 it would suggest that the negative pressure is resuming. 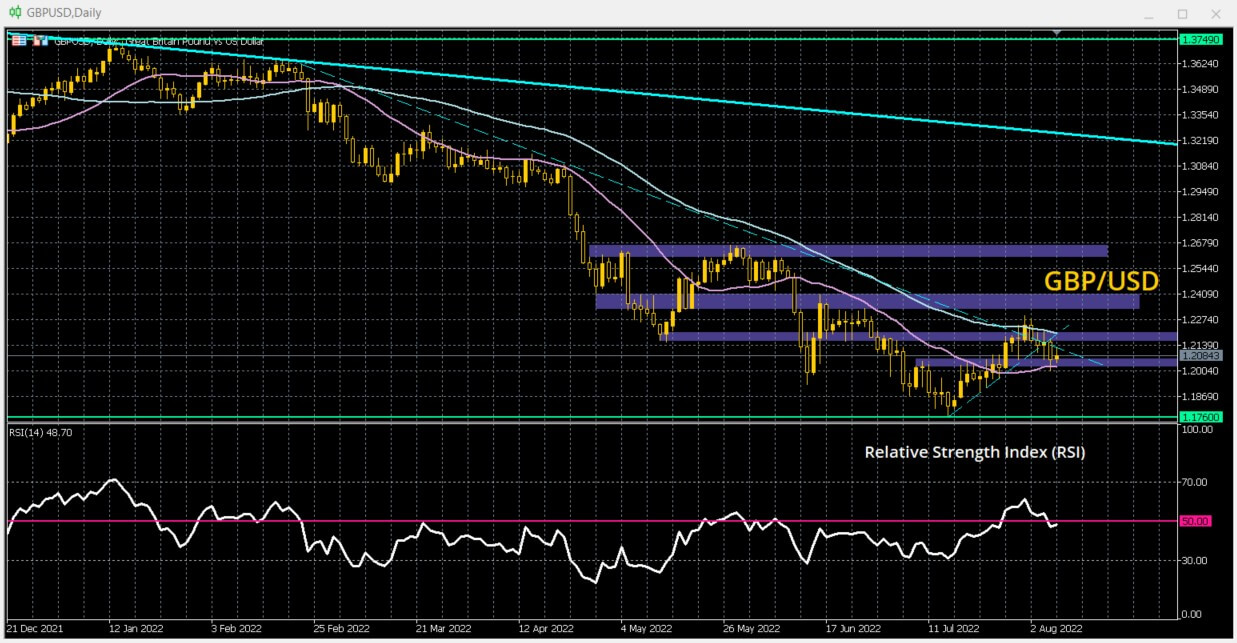 Finally, we have seen a strong rebound in USD/JPY. The positive correlation between the forex pair and moves on the US 10-year yield remains very strong. Higher yields have pulled USD/JPY higher. The move above a pivot at 134.25/134.50 has improved this outlook. If this support can hold then the prospects for sustainable moves higher will grow. 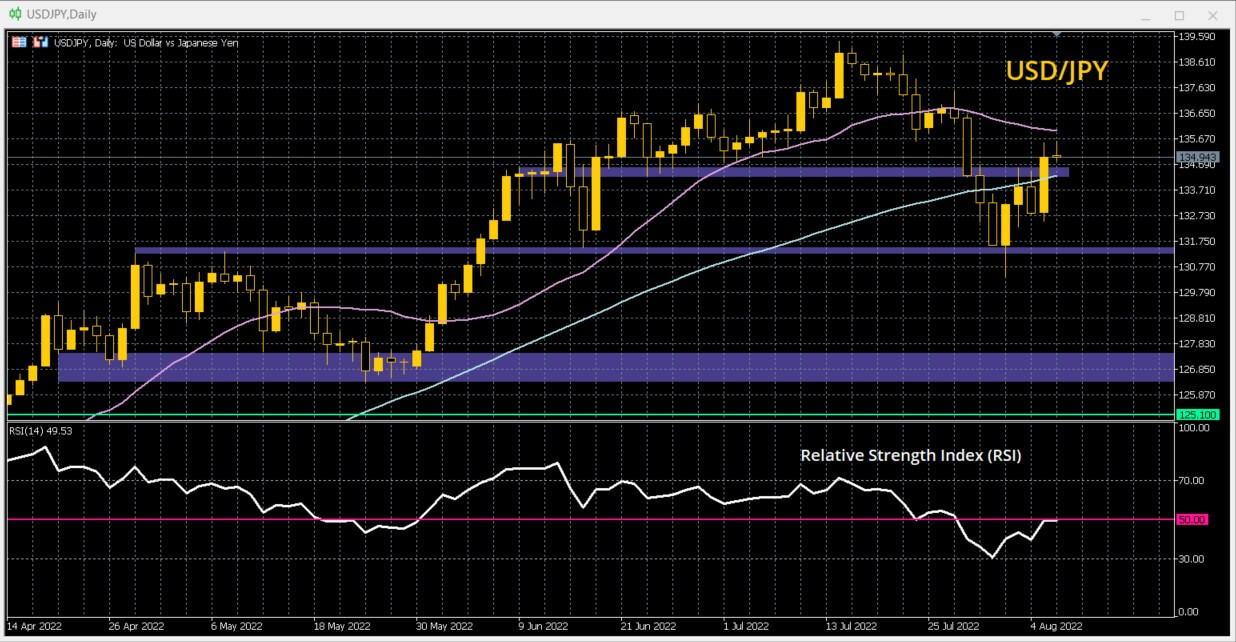