Traders now see the glass as half empty for indices

Equity markets are turning increasingly corrective, leading to us changing our trading outlook. Another bull failure would confirm that rallies are being seen as a chance to sell.&nbsp; 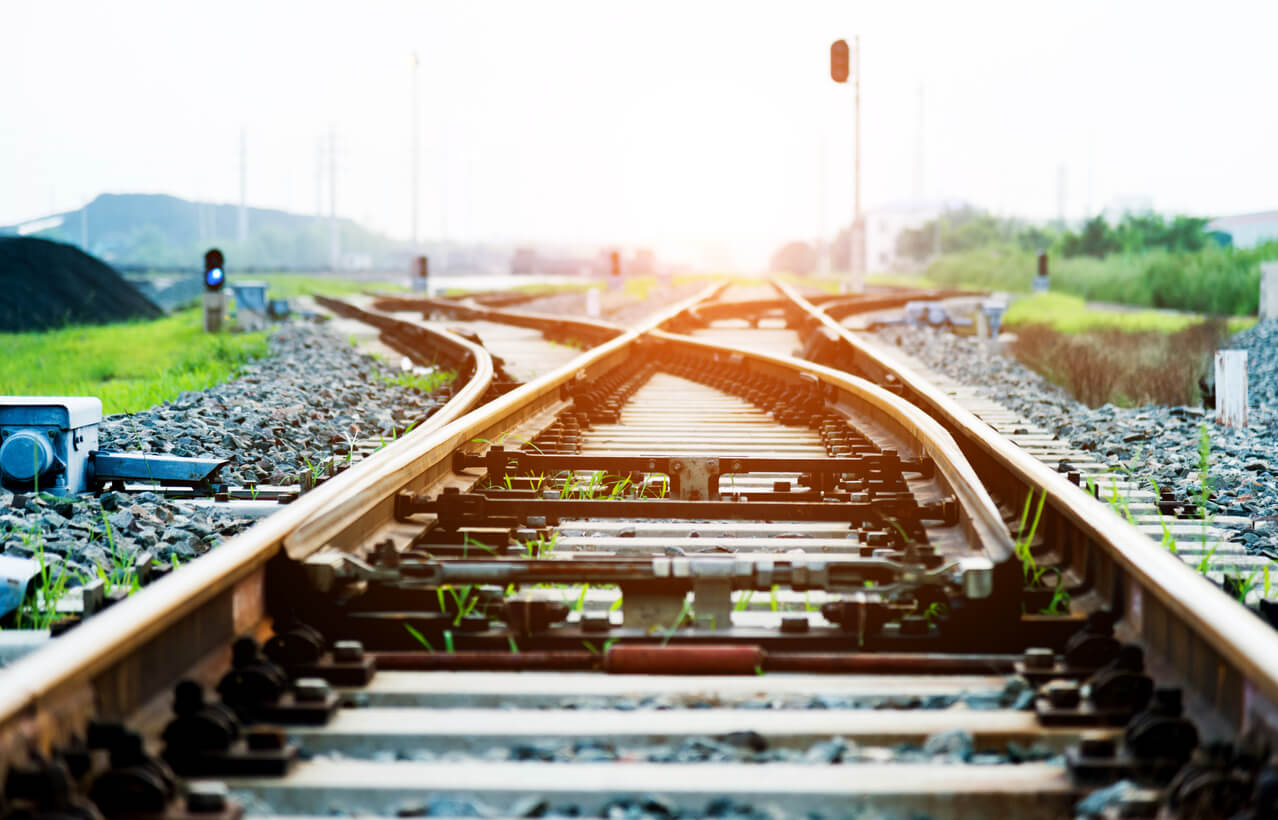 There has been a shift in the outlook for major indices. The trends of economic contraction are now weighing on sentiment and a negative risk appetite is developing. Equity markets have turned lower with traders of indices now seeing it as a glass half empty. Subsequently, rallies are increasingly being seen as an opportunity to sell.

A one-month recovery in equity markets had been progressing well. However, all seemed to take a turn last week after worrying news out of China. Expected improvements in retail sales, industrial production and fixed asset investment significantly disappointed in the actuals.

China is still seen as a significant driver of global growth and trade. Economic disappointment for the world’s second-largest economy matters. The reaction on equity markets was not instant, but this soured broad market risk appetite.

Having led the recovery for indices, the NASDAQ (a key growth market for the US) turned lower. This was then followed by other major global markets topping out a day later. 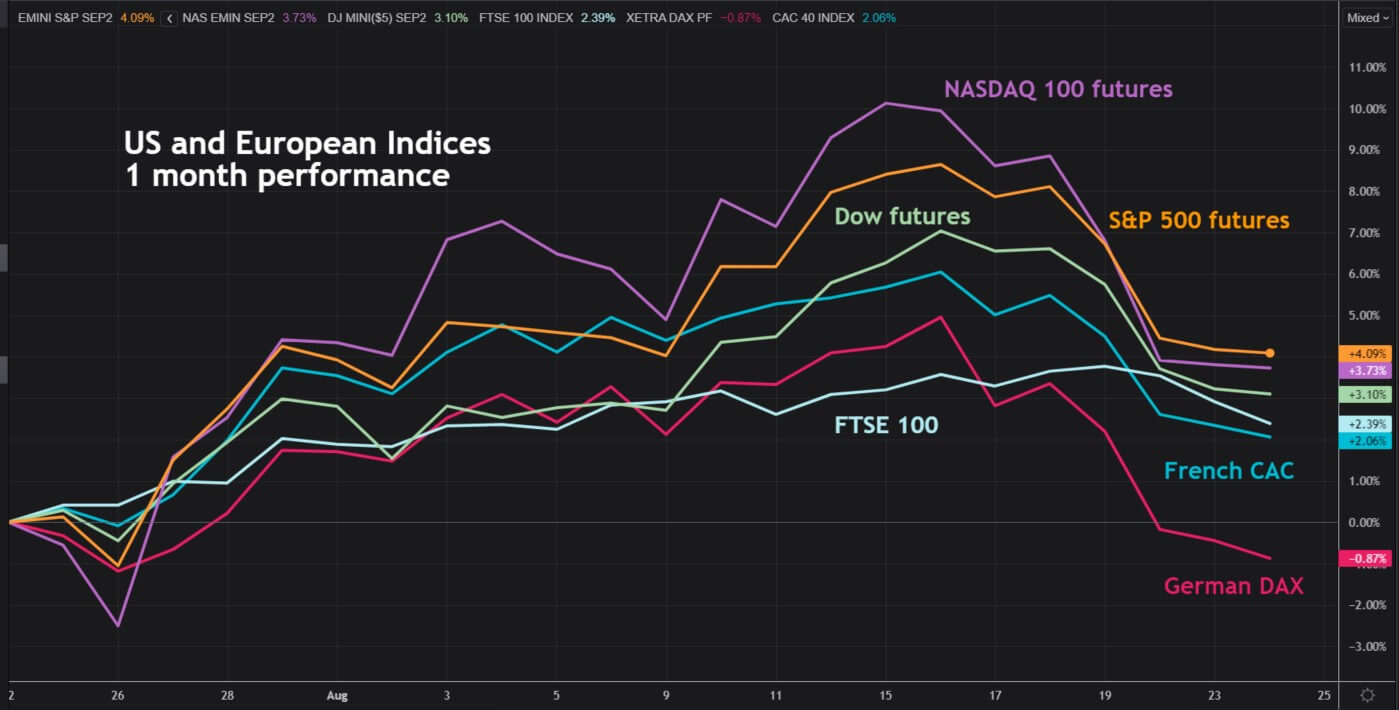 Earnings season is over, focus is on the deteriorating macro outlook

Earnings season was not great for the US, but markets still took the positives out of it, to drive Wall Street higher. This was helped as the perception was that the Federal Reserve taking a slightly less hawkish stance in the July FOMC meeting. With inflation beginning to peak, the potential for a less hawkish Fed could help to fuel a Wall Street rally.

However, the FOMC members have been lining up behind one another to argue for the hawkish stance from the Fed to be sustained. Coming with deteriorating economic prospects of China, the Eurozone (and latterly the US) and no corporate news to cling to, investors are seeing the glass as half empty once more.

The key development for equity markets is that support is being consistently broken now (especially in European indices). We have been previously positive on US futures, but we now favour a change of outlook to a more negative bias.

The corrective move has been quick (indices will often take the stairs up and the elevator back down). This leaves room for near-term technical rallies. However, we believe that with the outlook having turned negative, rallies will be seen as a chance to sell now.

Wall Street markets have fallen. The S&P 500 futures (SP500ft) have broken the 4145/4200 support. This now becomes a basis of resistance and a bull failure on a near-term rebound could result in mounting pressure on the key support at 4080/4110.

The daily RSI is on the brink of turning corrective (a move below 50) but there are growing corrective signals on other momentum indicators such as the MACD lines and Stochastics. A close below 4080 would open a much deeper correction towards 3950/4000. 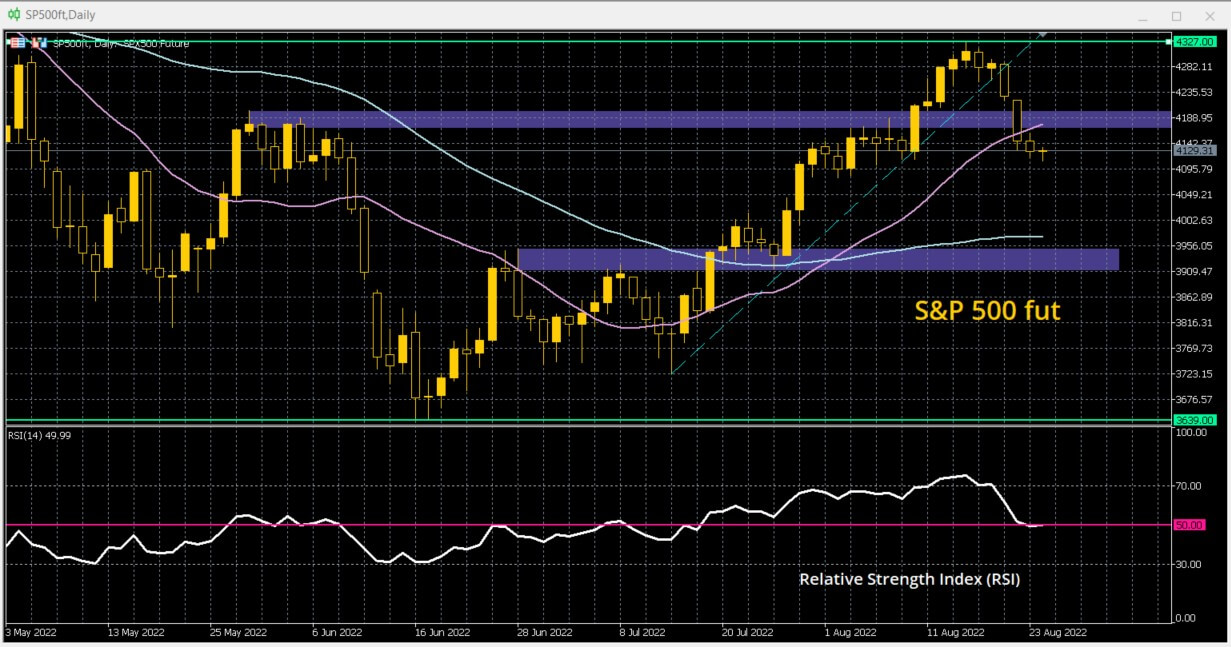 The NASDAQ 100 futures (NAS100ft) have closed below support at 12945, with the RSI below 50. This is another market with sell signals on Stochastics and MACD lines. There are the early stages of a new downtrend too. There is now a band of old support which is new resistance between 12945/13105 to look for bull failures and the next sell signal. 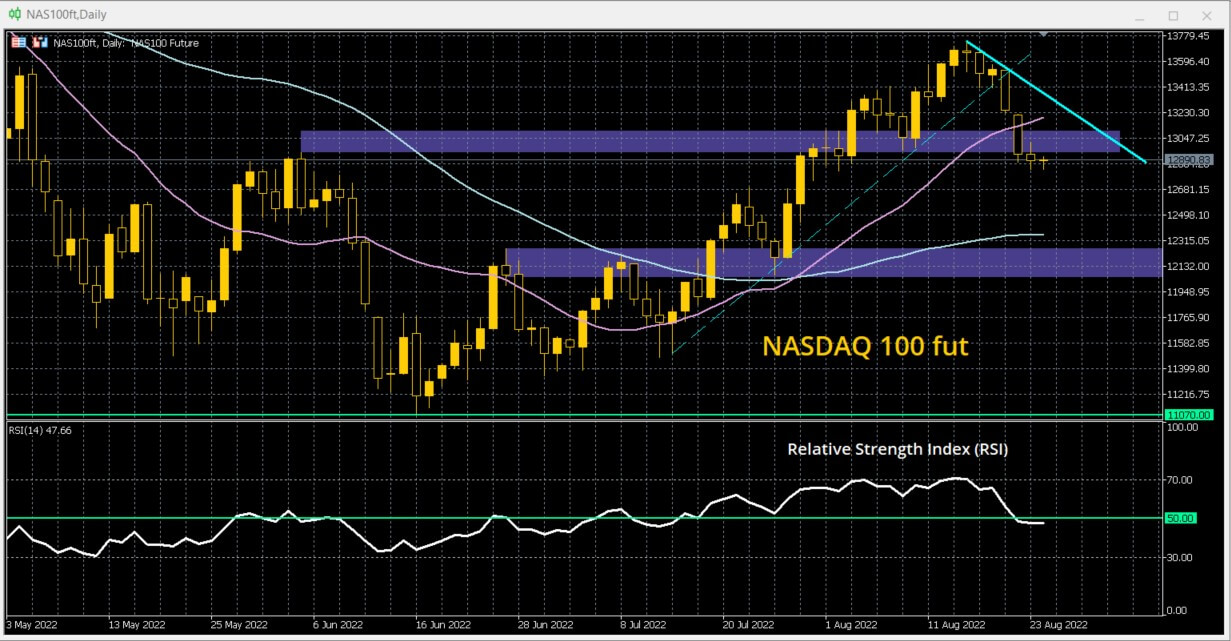 There is one caveat with the deterioration in the outlook on Wall Street. The Dow futures (DJ30ft) have fallen hard, but have not yet broken below key support. The RSI has unwound to 50, however, there are sell signals on the Stochastics and MACD indicators. Below 32660 would add to corrective momentum, with a close below 32340 being a key breakdown. 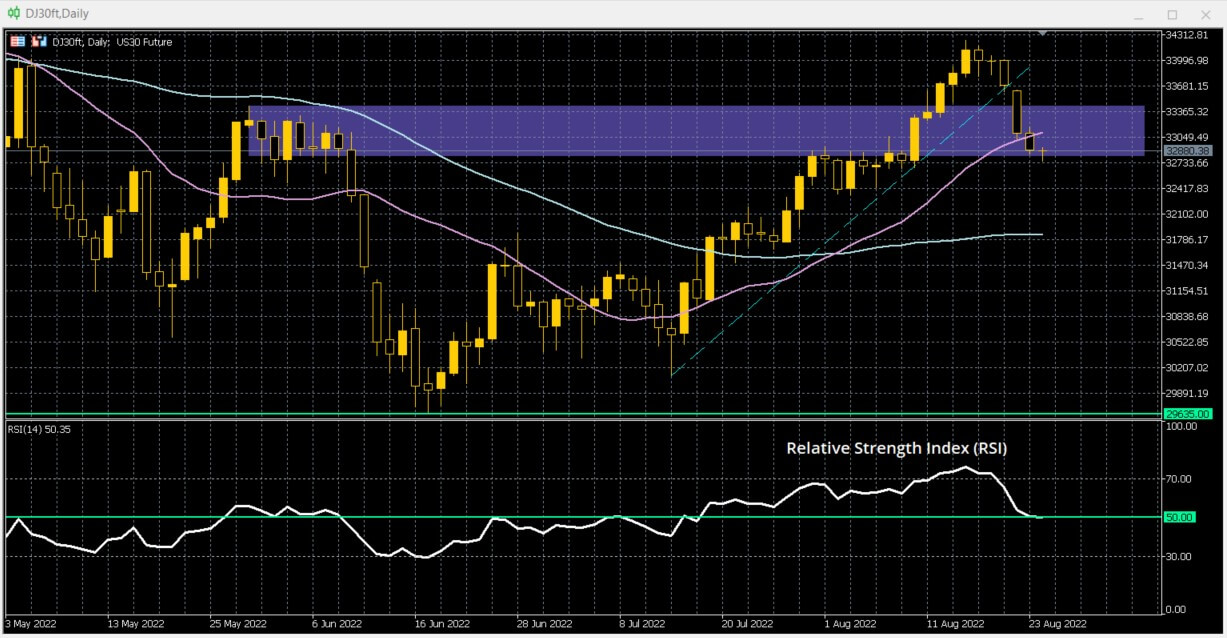 The German DAX (GER40) has fallen hard and is back below a key band of support between 13330/13450. With corrective (RSI) and sell signals (Stochastics and MACD lines) the outlook is deteriorating. The market is slightly higher today but we would look for any bull failure at or around the 13330/13450 resistance as a chance to sell now. A move below 13000 would be a significant breakdown. 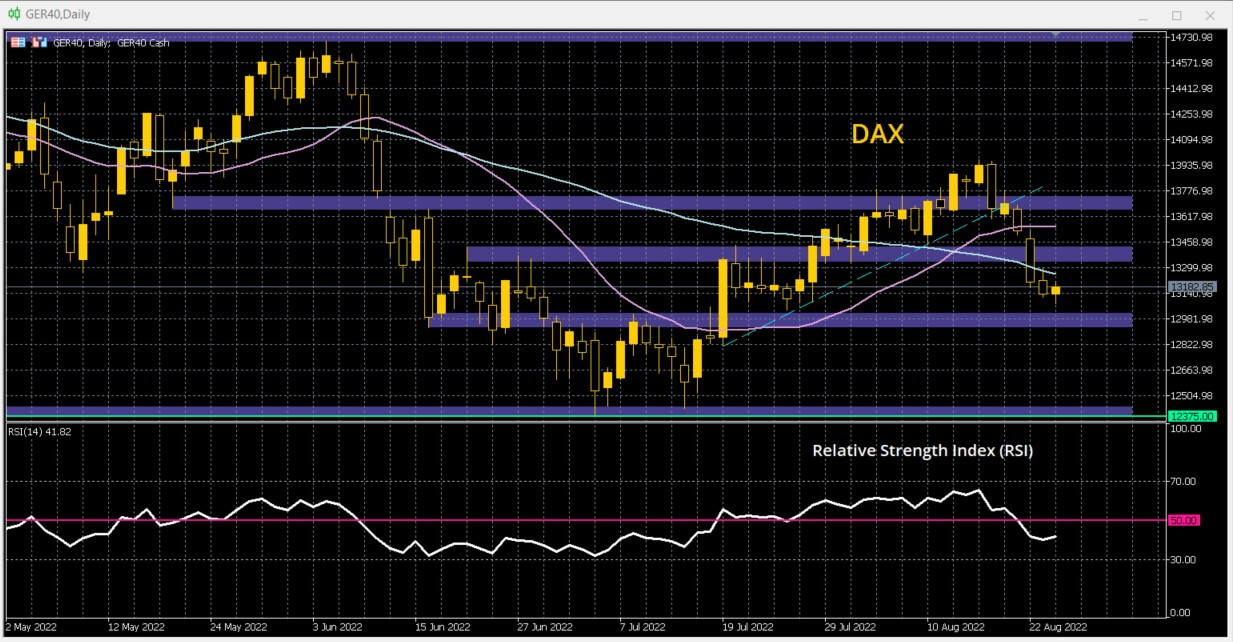 The FTSE 100 (UK100) has been holding up relatively well, however, in the last couple of sessions has begun to be weighed down by the negative sentiment. A close below 7457 would confirm the breaking of the old recovery and a new more corrective outlook forming. This would bring 7335/7370 back into play for a near-term pullback. 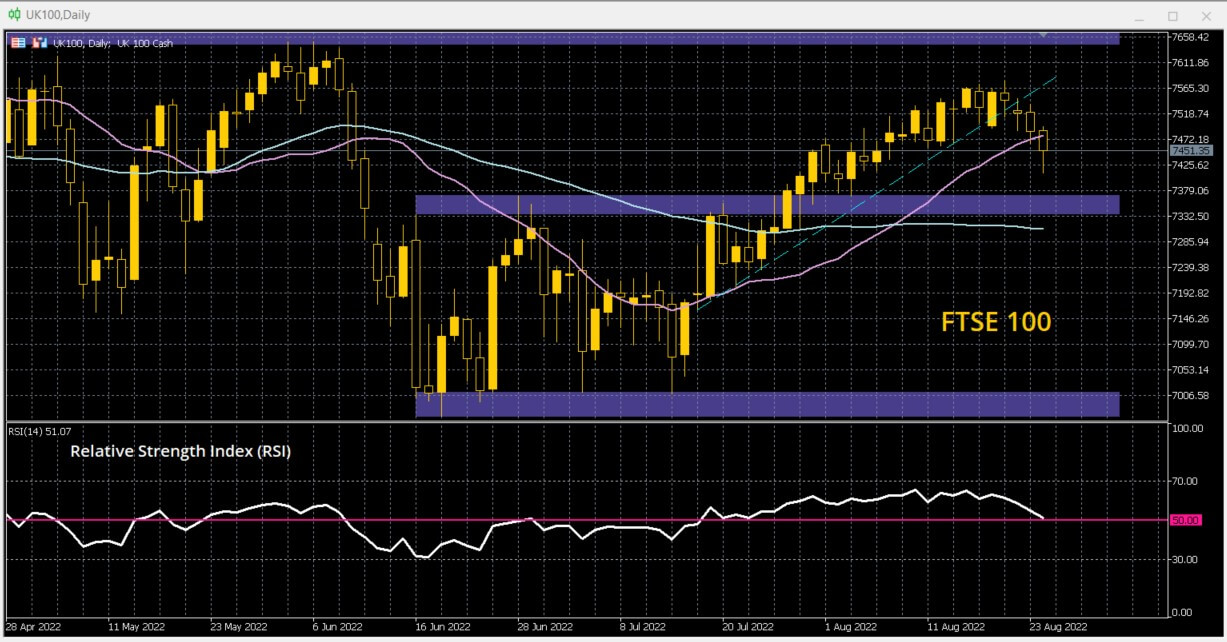