Wall Street bulls return with an intent to shift the outlook

After a terrible performance in September, indices have been recovering well in recent weeks. Wall Street seems to be at the front of this move, with markets eyeing key resistance levels once more. 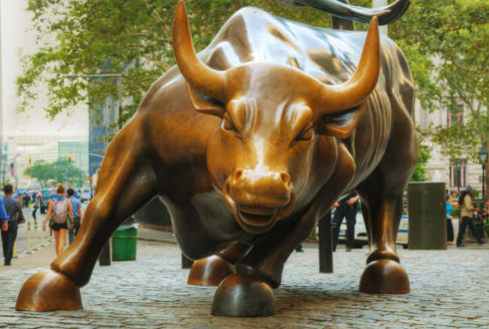 Equity markets have spent recent weeks trying to recover from a fairly bruising September. However, in the past week, there has been a decisive acceleration in markets moving higher, with Wall Street leading the bounce back. There has been a key reason for this. Real bond yields have fallen. This is allowing the US Big Tech sector to recover again.

After a torrid September, the big bounce back is progressing nicely

Equity markets suffered a significant wobble in September. Suddenly markets woke up to the dawning realisation that the Federal Reserve was ready to start reducing its asset purchases and the prospect of higher interest rates was looming.

Global markets fell, with Wall Street suffering more than most. Sharply higher bond yields helping a stronger dollar drove investors out of growth stocks for something a little more defensive (higher-yielding value stocks). The growth heavy NASDAQ suffered the most, but other markets were also dragged lower.

However, just as September turned to October, a shift in sentiment has taken hold. “Real” bond yields have fallen (much because Treasury yields have been steady whilst inflation indicators have risen).

In turn, the US dollar has also moved into reverse too. Falling real yields and a falling US dollar helps to support sentiment. As a result, indices such as the NASDAQ are recovering.

The longer that real yields slide back (and the US dollar also corrects) the better the conditions are for a continued recovery in indices.

Now let’s look at the performance of indices since the big change in sentiment that took hold on 4th October. Suddenly we find NASDAQ flying back higher, far outperforming the other indices that are also weighed down by value stocks.

The FTSE 100 which outperformed in September due to its heavy weighting of value stocks, now finds itself once more languishing as the weakest performing of the US and European major indices.

The performance of this chart is entirely in line with a risk recovery with falling real yields. It shows a switch, back from value stocks into growth again. NASDAQ is the top performer, followed by the S&P 500 (which is swayed by the tech giants amongst its 500 constituents). The Dow is less dominated by growth stocks, so lags the NASDAQ and S&P 500. Then on to Europe, the DAX is export-heavy and is more geared to positive risk appetite than the FTSE 100 which is dominated by value stocks.

There was a key positive reaction yesterday which shows that the Wall Street recovery is in full swing now. An initial early fall over (amid a small USD bounce) was used as a chance to buy. This was a reflection of the shift in sentiment from what had been seen previously in September.

Looking at the technicals, the S&P 500 futures (MT5 code: SP500ft) has moved the first key lower high at 4472. Having already formed a higher low at 4317 this was the next step in the new positive trend. It has also re-opened the all-time high of 4548. Momentum confirms the improvement, with the RSI into the 60s and weakness is now a chance to buy. We cannot rule out a near-term slip back, but the bulls will be looking to form a second higher low between 4388/4420 but more bullish traders will be looking for 4420/4470 now as a higher low.

For the NASDAQ 100 futures (MT5 code: NAS100ft) we see the recovery just marginally less developed than compared to the S&P futures. However, holding on to the long term uptrend channel support was very important. A new higher low is in place at 14,585 and the bulls are now eyeing a break above the first old key lower high around 15,400. This would then open 15,530 as the next resistance.