UK inflation has spiked higher and with more to come, the pressure is mounting on the Bank of England to hike rates again in February. This could continue to drive GBP trades in the coming sessions. 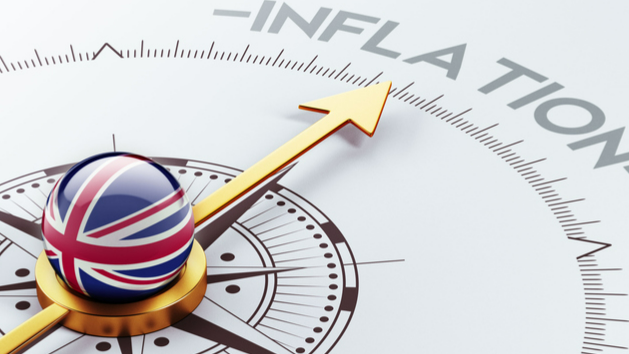 UK inflation has jumped again in December. The headline CPI came in ahead of expectations. This comes despite the surprise rate hike by the Bank of England in its latest monetary policy meeting in mid-December. Inflation is rapidly rising towards the level of an expected peak. However, the Bank of England is increasingly likely to hike again at its February meeting. This should continue to underpin the rise in Gilt yields and GBP.

UK inflation jumps higher than forecast, and more to come

UK inflation jumped to +5.4% in December, from +5.1% in November. This was higher than the consensus of market forecasts which was looking for an increase to +5.2%.

The big contributors to inflation in the UK are driven by pricing pressures from energy, most of which is internationally driven and beyond the control of the Bank of England rate policy:

The issue with energy prices impacting inflation is not going away either. It is set to continue throughout the coming months. According to the Bank of England, CPI is likely to continue higher until peaking around 6% in April.

The Governor has to write to the UK Government explaining why inflation is above 3% (a 1% margin for error above the 2% target). The December letter showed the BoE already having increased its inflation projection from 5% in the November monetary policy decision to 6%, mostly driven by the increasing pricing pressures of energy prices. Here is an extract from the letter:

However, many analysts believe it could be even higher than 6%. Capital Economics thinks that the peak could be as high as 6.9% on headline CPI and 5.0% on core CPI, as UK energy prices rise by 50% in April.

All this inflationary pressure puts added pressure on the Bank of England to increase interest rates again in February. A +15 basis points hike to +0.25% surprised markets in December. However, another +25 basis points in February is increasingly priced in now.

In early January, it was around a 50:50 call, but unemployment continues to fall with a positive reaction on the labour market to the end of the government’s furlough scheme. The Bank of England will be minded to act in the wake of this inflation data surprise that brings the headline CPI to a level where the bank’s 6% projection again looks a little low.

February is certainly possible now for a hike to 0.50%, and if not then May would be a given.

Sharp rising bond yields of major markets have been a key feature of markets through the past few weeks. UK Gilt yields are no exception.

This has been a key driver of GBP outperformance during recent weeks too.

It is noticeable that GBP has jumped higher again in the wake of the UK inflation data this morning. The continued rise in UK bond yields will drive the outperformance of GBP which could continue now into the Bank of England decision on 3rd February.