Equity indices are under selling pressure as bond yields pick up again. With a switch out of growth stocks, we are seeing NASDAQ falling sharply, but across major markets, crucial support areas are under threat. 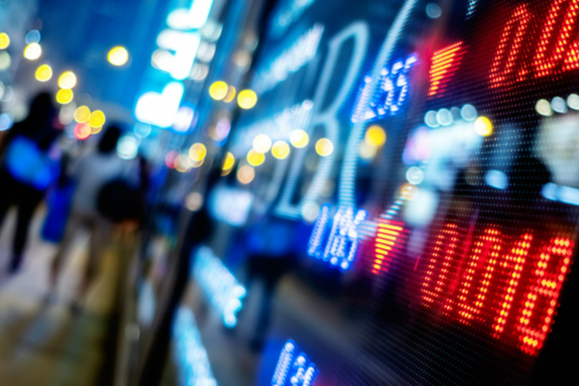 Equity markets continue to trade with a negative bias. This is weighing markets lower as intraday rallies seem to be increasingly taken as a chance to sell rather than building for recovery. This is resulting in mounting pressure on key medium-term supports. The medium-term ranging outlooks on major indices are hanging by a thread.

Since the FOMC meeting in September, global markets have been pricing in higher Treasury bond yields. When this comes with higher inflation fears, this is a negative for market sentiment in indices. Higher interest rates and dealing with higher inflation risk is a double whammy hit to equity markets.

NASDAQ has swung to become the underperformer

The key feature of moves in equity markets since September is that NASDAQ has turned from being by far the best performer of the US and European markets, to one of the worst. The key factor has been rising bond yields which have been accentuated by the Fed meeting.

This is because the NASDAQ is stacked with growth stocks. The mega-cap tech stocks are expensive valuation and low yielding. This is a bad combination for an environment of rising bond yields (i.e. rising interest rates). Growth stocks are underperforming value stocks (which are seen as cheaper valuations with the bonus of a dividend yield).

This is why NASDAQ is falling so sharply whilst the Dow especially (more filled with value stocks) has held up relatively well in recent weeks. It is also worth noting the FTSE 100 is holding up well (full of financials and oil sector value stocks and very few growth stocks).

This corrective move on equity indices has broken multi-month uptrends and unwound several markets towards the bottom of medium-term trading range support areas. However, the risk is that if these supports are broken, then some big top patterns could result. It would be very difficult to make a bullish case for equities if this happened.

The S&P 500 futures (MT5 code: SP500ft) continues to dip into the support band 4223/4295 in recent sessions. A key reaction low at 4347 (the August low) has already been breached, but if a second key low at 4223 was broken then there would be a significant deterioration in the outlook. Momentum is already corrective and the concern is that old support levels are increasingly becoming the basis of resistance on technical rallies. A close below 4233 opens 4126 and 4029 as the next potential tests of support.

The Dow futures (MT5 code: DJ30ft) are in a more stable position right now. However, there is still a negative bias within the trading range. The support band 32,900/33,500 has only briefly been tested. The configuration of momentum suggests that the selling pressure lacks conviction for now. However, if the S&P breaks down, this position could change for the Dow.

NASDAQ 100 futures (MT5 code: NAS100ft) remain in an uptrend channel, for now, however, there is a continued breaching of support. Furthermore, the market has also arguably completed a “head & shoulders” top pattern. This is a reversal signal which is leaving key resistance between 14,700/14,800. If initial support at 14,365 were to be broken then it would confirm the channel breach and open downside towards 13,800/14,000.

FTSE 100 (MT5 code: UK100) has fallen sharply today (as all major markets are), but it will be interesting to see if this continues, as up until today, the index has been holding up relatively very well. Despite, this though, there is still some way to go until the key band of support 6794/6840 of the medium-term range lows come into view. If bond yields continue to rise, we would still see FTSE 100 as being well-positioned for relative outperformance compared to other major indices.

That includes the German DAX (MT5 code: GER30) which is technically the most worrying outlook of all the major US/European indices. It has tested the crucial support of the medium-term range low at 14,810 already this morning. However, a close under 14,800 would confirm a breakdown. The nest supports come in at 14,400 and then 14,150.