The market impact of a steadying UK Prime Minister Sunak

A quick agreement among Conservative MPs has allowed Rishi Sunak to become the latest UK Prime Minister. He comes with a fiscally prudent reputation which financial markets have welcomed. However, can it last? 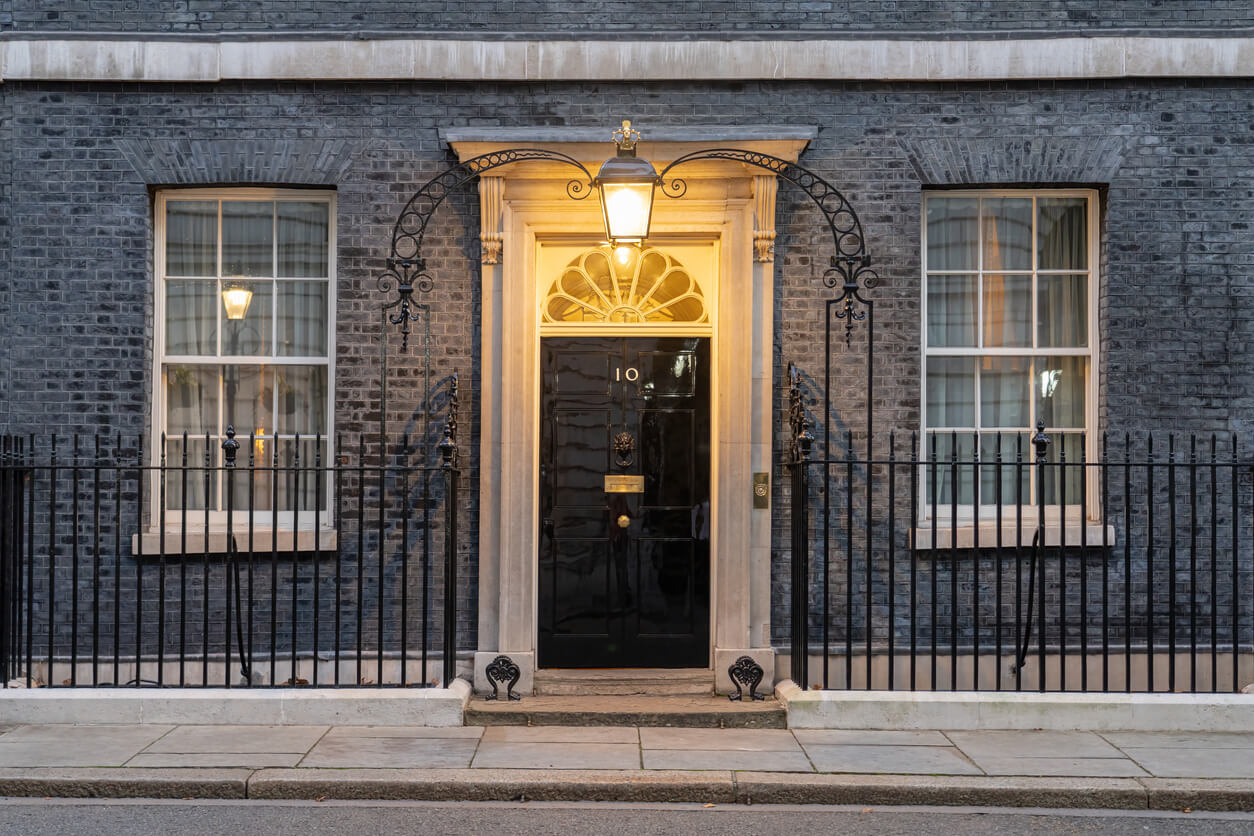 Rishi Sunak has been appointed to be the latest UK Prime Minister. He is the third person to hold the post in the past four months. After a period of elevated political risk, there is an opportunity for calm. However, it may be short-lived with plenty of risks on the horizon.

Sunak is a safe pair of hands

During the previous leadership election between Liz Truss and Rishi Sunak, it was the fiscal prudence of Sunak which cost him victory (although Conservative Party members were also struggling to forgive him for apparently stabbing Boris Johnson in the back).

Sunak now comes into the role of Prime Minister with a reputation as being a safe pair of hands. He guided the UK through COVID with the furlough scheme that helped steady the economy through an extremely difficult patch. Through the leadership election, his forensic analysis of the impact of “Trussenomics” turned out to be entirely true.

So as he becomes Prime Minister, he comes in with a strong reputation in the eyes of financial markets. The reaction on UK assets to him quickly replacing the chaotic Liz Truss has been subsequently positive.

31st October will be key

However, there are key tests that lie ahead. One of the most sensible things that Truss did in her 45 days as Prime Minister was to appoint Jeremy Hunt as she tried to fight the fires of Kwasi Kwarteng’s mini-budget. Hunt immediately put a more sensible fiscal plan together.

Although it appears that Hunt will remain as Chancellor (at least for now), there is a big test approaching next week. On 31st October there will be an Office of Budget Responsibility reaction to the Government’s fiscal plans. Do the sums add up and what will the plans do for the outlook for economic growth, the budget deficit and the inflation outlook?

This will be a big test for Sunak’s new Government. It will therefore be a big event for UK Gilts and sterling (GBP).

Bond markets giving the thumbs up

For now, though, there has been a very positive response to the appointment of Sunak. The UK 30-year Gilt yield has been a key indicator of the UK in recent weeks. This is where the strain of the liquidation of UK pension funds was being felt the most. This was where the risk of contagion was being acutely felt.

The 30-year Gilt yield fell on Monday morning as a deeply divisive Boris Johnson confirmed that he would not be in the running for Conservative leader. The yield fell further through the day as Sunak was confirmed as the winner.

We can see also in the move of UK Gilt yields versus other major economy yields, that markets have certainly been responding. The actions of the Bank of England to step in to stabilise bond markets have helped, as has the appointment of Hunt as Chancellor. However, even from yesterday, the 10year yield fell from 4.05% on Friday, to now below 3.70% (-35 basis points). This is a big decline that has been more significant than falls in Italian BTPs (-29bps) and German Bunds (-18bps).

Volatility on sterling is reducing every day now. GBP/USD options volatility spiked to levels not seen since Brexit during the chaos of Liz Truss. It is now reducing quickly. For now, volatility is still elevated and this will still likely play out through some significant sensitivity on GBP positions. However, markets are far calmer than where they were just a couple of weeks ago.

This volatility is also shown in the trading volatility. The Average True Range is declining, which means the size of the daily range seen on GBP/USD is reducing. The ATR hit a peak of 270 pips on Cable and is now back under 200 pips. It must be said that 200 pips are still very volatile for Cable, which historically tends to be between 120 and 160 pips per day. However, volatility is certainly reducing. It will be interesting to see if the daily volume levels also begin to reduce too.

It is also notable that major equity markets have been showing a better performance in the last two weeks. A chart of the performance in the past month, which includes reaction since the mini-budget, has UK markets firmly underperforming. We also include the FTSE 250 Index which is the UK mid-cap market and is a strong reflection of UK domestic equities,. UK equities are considerably lagging the recovery of European peers during recent weeks. 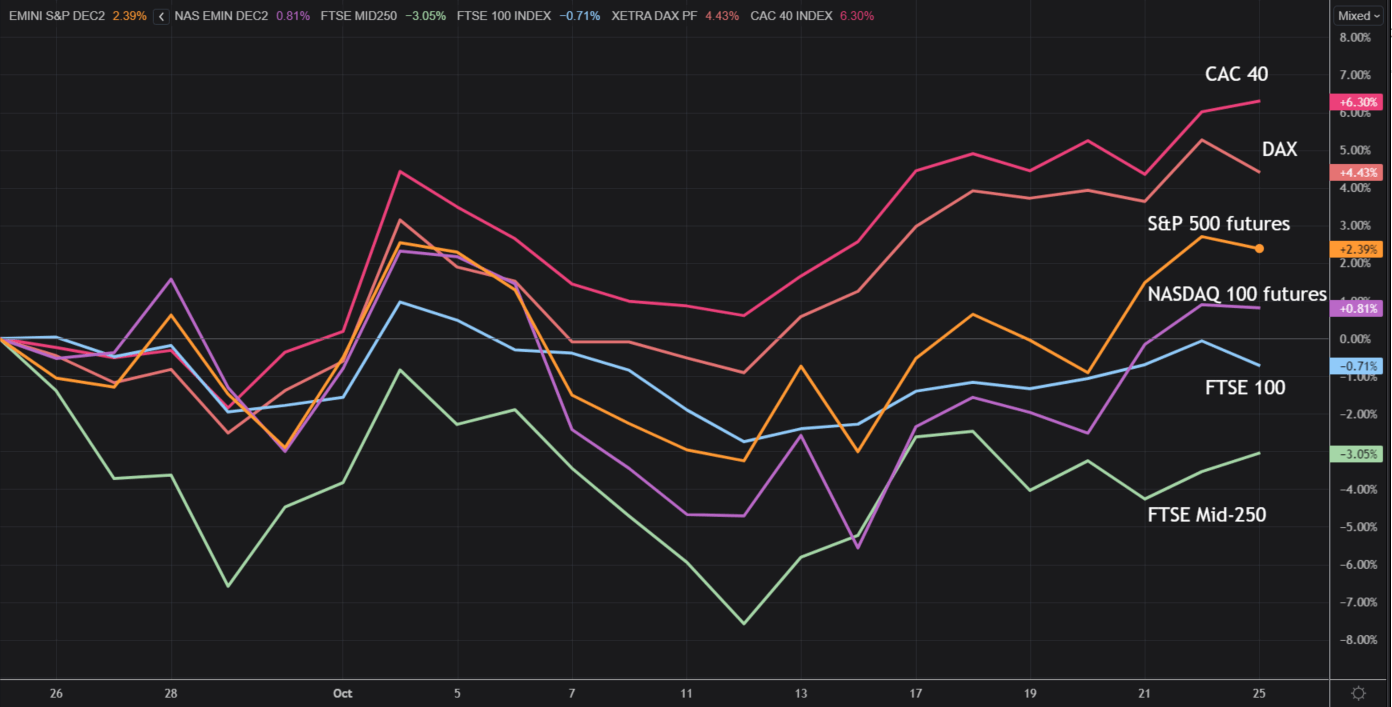 This shows that UK equities need stability in government. If this is what the new Prime Minister Sunak brings, then the UK equities may begin to play catch-up on a relative performance basis.