Week Ahead: US CPI will be the standout risk event

On a holiday-shortened week for the US, the CPI inflation will be the key market driver. The US consumer will also be in focus with retail sales and Michigan Sentiment. 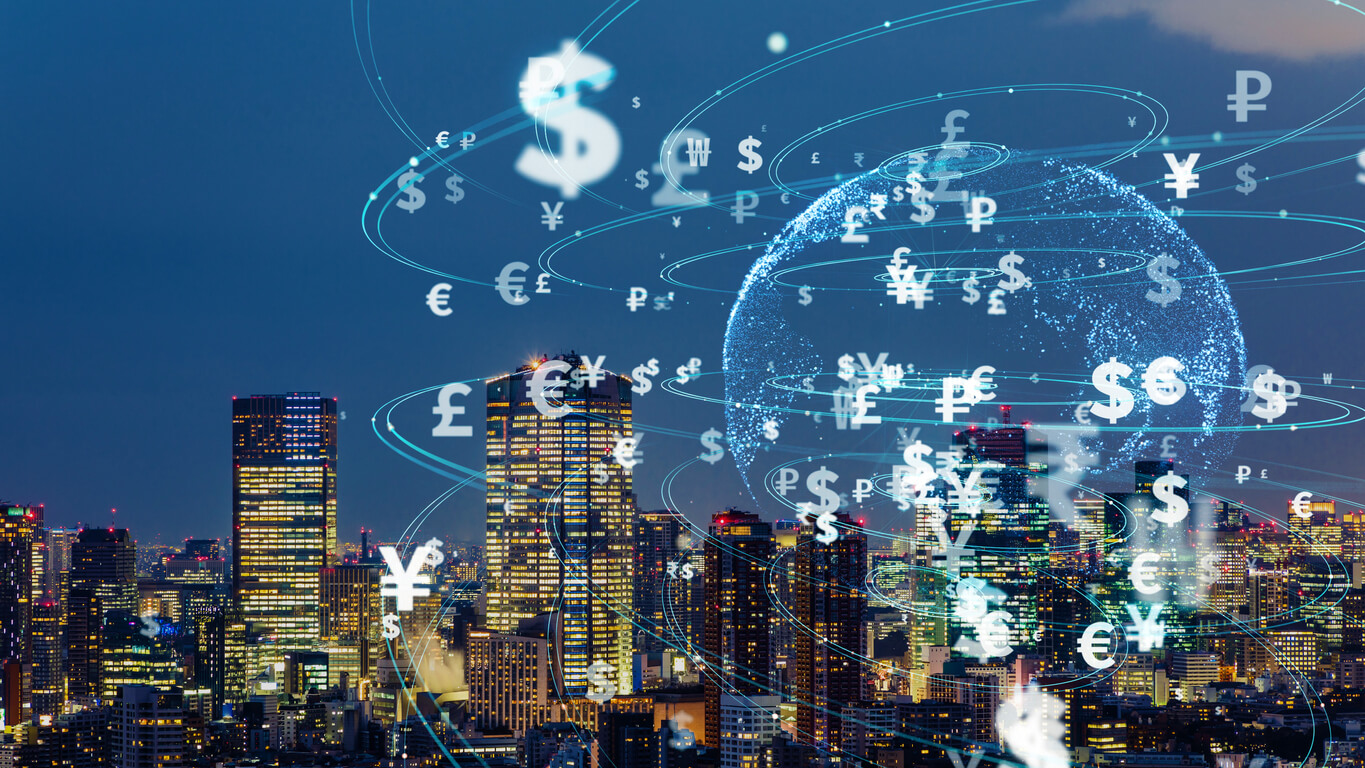 With even the dovish FOMC speakers (such as Mary Daly) still intent on reducing inflation, US CPI will be the primary focus for traders this week. Beyond that, the outlook for the US consumer will also be a theme, with retail sales and the Michigan Sentiment survey.

We continue to see significantly elevated volatility in bond and major forex markets. High volatility in both tends to mean that risk appetite is the main driver of forex, rather than interest rate differentials. Subsequently, we find deteriorations in broad sentiment being supportive for USD. We expect this to continue this week.

All eyes will be on US CPI inflation. The upside surprise to the CPI last month, drive a massive USD bull run. With the recent risk rally unwinding an overbought USD position, any upside surprises in the CPI this week will likely drive a similar reaction.

There is little Canadian data to drive CAD this week, but it might be worth keeping an eye on the path of the oil price. Being a net energy exporter, CAD tends to be supported by higher oil prices. Fluctuations in risk appetite also tend to mean that positive sentiment supports the CAD too. Subsequently, if the USD moves into the ascendancy once more, CAD may suffer.

Precious metals recovered sharply as the mini-USD correction played out last week. However, there are already signs that the USD is ready to trend higher once more. With US “real” yields picking up again this will likely weigh on precious metals, especially gold. We continue to note the elevated volatility of silver.

There had been suggestions in recent weeks that OPEC+ would make a sizeable cut to its output limit. It has decided to cut output by 2 million barrels per day. The move is to balance the declining demand expectations (slowdown in China and Europe especially). Although in reality, the cut is probably closer to 1 million (OPEC+ has not been hitting its targets), this is a significant cut that is at the top end of expectations and has helped to generate near-term positive momentum in the oil price. However, going forward, if OPEC+ is worried about deteriorating demand, this upside move in oil may prove to be short-lived.

Analysts are getting ready for a tough set of results in the Q3 earnings season. According to FactSet, S&P 500 company earnings growth is expected to be +2.9%, which is the lowest since Q3 2020. However, with continued negative trends for economic growth over recent weeks, analysts have been busy cutting their earnings estimates. From 30th June to 29th September estimates were cut by -6.6%, the largest since Q2 2020 (when the COVID impact was at its peak).

The EUR rebounded with GBP last week on the improvement in risk appetite. However, we believe this will be a near-term move before attention once more re-focuses on the negative outlook for the Eurozone economy. As such we still favour selling into strength, especially versus the continued trend of USD strength.

UK Government bond markets (Gilts) have settled down in the wake of the Bank of England stepping in, allowing the GBP to recover. However, as the dust settles, the UK economy remains worrying. Growth data for August is forecast to be tepid but any negative surprise could restrict how much the Bank of England can hike in November. Ultimately, we see GBP continuing to struggle under not only economic but also political risk. The trend lower could take hold once more this week.

With major bond yields rising again, European indices will struggle to continue the near-term recovery. We continue to see near-term rallies as a chance to sell.

The outlook for broad risk appetite remains a key driver of JPY performance. With forex volatility elevated, the Japanese yen continues to trade as a haven play. Since the currency intervention in Japan, the outlook for USD/JPY has significantly calmed, leaving JPY tied closely to USD moves. Positive risk appetite is JPY negative.

There is not much on the economic calendar to change the narrative this week. However, traders will keep an eye on the housing data which was cited as a reason for a more cautious RBA last week. Coupled with any USD strengthening, this could leave the AUD under selling pressure once more.

The Kiwi took some positive momentum from the RBNZ decision last week. The discussion on raising rates by 75bps leaned towards the hawkish side. However, the NZD remains at the mercy of fluctuations in risk appetite that are driving higher beta currencies right now. A strengthening USD leaves the NZD vulnerable again. 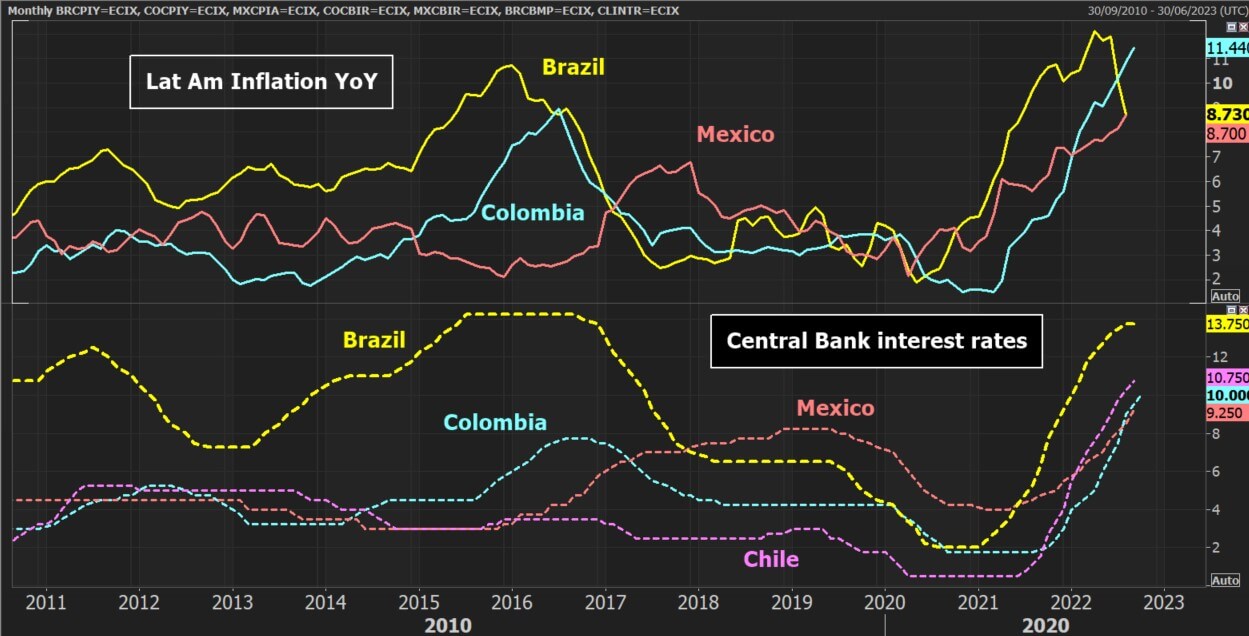 Inflation is falling in Brazil. This has relieved some of the pressure on the central bank with a subsequent pause in the rate hikes. A forecast for further inflation reduction strengthens the expectation that this pause will continue. The outlook for the BRL has fluctuated in recent weeks, improving again as risk appetite improves. The medium-term performance has held up well amidst the trend of USD strength.

The peso continues to be a currency of stability in the LatAm basket. Although fluctuations have been seen, the relative stability is generating outperformance versus other Lat Am currencies that are more vulnerable to USD strengthening (and higher USD rates). A slight decline in year-on-year industrial production should not impact the MXN too greatly.