Week Ahead: The Fed leads a stream of major central banks

It is another crucial FOMC meeting this week, but the Fed is not the only central bank in town. Interest rate decisions for the PBoC, SNB, BoJ and the delayed BoE meeting will also be important for major markets. We consider the potential market impact. 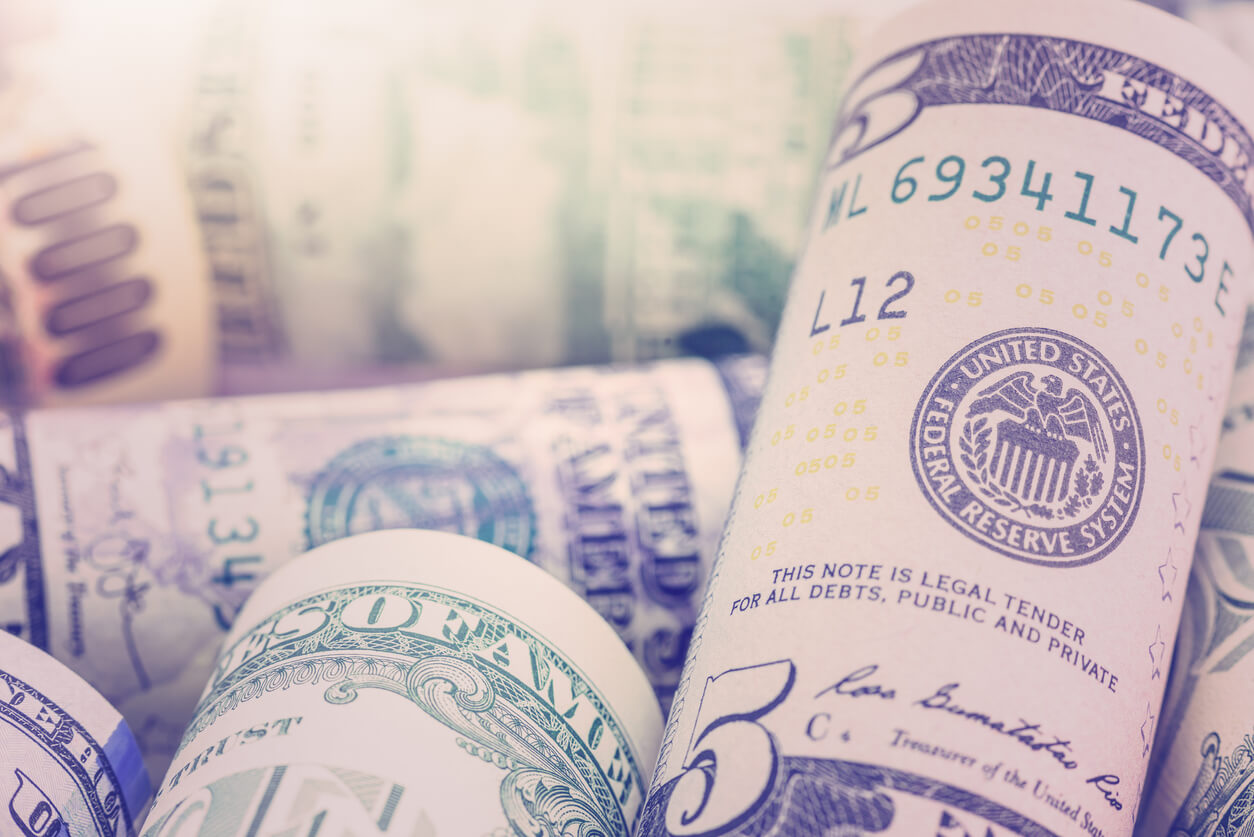 Strap yourselves in for another hectic week of major monetary policy announcements. It is the crucial meeting of the FOMC this week. After the hot US CPI print, could the hike be as big as 100 basis points? We are also on the lookout for several other major central bank decisions too. Watch for the People’s Bank of China (PBoC), the Bank of Japan (BoJ), the Swiss National Bank (SNB) and the delayed Bank of England (BoE) decision. We are expecting to see further rate hikes from the SNB and the BoE., but the question is, how big? 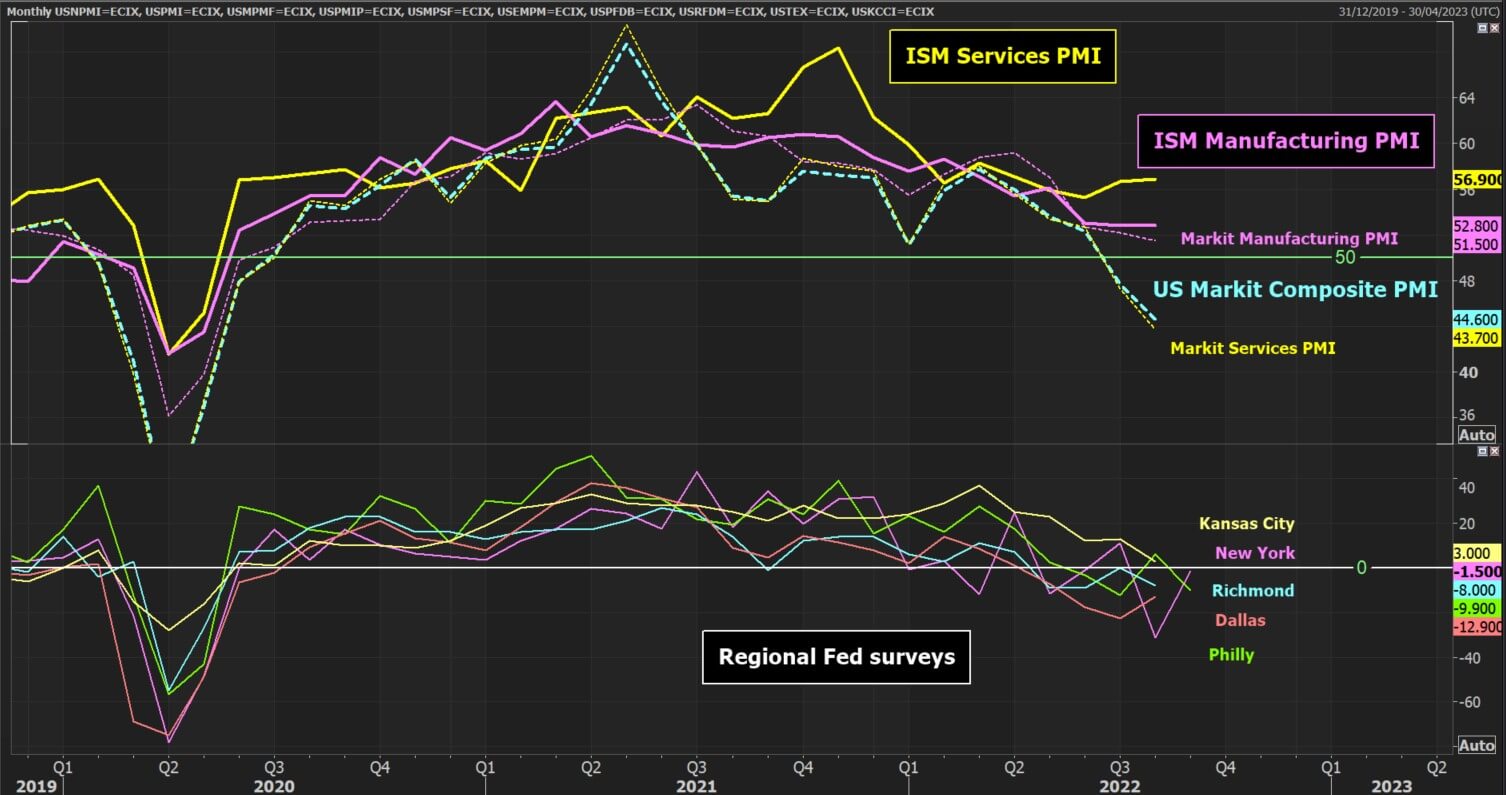 The USD was boosted once more versus major forex last week by the higher-than-expected core and headline US CPI inflation. Suddenly the chat was not just of 75 basis points (bps), but 100bps would be on the table. The consensus is still looking for 75bps but it could be a hawkish 75bps. We will also be watching for the dot plots and where Fed members see the peak in rates next year. Fed funds futures currently sit at a peak of around 4.4% in March 2023. Elevated volatility is assured, but we favour the USD to quickly find support even if there is any near-term weakness in the coming days.

After the recent Bank of Canada decision which left CAD traders fairly disappointed, the emphasis will be on inflation this week. US inflation came in above expectations, so the forecast drop in Canadian inflation will be closely watched. An upside surprise should help to support CAD positions.

Near-term rallies continue to falter on commodities. There has been a significant underperformance of Gold versus Silver in the past week. However, if silver hits the buffers, it could be at risk of some sizable corrective pressure. A hawkish Fed could be the catalyst.

Wall Street has been under pressure since the hot US inflation data last week. The risk is that a hawkish Fed drives another key risk-averse move on equity markets. With US markets close to some important supports this could be another key breakdown.

The hawkish leanings of the ECB continue, but one of the key factors to watch in the coming days and weeks is how the ECB policy path is framed alongside the energy price caps. With this in mind, the Eurozone consumer confidence data will be watched. After a surprise pick-up last month (albeit from record lows). There have not been two consecutive months of improvement for 15 months.

An unexpected fall in the headline UK CPI (due to lower fuel prices) would have been welcomed in the halls of the Bank of England. However, this does little to mitigate the growing wage pressures. This leaves the MPC with another tough decision in this week’s delayed monetary policy decision. The announcement of fiscal support for consumers and businesses with their energy bills could push a more aggressive tightening. A 75bp is possible but the consensus is sitting around 50bps. However further hikes in the months ahead could see rates at 3% or above by the year-end.

European indices remain under pressure on the deterioration in risk appetite in the wake of the hot US inflation data. Hawkish moves from major central banks this week could drive another leg lower.

The JPY remains the worst-performing major currency. The key question coming into the BoJ meeting is whether there will be some sort of intervention to alleviate the weakness of the currency. If there is, it leaves JPY open for a considerable short-squeeze rally.

According to RBA Governor Lowe, the central bank is committed to getting inflation back down to the 2% to 3% target range, but they are not on a pre-set path. Lowe has said that at some point they will not need to hike by 50bps, and they are getting closer to that point. Rates are too low for now, but either 25bps or  50bps will be considered at the next meeting. This all amounts to a dovish lean taking hold at the RBA.

With a lack of market-moving New Zealand data, the NZD will look towards the AUD to drive its moves this week. 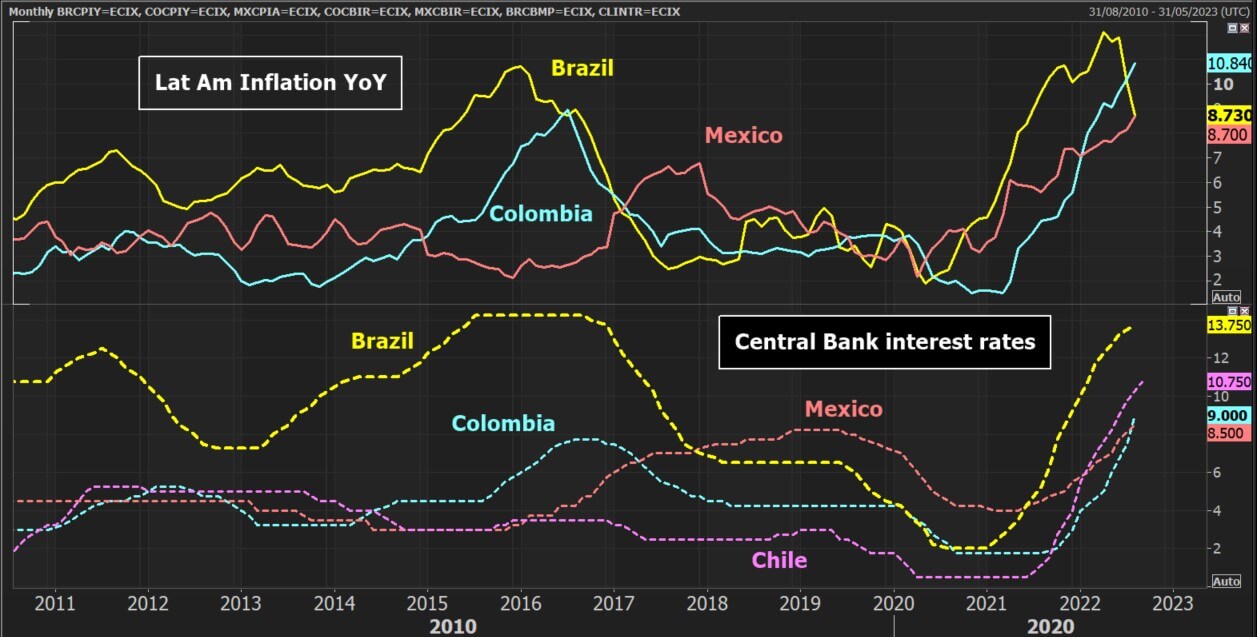 With inflation starting finally fall back in recent months, the pressure is being relieved on the Brazilian Central Bank to hike. Hikes of +100bps earlier in 2022 have been tempered with +50bps hikes in the last two decisions. Whilst 14% is a possibility, could the central bank be about to sit on its hands? The real has been performing well versus Lat Am peers in recent weeks and has been only losing marginal ground versus the USD.

Mexican Retail Sales are expected to fall by -0.5% in July and reduce year-on-year sales to 3.5% (although arguably that would be considered a reasonable number in light of the broad economic backdrop. The concern is though that inflation (and especially core inflation) is forecast to jump again. This will keep the pressure on the Mexican central bank to hike rates further.

USD/MXN –the near to medium-term outlook on USD/MXN remains mixed. With the USD strengthening once more this has bolstered the support of a month-long trading range. The support is at 19.750/19.850 and if the USD strengthens off the Fed this week a test of the resistance around 20.200/20.300 could be seen again.