Week Ahead: Retail sales, inflation & GDP in a packed week

It is a packed week of tier-one data. Traders will be preparing for retail sales, inflation and GDP data from several major and LatAm economies. Volatility will be elevated across markets 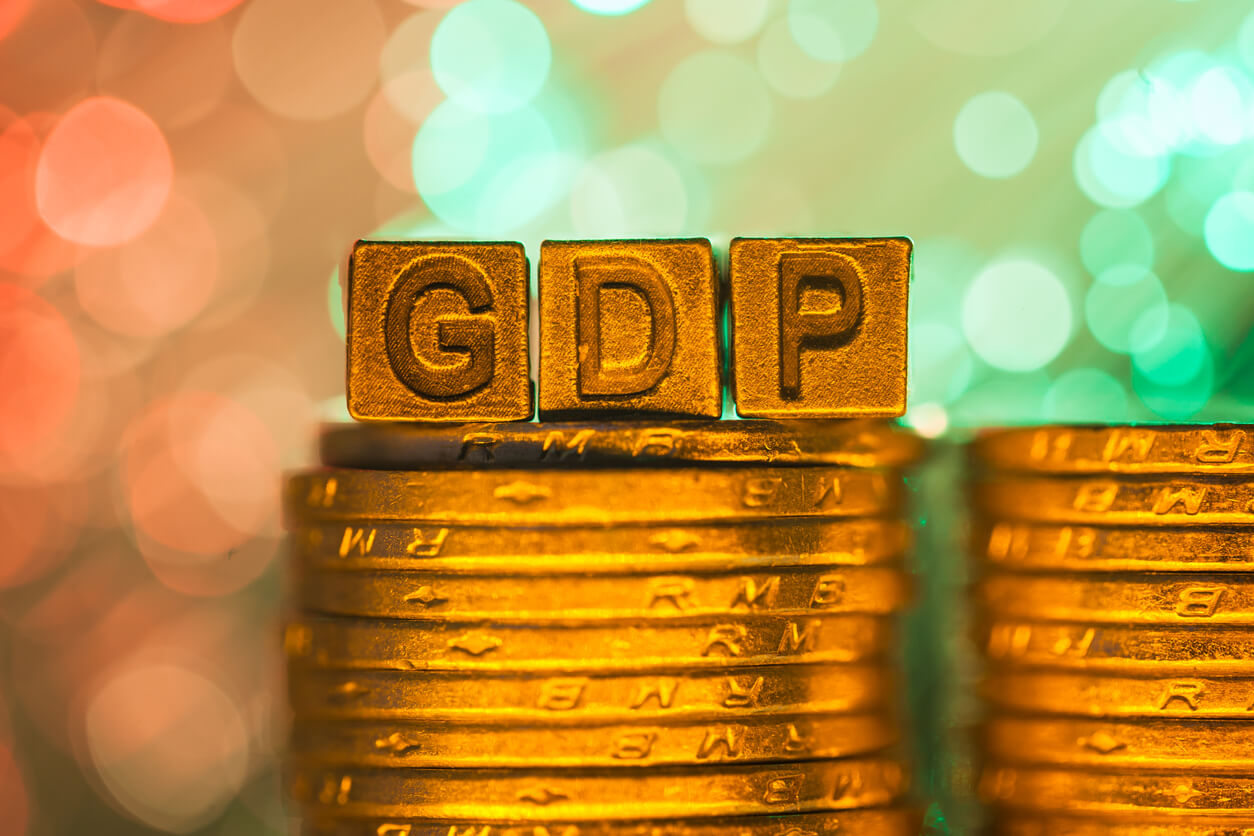 Aside from the US CPI, it was slim pickings for data traders last week. However, we now move into what promises to be a far more interesting week. The economic calendar is stacked with tier one data.

US Retail Sales and Industrial Production will be important for USD traders, in addition to the Fed minutes. GBP could be in for a volatile week with UK unemployment, inflation and retail sales on consecutive days. Inflation also comes from Japan whilst another rate hike is expected from the Reserve Bank of New Zealand. In Lat Am, all eyes are on Q2 GDP for Colombia and Chile. 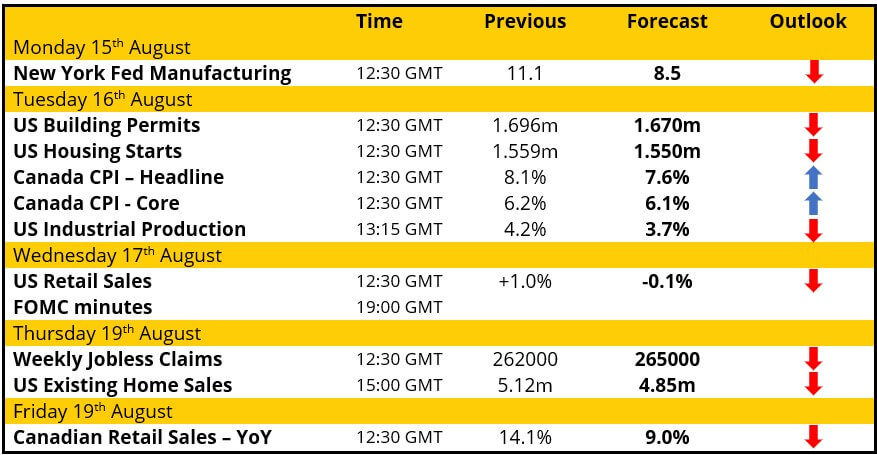 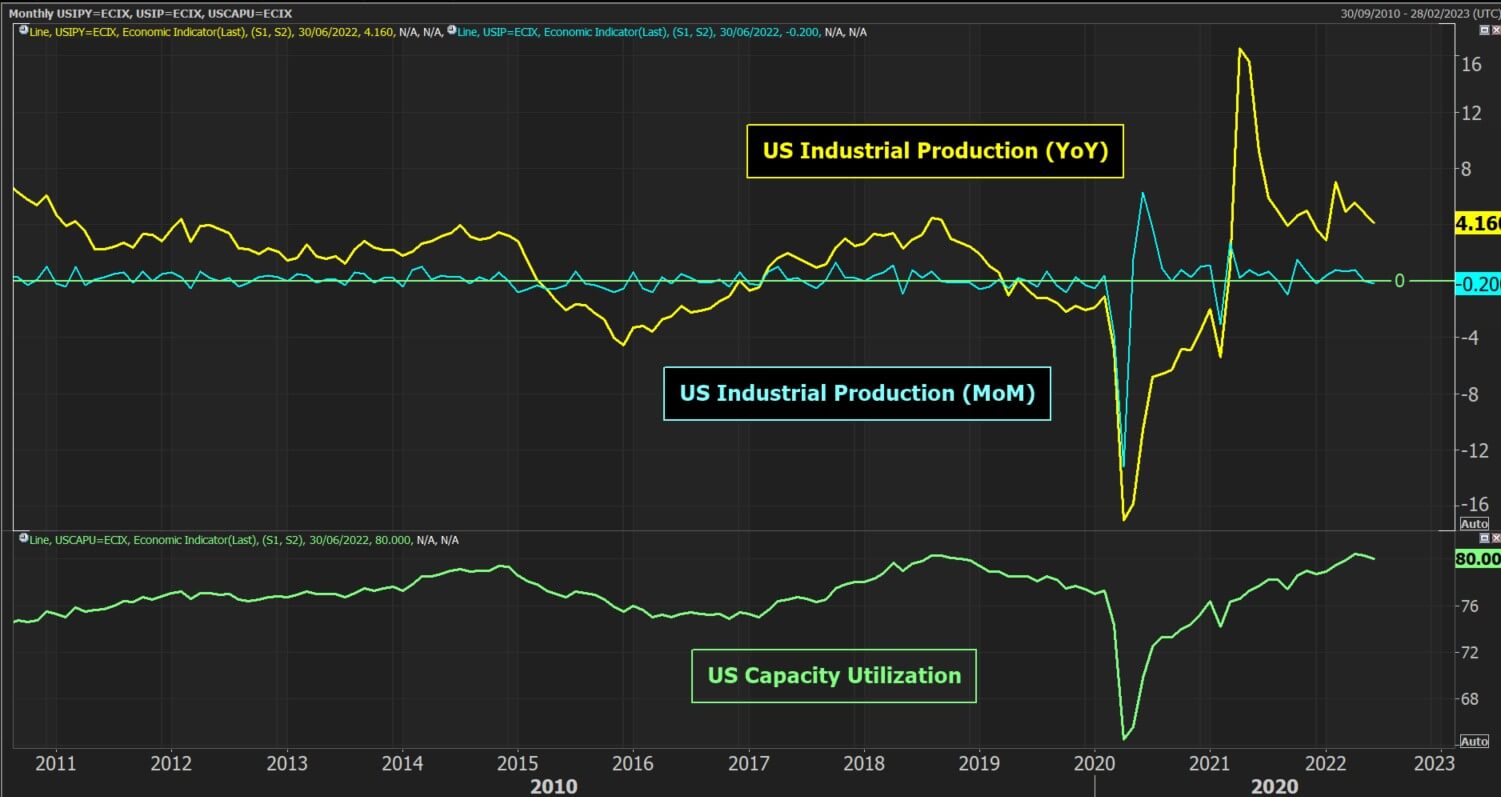 The USD has been weakening again as data has continued to reflect peak inflation has been reached. However, Fed speakers remain staunchly hawkish with “the job not yet done”. The focus turns more towards economic activity early in Q2 this week, with retail sales and industrial production for July. Both are expected to be sluggish. This may begin to weigh on the outlook for Q2 GDP which is currently sitting around +1.2% annualised.

The question for traders is whether the USD correction continues lower this week. We see 105.00 as a gauge for Dollar Index. Continued trading below this old support will add to a corrective outlook.

Inflation will be the big focus for CAD traders this week. The forecasts suggest Canada will follow the US in its signs of reaching peak inflation. Hitting (or below) headline and core CPI could subsequently weigh on CAD.

Earnings season is all but done now, so Wall Street may need broader market catalysts. US Treasury yields are holding ground, but real yields are rising. Although technical momentum remains strong, this could begin to restrict the positive momentum of the Wall Street rally.

Eurozone data is largely revisions this week (2nd reading of Q2 GDP and final inflation). However, the German ZEW is read through to German economic growth, so will be watched. Core/periphery yield spreads continue to fall and are back around one-month lows. Yields on Italian government bonds over German are just over 200 basis points now (below 195bps would be a positive signal). This has helped to support the EUR in the past week.

A 50bps hike from the Bank of England was accompanied by the projection of a multi-quarter recession on the way. We get an idea of how the UK economy is faring into Q3 this week. Inflation will get the headlines, with 10% headline CPI looming as a possibility. Retail sales are expected to remain under pressure in July. Consumer spending measures are under pressure from the huge rise in the cost of living. This will add to pressure on the Bank of England which will find it increasingly difficult to fight inflation in the coming months.

The FTSE 100 has been lagging in the risk recovery, with gains of under +5% in the past month. Of the major European markets, it is interesting to see the French CAC leading the way, up almost +10%. The DAX is in the middle at c. +7.5%.

US yields remain stubbornly high despite falling inflation. With such a strong correlation for USD/JPY with the 10-year yield spread of USTs and JGBs, the recent divergence with USD/JPY (due to the decline in USD/JPY) may not last. We favour a rally in the USD/JPY to correct the divergence.

Australian unemployment is expected to remain at 3.5% this week. However, watch the Aussie on the back of the RBNZ decision (see below) as there may be an associated move with the Kiwi.

The Reserve Bank of New Zealand is expected to hike rates by another 50bps this week. This would bring the Official Cash Rate to 3.0%. Q2 headline inflation jumped to 7.3% with wage growth also higher. However, the path of further rate hikes could be revised lower. Concerns over economic growth, the tick higher in unemployment and exposure to a slowdown in China may leave the RBNZ more cautious about the path forward. A terminal rate of 4.0% may be reduced. 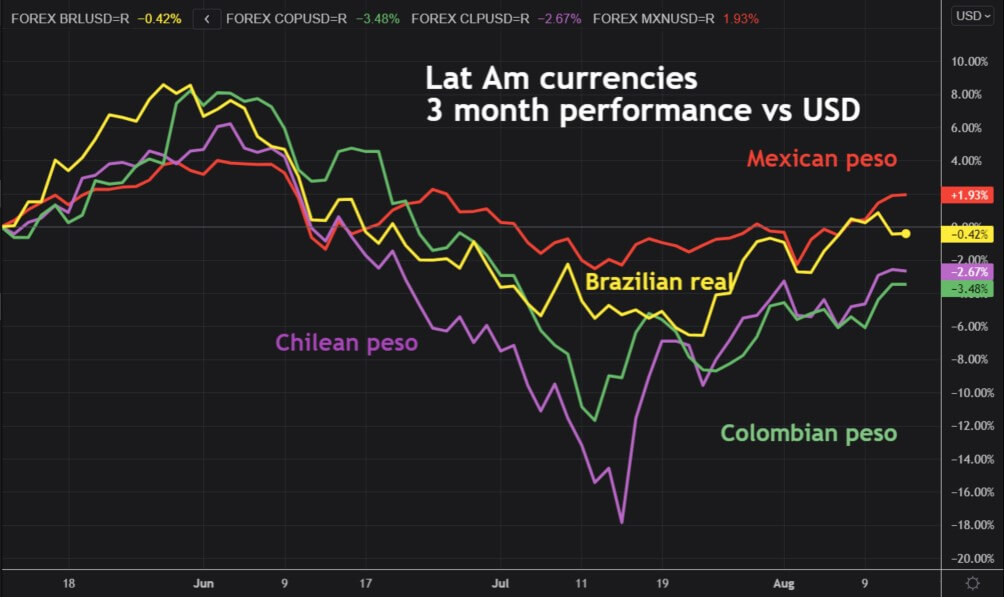 There is no significant Brazilian data this week. However, USD weakness has allowed currencies from emerging markets to recover.

Mexican Retail Sales are expected to falter slightly year on year. Any weaker than forecast result would weigh on MXN.