It is a quieter week on the economic calendar with the ISM Services the only significant US data. Elsewhere there are several central bank rates decisions including the RBA and the BoC.

It is a quieter week on the economic calendar. The tier-one US data are book-ending the week, with an eye on the US consumer, with ISM Services on Monday and the prelim Michigan Sentiment on Friday. The consensus is looking for ISM Services to drop slightly but remain in reasonable expansion territory, however, Michigan Sentiment looks set to drop back for the second month in a row.

Central bank interest rate decisions for the RBA and the BoC will also be closely watched. The loose ends of the final Q3 GDP are cleared up for the Eurozone, Australia and Japan. Chinese trade balance and CPI will impact market sentiment too. LatAm traders will be kept on their toes with a packed calendar of CPI and central bank rates.

With the US data just creeping ever lower and Fed members (most specifically FOMC Chair Powell) leaning towards a 50 basis points hike in December, there is momentum in the USD correction. It continues to be fuelled by the downside bias to US Treasury yields. With US yields and the USD still strongly negatively correlated, the US 10-year yield breaking decisively below 3.56% would be a confirmed break that would open further downside for the USD. This would leave the Dollar Index moving decisively below the August low at 104.64 and complete a big top.

Although the ISM and Michigan Sentiment will be watched, there is a lack of significant data this week. The focus will be on the final few days before the Fed blackout period begins and any Fed speakers on the schedule.

The cautious Bank of Canada is expected to hike rates by just 25bps this week. Previously it had been leading the Fed in hiking but has increasingly retreated in recent weeks. This is weighing heavily on the CAD performance.

The continued slide in Treasury yields and the corrective outlook for the USD is still broadly supportive for commodities and specifically metals prices. Silver continues to outperform gold during the risk-positive phases.

The OPEC+ decision on production is expected to continue the current production levels. Oil has been supported by demand-side news with China slightly easing its COVID restrictions. However, broadly the ranging outlook for Brent Crude oil under $100 is likely to continue.

The risk recovery remains intact whilst US bond yields continue to move lower and the USD is corrective. This plays into the recovery on Wall Street. We continue to believe that there is upside potential in the recovery for NASDAQ but it still looks to be a move with the handbrake on.

As the ECB meeting in the December edges closer the consensus is looking for a 50 basis points hike. The recent decline in inflation (it is still too early to know if this was the peak) and concerns over impending economic contraction are driving expectations of a less aggressive approach from the ECB. The EUR continues to be supported by more encouraging core/periphery yield spreads which has trended lower over the past six weeks.

The UK may have a fairly worrying list of fundamental factors that should be weighing on GBP, however, whilst risk appetite remains positive, GBP is acting as a pro-cyclical currency and continues to recover well. As the winter gets colder and deeper, this performance may not last.

The recovery trends are holding on European indices. The question is just how far the moves can go before profit-taking sets in and there is a near-term corrective move. December is traditionally a strong month for equities. However, there are a few signs of trend exhaustion starting to develop.

All whilst bond yields were rising around the world, the JPY underperformed badly throughout much of 2022. However, with yields now collectively falling, the JPY is in considerable ascendency. Yield spreads with JGBs are tightening with interest differentials more favourable for the JPY. Whilst yields continue to fall, we expect JPY will perform strongly.

There is some division in the consensus over the size of the RBA rate hike this week. A 25bps hike is likely, and there is a possibility of 40bps too (which would get the rate back into line with quarter per cent numbers). As such the reaction to the RBA could see elevated volatility. AUD has tended to perform much better recently with swings of positive risk appetite.

The NZD continues to be the best performing major currency (along with the JPY). The continued hawkish stance of the RBNZ is sustaining the recovery momentum. If risk appetite remains positive this week, we expect the recent trends of kiwi outperformance to continue. 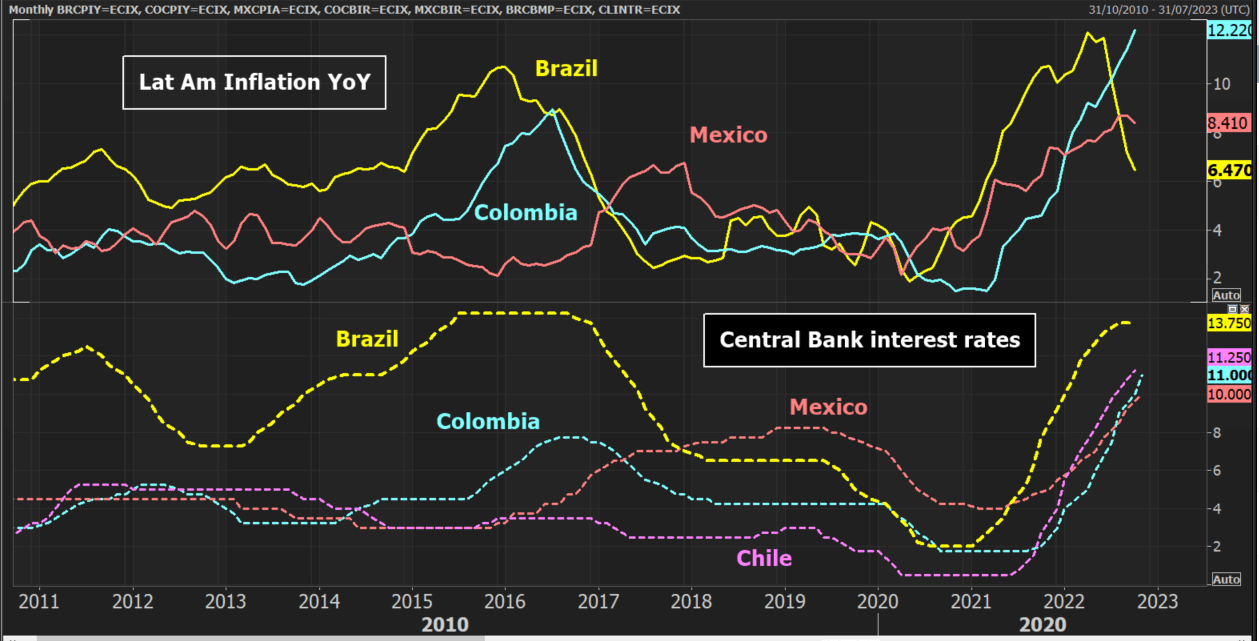 As Brazilian Government bond yields have fallen back in the past week, the BRL has engaged in a near-term recovery. The expectation of a consistent reduction in inflation whilst the central bank rate is expected to remain lofty at 13.75% should help to underpin the BRL, for now. It will be interesting to see how long the central bank will keep rates this high. Any sign of a rate cut may begin to weigh on BRL.

The continued and steady strength of the MXN remains impressive. With inflation set to fall again, the central bank should be on hold, for now. However, the prospect of rate cuts may start to become an issue that begins to weigh on the MXN in the coming weeks.

USD/MXN – The MXN has strengthen to levels not seen since March 2010 as USD/MXN trends decisively lower and has dropped below the 19.250/19.400 support area (which is also now the initial resistance). The next key support of note is around 18.550 from February 2010, the level just before COVID.