After the Thanksgiving lull, the economic calendar swings back into gear with a raft of tier-one data. The highlights include Eurozone inflation, manufacturing PMIs and a crucial Nonfarm Payrolls. 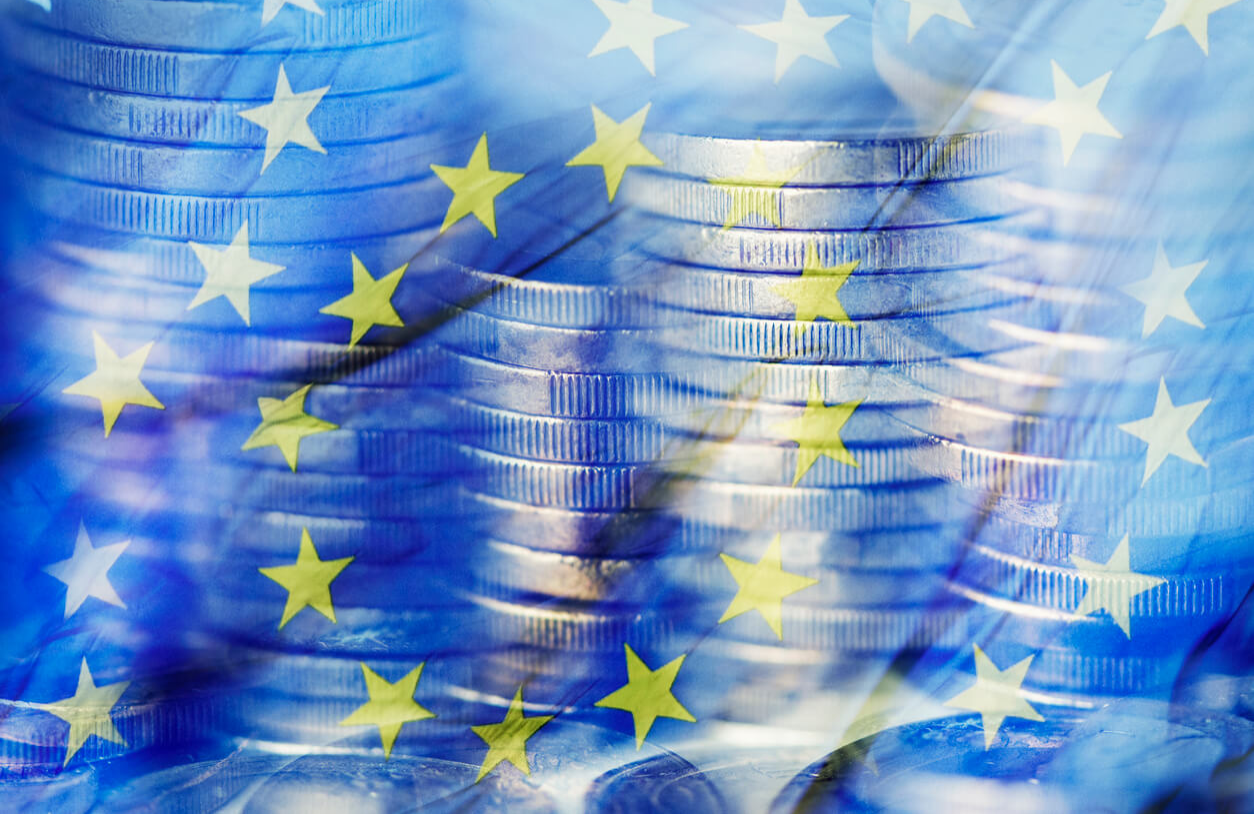 After the calendar went quiet at the end of last week and the trading lull of the US Thanksgiving holiday, the data cranks up once more this week. It is a raft of inflation, PMIs, and unemployment data from across the regions.

For the major announcements, Eurozone inflation is expected to continue higher, adding to the headache for the ECB. In the US, will data continue to paint a picture of gradual economic deterioration? After last week’s shock negative surprises in the flash PMIs, the focus will be on whether the ISM will move into contraction. Jobs data also looks to be turning sour as ADP and Nonfarm Payrolls are expected to falter. 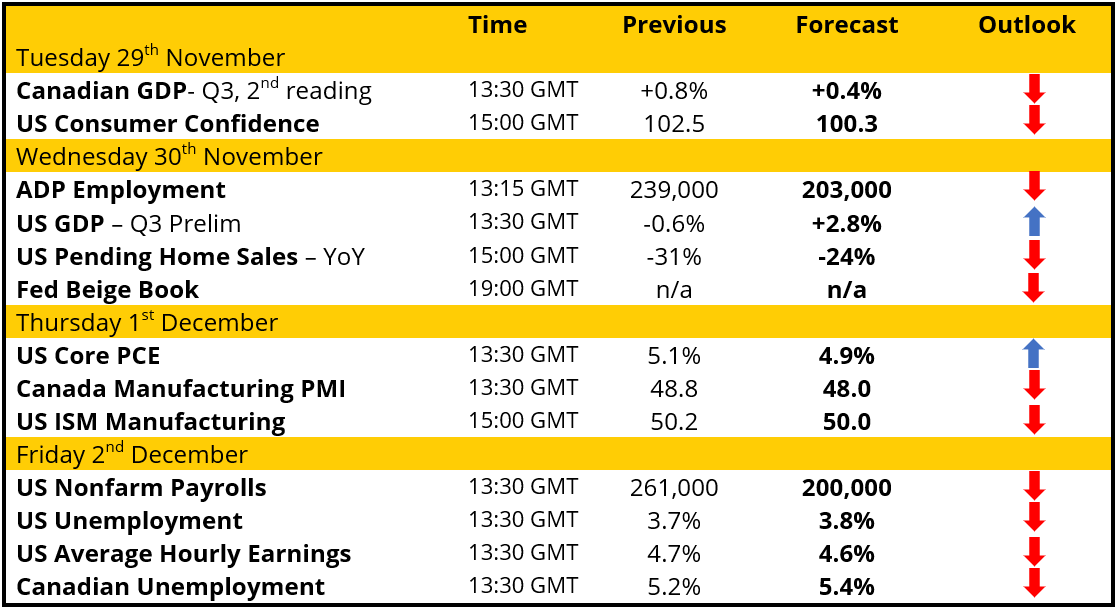 The USD has had a bad few weeks, turning corrective across the major forex pairs. Economic data is increasingly deteriorating and also often surprising to the downside. In the wake of the dovish lean of the November FOMC minutes, this is adding momentum to the correction.

Looking at the consensus for this week’s tier-one data, the picture is not looking any rosier. Consumer Confidence is falling, housing data continues to deteriorate and the ISM Manufacturing is expected to move into stagnation. Add in deteriorating jobs data on ADP and Nonfarm Payrolls faltering (payrolls growth around two-year lows) and the outlook for the USD appears set for now. If Treasury yields continue to track lower, so will the USD.

With the Bank of Canada already more cautious in its tightening, the CAD continues to be the least volatile of the major currencies, and closest to tracking the performance of the USD. There is little reason to believe this will change any time soon. The deterioration in the performance of oil leaves little to drive CAD strength. There may be some added interest in CAD with GDP, the Manufacturing PMI and unemployment this week, but we are not positioning for any volatile moves.

With Treasury yields slipping back lower in recent sessions, the rally in commodities has taken hold once more. With such strong negative correlations, any moves in yields remain vital for the outlook on precious metals. Lower yields help to support metals prices.

There has been increased chatter about OPEC+ production levels in recent weeks. Any newsflow around this will impact oil. Saudi’s continued insistence on no change to levels could add some support to oil. However, as the US economic data increasingly underwhelms, a slide towards recession is developing. This continues to weigh on oil.

After the lull of Thanksgiving last week, the chatter will be about how companies have performed on Black Friday and Cyber Monday. This could elevate some interest for retailers especially. However, increasingly, for the coming weeks and until the end of the quarter, we may find that macro is the big driver of Wall Street. Therefore, if yields continue to fall, expect a Wall Street rally. We could also see the tech-heavy NASDAQ leading in this scenario too.

There will be a key focus on just how hot the inflation data comes in for the Eurozone. The German HICP will give early clues, but it looks like another significant jump in Eurozone inflation in November. Some members of the Governing Council have been sounding slightly less hawkish recently and the recent minutes of the last ECB meeting suggested growing concerns about a recession. However, the inflation pressures may continue to force the hand of the ECB into hiking by another 75bps in December.

The EUR continues to perform well in the recovery, supported by the better-than-expected flash PMIs and German Ifo Business Climate. With the core/periphery yield spreads continuing to narrow, the positive momentum should ensure that corrections should be supported.

GBP continues to confound some prettyr dreadful fundamentals for the UK. The performance is holding up relatively well across its major currency crosses, with Cable leading the way in recovery. There is a sense of relief that the “moron risk premium” is reversing following the further calming of the UK Autumn Fiscal Statement. Whilst we remain sceptical of GBP’s medium-term ability to continue to recover, the near-term positive momentum continues, for now.

The German DAX continues to be the big driver of the performance of the European indices. If US Treasury yields continue to falter and the USD correction continues, these fuel risk appetite. These are the conditions for the DAX to continue to perform well. FTSE 100 is a little more steady, but is also in strong recovery, helped by the continued strong performance of the heavily weighted energy and financials sectors.

Bond yields of major governments have fallen in recent weeks. This has allowed a significant recovery in the performance of JPY. As the spreads of major bonds yield versus JGBs have narrowed, the favourable yield differentials have driven a decisive recovery in the yen across major forex. If yields continue to fall, we expect JPY to remain strong.

The AUD has rallied decisively as the USD has faltered and risk appetite has notably picked up. If Treasury yields continue to fall, then the AUD will sustain its recovery.

The Reserve Bank of New Zealand hiked by 75bps and delivered what could be described as a hawkish hike (there could be potentially another 125bps of tightening until the terminal rate of 5.50%). This leaves NZD at the forefront of the performance of the forex majors as the USD continues to slide. 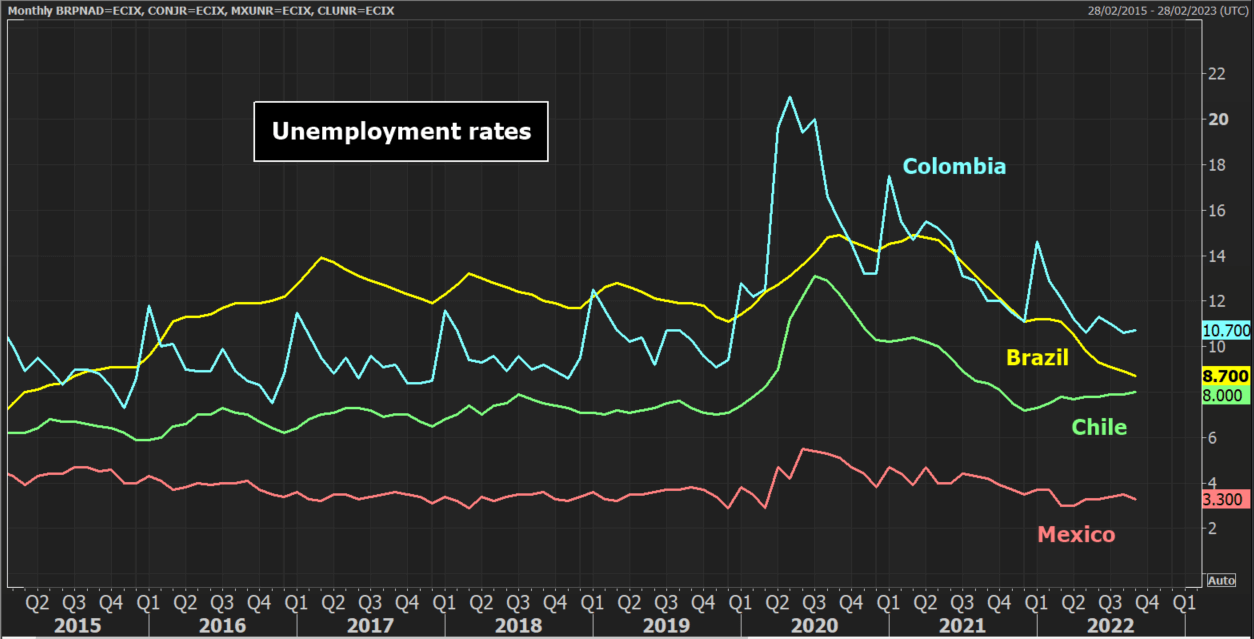 The BRL has managed to stem the tide of selling versus the USD, at least for now. Brazilian Government bond yields continue to trend in the wrong direction (higher) and this is leaving BRL as an underperforming LatAm currency.

In a basket of LatAm currency volatility, the MXN remains a pillar of stability. The trend of gradual strength and outperformance has been quietly questioned but remains intact. Reaction to an expected increase in unemployment will be interesting, but given the macro backdrop, the jobless rate remains particularly low and under control.