With bond yields moving higher again, once more we are seeing Wall Street driven lower by the growth stocks. However, during this wild phase, there is an index that is standing tall. 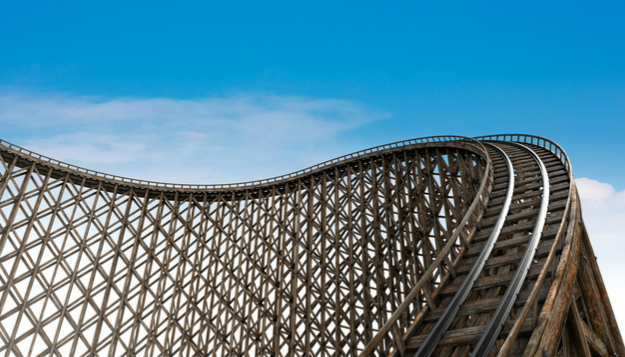 The start of 2022 has not been an easy ride for equity markets. Anyone trading indices who was thinking of a nice gentle start to the new year will have had a rude awakening in the past few weeks. Indices on Wall Street have been thrown around especially hard. The reason is due to higher US bond yields and the weighting of big tech. We believe that this difficult phase of trading could still be a feature in the weeks to come. However, there are still markets to trade that are not so high octane.

All signs are pointing to higher volatility in 2022. Bond market volatility is higher (as central banks position for higher interest rates). This is feeding through to equity markets.

Already in the opening three weeks of the year, the index volatility of the S&P 500 is on a higher plane. Looking at the chart of the VIX Index (which measures the volatility of S&P 500 options) the last few months have been giving us some interesting signals.

September was a bearish month for equities, and we saw volatility climbing strongly higher. A Wall Street rally in October was met with far lower volatility. Volatility then picked up significantly in November after the Federal Reserve signalled the taper.

The next key move has come in the past few weeks. As US bond yields have picked up sharply (the 10-year yield has risen by 30 basis points from 1.51% to 1.81% in under three weeks) volatility in equities has increased again. Higher volatility comes with selling pressure. The VIX is now consistently above 18/20, whereas in October when equities were positive, it was low, around 15/16. If volatility continues to rise, then Wall Street will continue to struggle.

NASDAQ is the rollercoaster ride

Looking at the performance of major indices in the past month, we can see that NASDAQ is on a wild ride. Going from the best performing market just before Christmas, the performance has slumped in the past few weeks and is now the considerable underperformer.

The reason for the NASDAQ decline is the sharp rise in US bond yields. Rising yields hit the prospects of low-yielding/high growth stocks that dominate the NASDAQ. Given the high weighting of tech stocks in the S&P 500, this also weighs down the broader index for Wall Street.

Looking at this relative performance chart also reveals the impressive performance of FTSE 100, even in the face of the sharp declines on Wall Street.

One impressive feature of the strength of Wall Street in the past 12 months has been the uptrend channels on NASDAQ and S&P 500. However, these impressive channels are now being seriously strained. We believe that this has implications moving forward.

In the past couple of weeks, the NASDAQ 100 futures (MT5 code: NAS100ft) has already made two intraday breaches of what has been a 19-month uptrend channel. Today we are seeing a third breach. If the market closes below 15,500 it would confirm the channel breakdown.

However, this would also complete a big top pattern that has been threatening for a while. The implication would be a, 1100 tick move lower, which could even mean a retreat to the September low at 14,367. Already we see momentum confirming the pattern with the RSI at 3-month lows.

We believe that this is still early days in what will prove to be a choppy phase of trading on NASDAQ. The resistance around 16,000 is also now increasingly important.

The S&P 500 futures (MT5 code: SP500ft) are also under negative pressure this morning. The channel is being severely tested, but we believe that it will ultimately break, leaving the market in a trading range.

The struggling momentum (RSI now consistently between 35/60) reflects more of ranging conditions. For now, we view support at 4492 and resistance at 4807 as key levels that the market is likely to trade between.

FTSE 100 is the steady rock amongst indices

The selling pressure that these major Wall Street indices are facing has been in stark contrast to the performance of the FTSE 100. For so long, FTSE 100 has been a market to avoid whilst Wall Street has soared higher. However, with the flow out of growth stocks moving into value stocks (higher-yielding, lower valuation), markets such as the FTSE 100 (which is jam-packed with value stocks) can outperform.

FTSE 100 (MT5 code: UK100) has broken out of its uptrend channel and moved to two-year highs this week. Technical signals are strong and any weakness should be seen as a chance to buy.

The near-term selling pressure has pulled FSTE 100 back this morning, but even in the negative sentiment of today’s moves, it is once again outperforming other major indices. We would view any pullback into the 7400/7520 support band as a great opportunity to buy FTSE 100.