Two major currencies stand out against the surging USD

A report looking into the strong relative performance of the Canadian dollar and sterling. This performance is generating some trading opportunities on forex crosses. 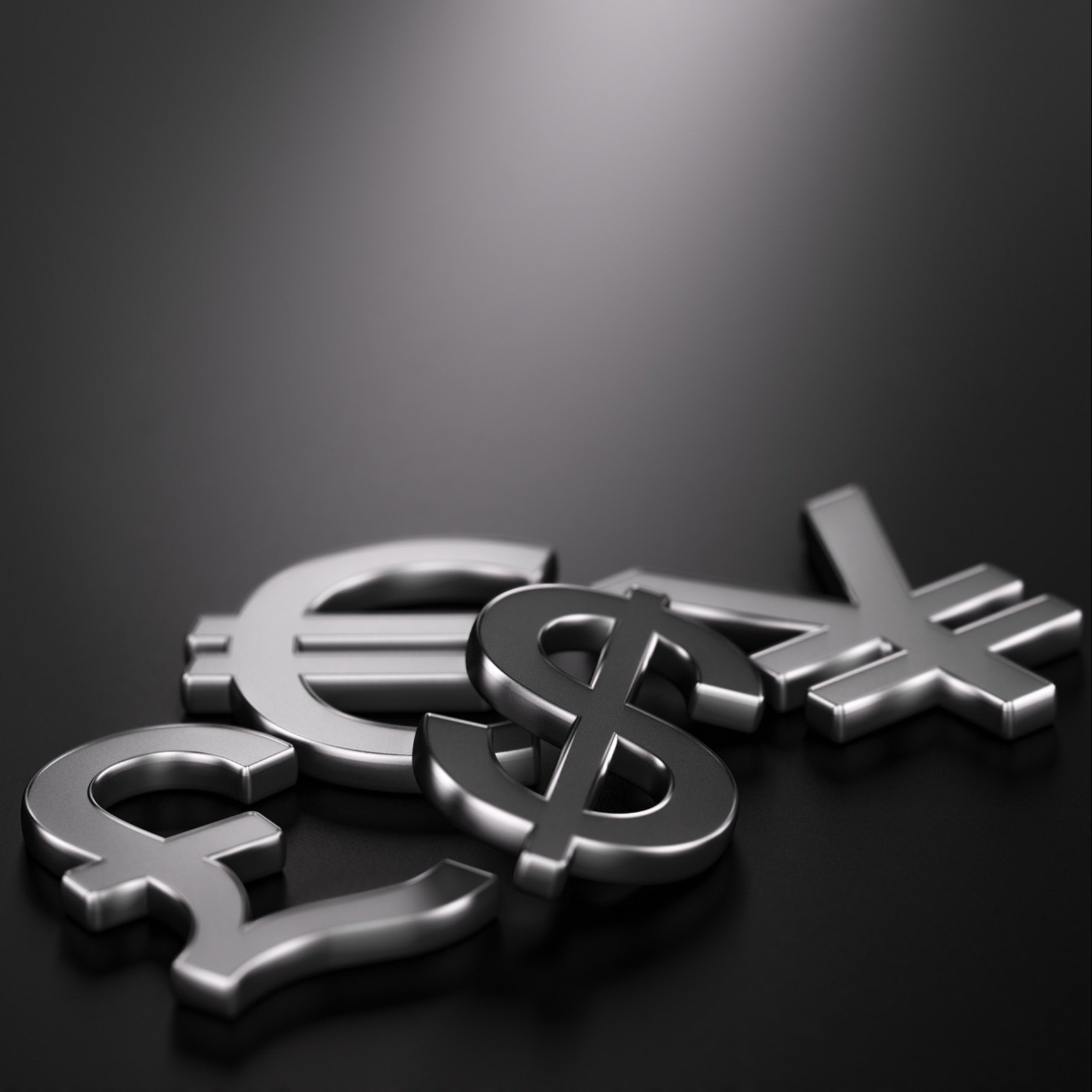 The strengthening of the US dollar (USD) has been the dominant story of major forex in 2021. However, two other major currencies have also been strong relative performers in recent months. The Canadian dollar (CAD) and sterling (GBP) have both stood up well against a surging USD. Their ongoing performances give opportunities to trade the “crosses” against some of the other major currencies.

CAD and GBP are strong performers amongst the majors

The first chart shows performance relative to USD in the first three months of 2021. It shows how the performance of major currencies has been determined by whether they have been “safe-havens” or currencies considered to be “higher risk”. Low-yielding (or negative-yielding in some cases) safe-haven currencies such as the yen, Swiss franc, and euro have all been the worst performers. In contrast, the higher-yielding currencies such as the Aussie, sterling, and specifically Canadian dollar have performed much better. 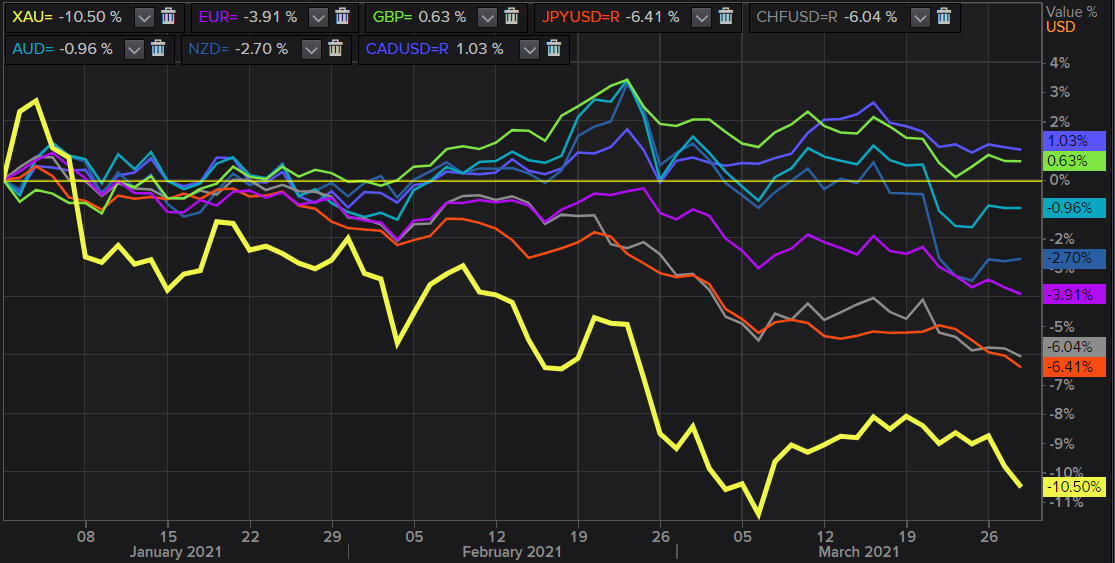 Even over the past month, where USD has taken on a renewed surge of strength, we see CAD still outperforming. GBP may have struggled slightly in this period, but has still held up relatively well. Whereas the safe havens currencies continue to be decisive underperformers, with JPY, CHF and EUR consistently tracking lower.

There are two interesting other points of note of this chart. Firstly, the drastic underperformance of NZD after the government policy shift on housing in mid-March. Secondly, that Gold has held up extremely well until the last few days of March. 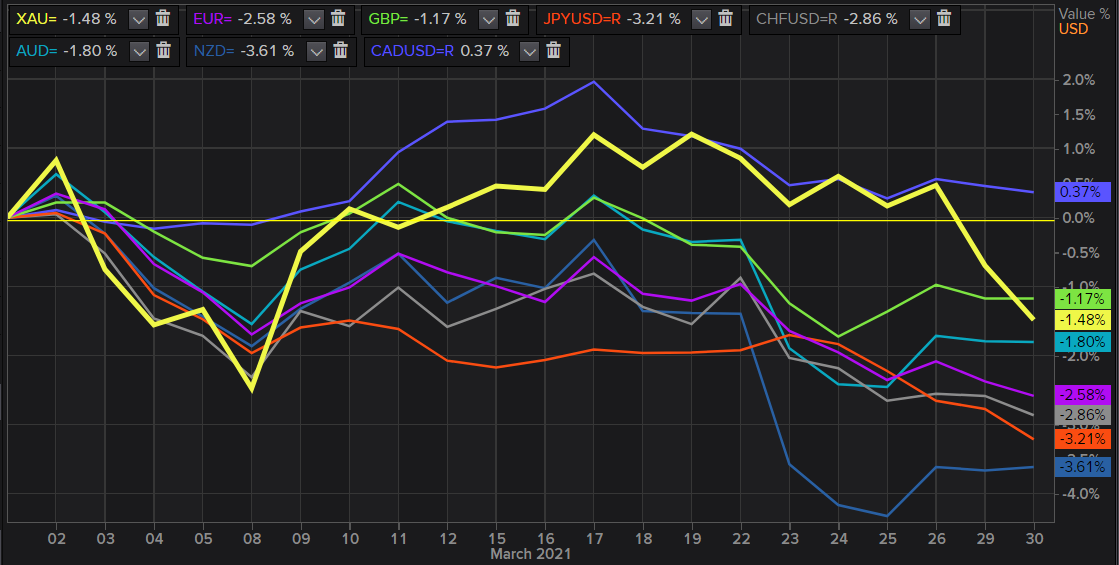 We continue to see the euro struggling with a 3rd wave of COVID, renewed lockdowns, and stuttering vaccination programs. In contrast, strong oil price gains and rising bond yields have helped to support the Canadian dollar.

Subsequently, with the continued divergence in the performance of EUR and CAD, we see a breakdown below support on EUR/CAD today. 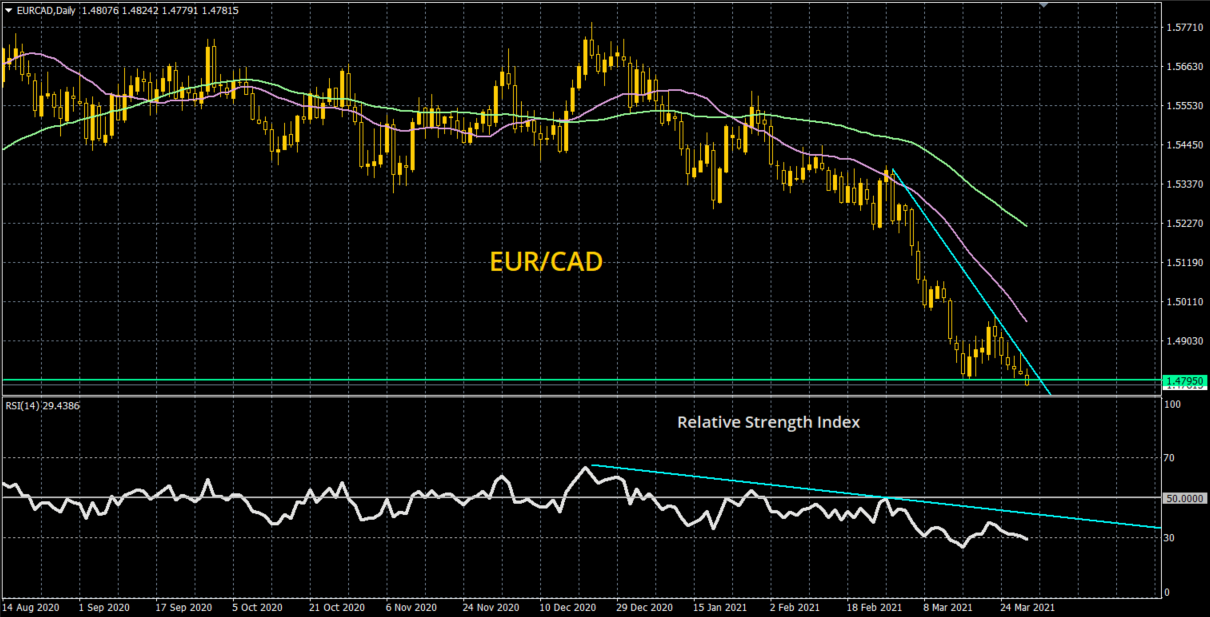 A breach of the support at 1.4795 has opened further downside. Momentum remains negatively configured, with the Relative Strength Index (RSI) consistently 40 and below. This suggests that near-term rallies should be seen as further chances to sell. A confirmed close below 1.4795 suggests the cross is on the way towards the next trading band 1.44/1.47.

After a bit of a wobble last week, GBP bulls seem to be finding their feet again. This is driving both GBP/JPY and GBP/CHF higher, with both crosses close to breaking out.

GBP/JPY bounced off uptrend support and with strong daily candlesticks is looking to test 152.50 resistance. A closing breakout would open upside towards the 2017 high of 156.50. Momentum looks well set up for this move and looks to have renewed upside potential. There is also now strong medium-term support around 148.00/148.50 to buy into any near-term weakness. 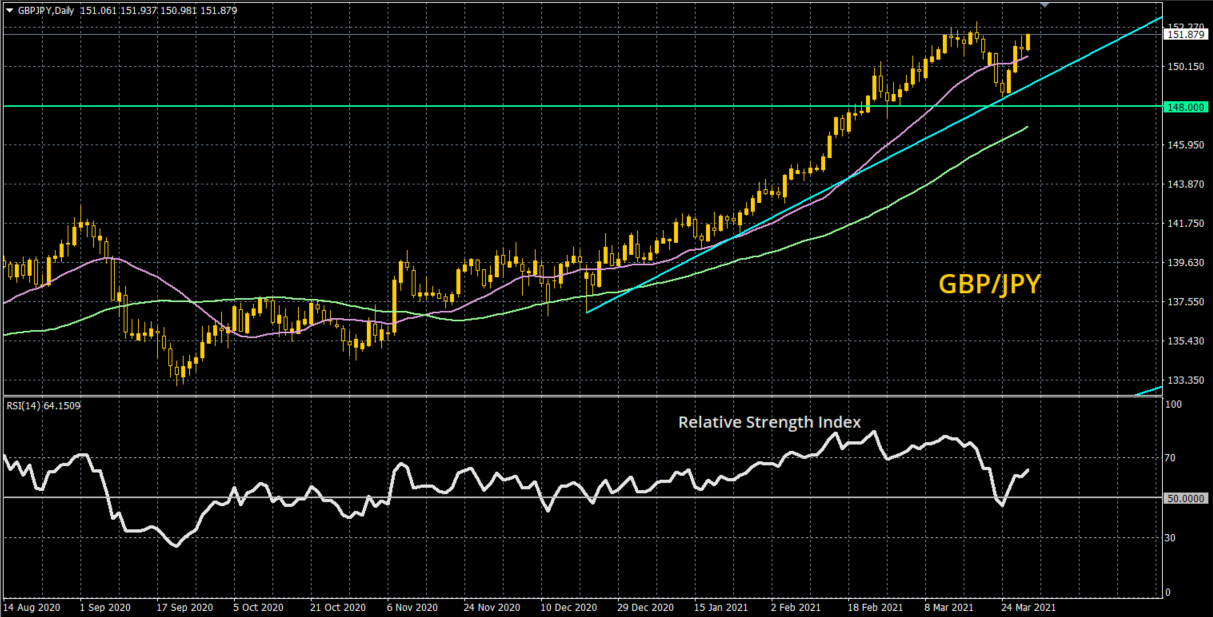 Finally, the chart of GBP/CHF is arguably even more bullish than GBP/JPY and looks primed for a breakout. A retreat to a multi-month uptrend has helped to renew upside potential on the RSI momentum indicator. A closing breakout above 1.2990 would now open the next leg higher towards 1.33/1.34. With the uptrend and the reaction low in place, this leaves good support at 1.2770. 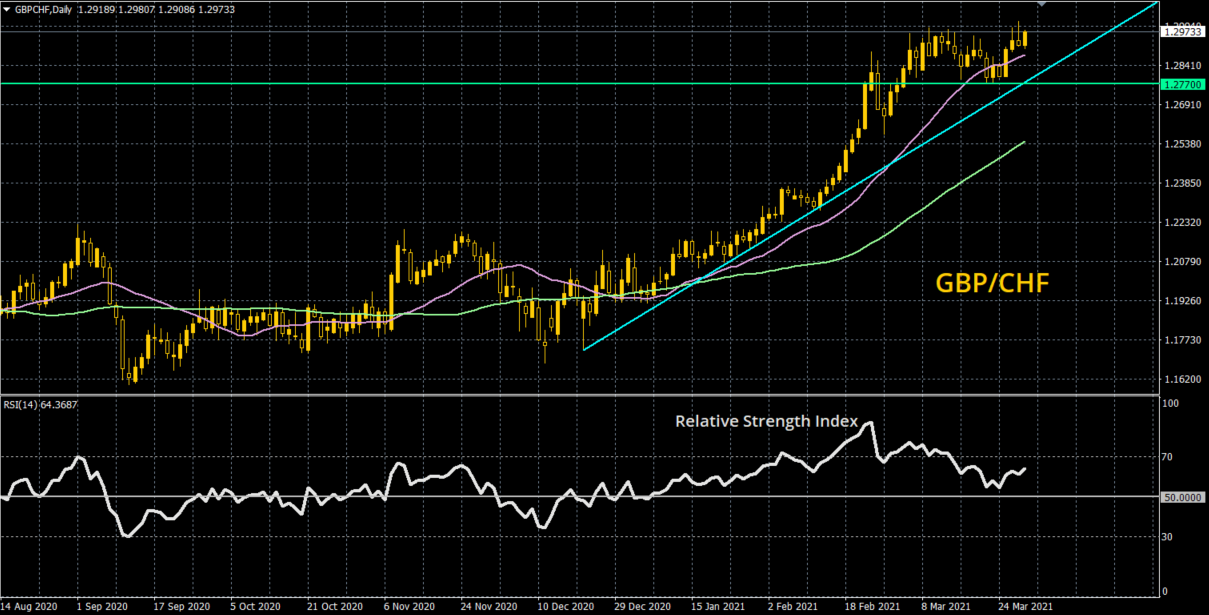