The impact on forex if Russia were to invade Ukraine

We look at the implications for major forex markets that would come if Russia did invade Ukraine. One cross we would consider is the downside on EUR/JPY 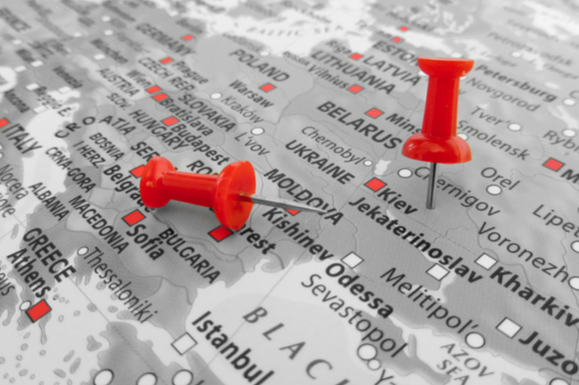 Geopolitical tensions have increased in recent weeks as the numbers of Russian troops stationed at the border of Ukraine have expanded. There was a moment last week when there were suggestions that troops were being withdrawn. This was the moment for Russia to show the world that they were not interested in creating a war scenario. However, this moment has passed and supposedly the number of troops has increased since then. Whilst President Putin appears to revel in the art of subterfuge, there is a very real prospect of a Russian invasion. What would that mean for major forex?

An invasion would lead to sanctions

Although it is not our base case expectation, a Russian invasion of Ukraine still has a high degree of likelihood.

For what it is worth, we do not believe it is in Putin’s interest to go through with an invasion. Merely the threat would likely be enough to achieve the aim of preventing Ukraine from joining NATO. Furthermore, we believe that Putin would much rather create uncertainty than realize the invasion. “It is better to travel than to arrive”.

However, if Russia does follow through with an invasion there would be a considerable response of economic sanctions enacted by the west. Sanctions would likely include:

The main implications for financial markets would be:

There has been a mixed outlook on major forex for several weeks now. What is interesting though is that forex markets appear to be unconcerned at the moment regarding the prospect of conflict in Ukraine.

After a sharp jump in the wake of the ECB in early February, there has been a mild bias towards EUR slipping back. However, whilst most major currencies are picking up against the USD in the last couple of weeks. The only exception appears to be the Canadian dollar.

If an invasion happens: Risk negative for forex and EUR is exposed

The performance of recent weeks would likely see a turnaround if there were to be a Russian invasion. We would most likely see EUR struggle, along with AUD and NZD.

The Eurozone is very close (in proximity) to Russia. It is tied economically too. Germany has high exposure in trade, especially in manufacturing goods export. There are also implications from gas supplies too. Furthermore, Russia’s forex reserves are almost a third in EUR. If Russia begins to sell its reserves then it is likely to be focused on EUR holdings. Recent EUR strength has been on the prediction that the ECB is less dovish. The historically cautious ECB may be threatened into further dovish leanings by the conflict.

The broad implication of an important war/conflict is risk negative. This would mean AUD and NZD may come under negative pressure, as the major currencies most considered to be pro-cyclical. They are also net importers of oil, so would also be impacted negatively by rising oil prices.

JPY and USD would perform well

We would expect the safe havens and net oil-exporting major currencies to perform well. USD to strengthen again (haven and strong oil industry) The Japanese yen is also a candidate for outperformance during times of uncertainty.

There would be a degree of support for CAD from the rising oil price. CAD has stalled in recent weeks as the oil price has just started to struggle for traction. If oil bursts above $100, then we would expect CAD to be a currency to outperform.

One currency cross to watch: EUR/JPY

With all this in mind, we believe that if Russia invades Ukraine there is one major cross that is likely to see traction. We see EUR/JPY moving lower. A test of 127/128 would likely be seen. This is the bottom of a 12-month trading range. Even without an actual invasion (and just the elevated potential for one, as we have now), there is downside potential for this move in the coming weeks.