Sentiment boosted in early 2023 but a rocky road lies ahead

Markets have been boosted by falling European gas prices and the prospect of China re-opening. However, it will not be plain sailing in the weeks ahead. 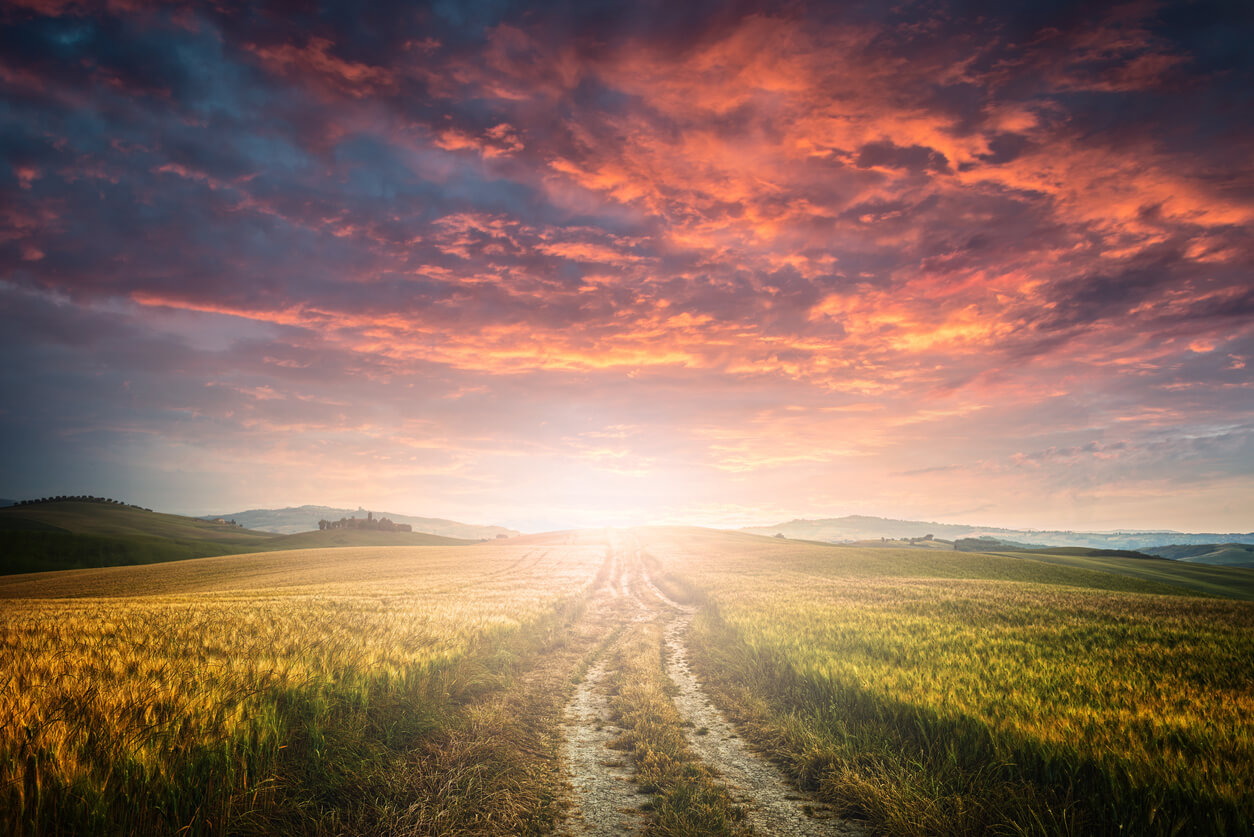 It is said that moves in the first week of the new year can be a gauge of how investors position for the months ahead. If that is the case, then the boost to sentiment early in 2023 is encouraging. However, the factors behind the moves are still highly uncertain and are likely to also be a driver of volatility and choppy markets in the weeks to come.

The equity markets in Europe have had a big jump in the early sessions of the year. One key factor behind this is the significant decline in European gas prices.

Prices had spiked higher in the summer as fears over President Putin and Russia cutting supplies into Europe impacted. However, European gas storage has been a success story of the early winter and with an extremely mild Christmas in Europe, gas prices have further plunged. This means has meant less need for expensive heating, alleviating pressures on consumers and government subsidies alike. 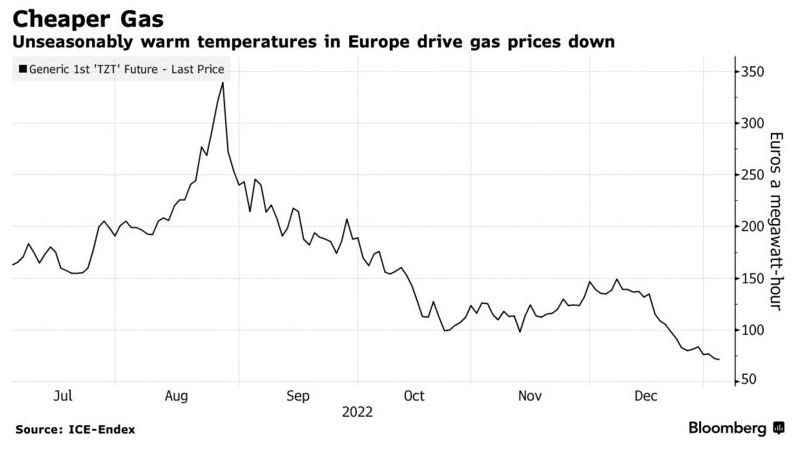 Energy prices have been a significant driver of inflation on both a headline basis and then the knock-on into the core basis. Lower inflation pressures ease the requirements of central banks to aggressively tighten monetary policy. 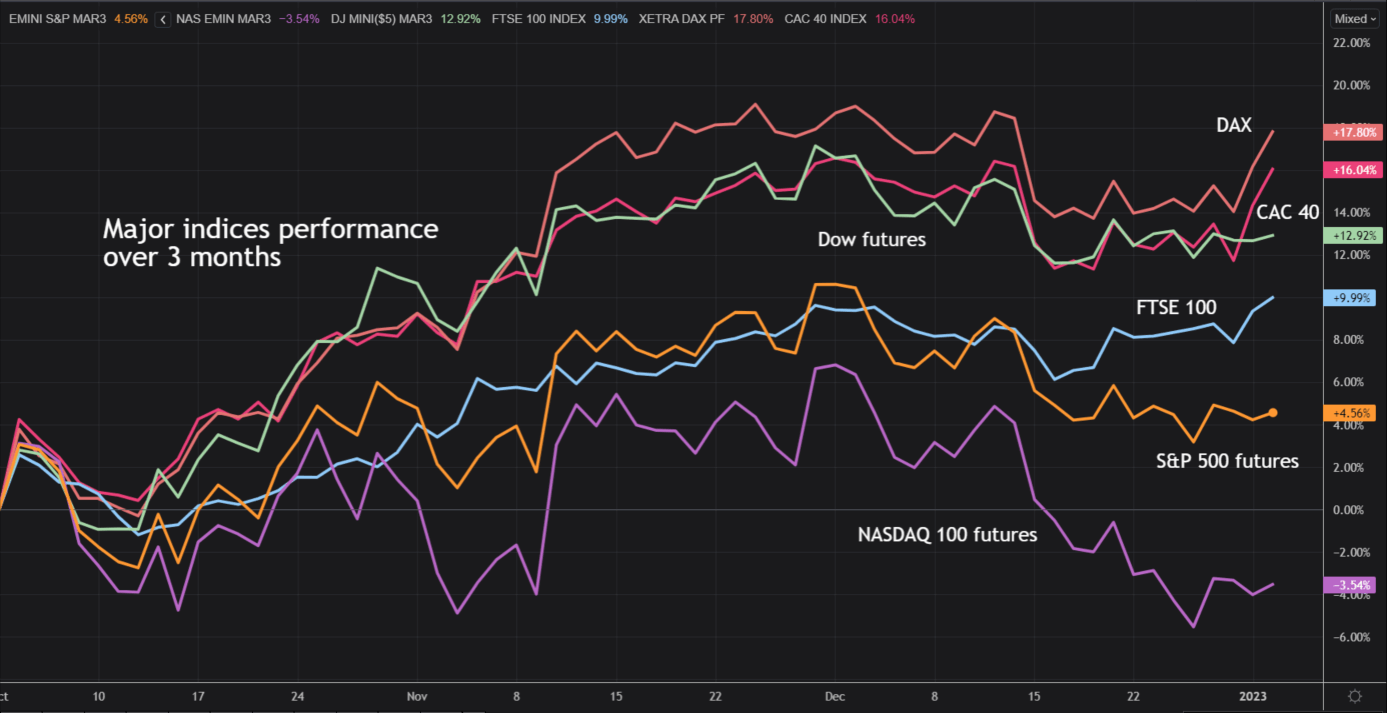 Traders have returned from their end-of-year holidays with a spring in their step. This has boosted the DAX, CAC and FTSE 100 performance.

China's re-opening will be a choppy but positive factor

In the final weeks of 2023, there was also a shift in thinking in China. The zero-COVID policy has dominated the outlook for the Chinese economy since the pandemic began. However, as China watched a World Cup free of restrictions, protests over domestic reaction to COVID infections took hold.

The result was that regional authorities have been easing social restrictions in China over recent weeks. Effectively “zero-COVID” has come to an end. The result means that supply chain restrictions should ease and this should be a significant boost to China’s growth prospects once more.

However, it will not be a smooth path. The coming months are likely to see a significant wave of COVID infections (and unfortunately, deaths) in China. This will likely mean a stuttering economic recovery. It could mean that financial markets overestimate the recovery prospects in the coming months. However, as the wave subsides, it is likely to leave markets with a risk-positive bias.

Inflation may be sticky, at least on a core basis

Headline inflation looks to be in decline. The chart we showed earlier on gas prices will have a direct impact on reducing inflation. However, core inflation could prove to be more sticky and much slower to reduce. This is likely to mean that central banks such as the European Central Bank remain hawkish for the next couple of meetings (at least until the next round of staff economic forecasts).

This could mean that there is a boost to sentiment in the weeks running up to the next round of meetings (the ECB next meets on 22nd February). However, the hawkish outlook from the ECB may jolt recovery prospects for traders bullish on higher-risk assets.

For the US, there is a feeling that the USD correction could be running out of steam. Since the December Fed meeting, the US 2-year yield has stopped falling. Traders underestimated how hawkish the Fed would be in December. This has put a floor under short-term yields (effectively interest rate expectations). 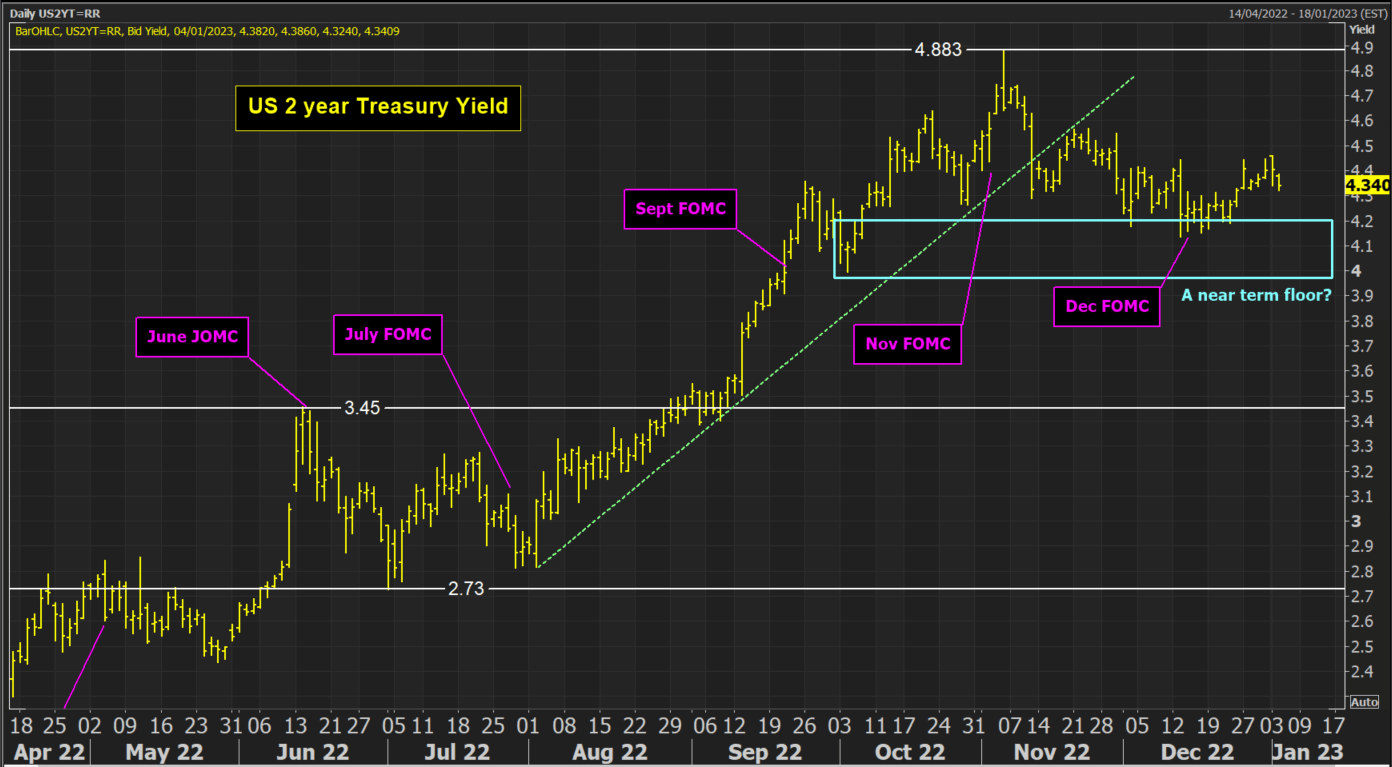 The selling pressure on the USD has not entirely gone, but it has eased. However, for the Dollar Index, there is a barrier to recovery between 104.50/105.80. It will be interesting to see how traders react around there now. 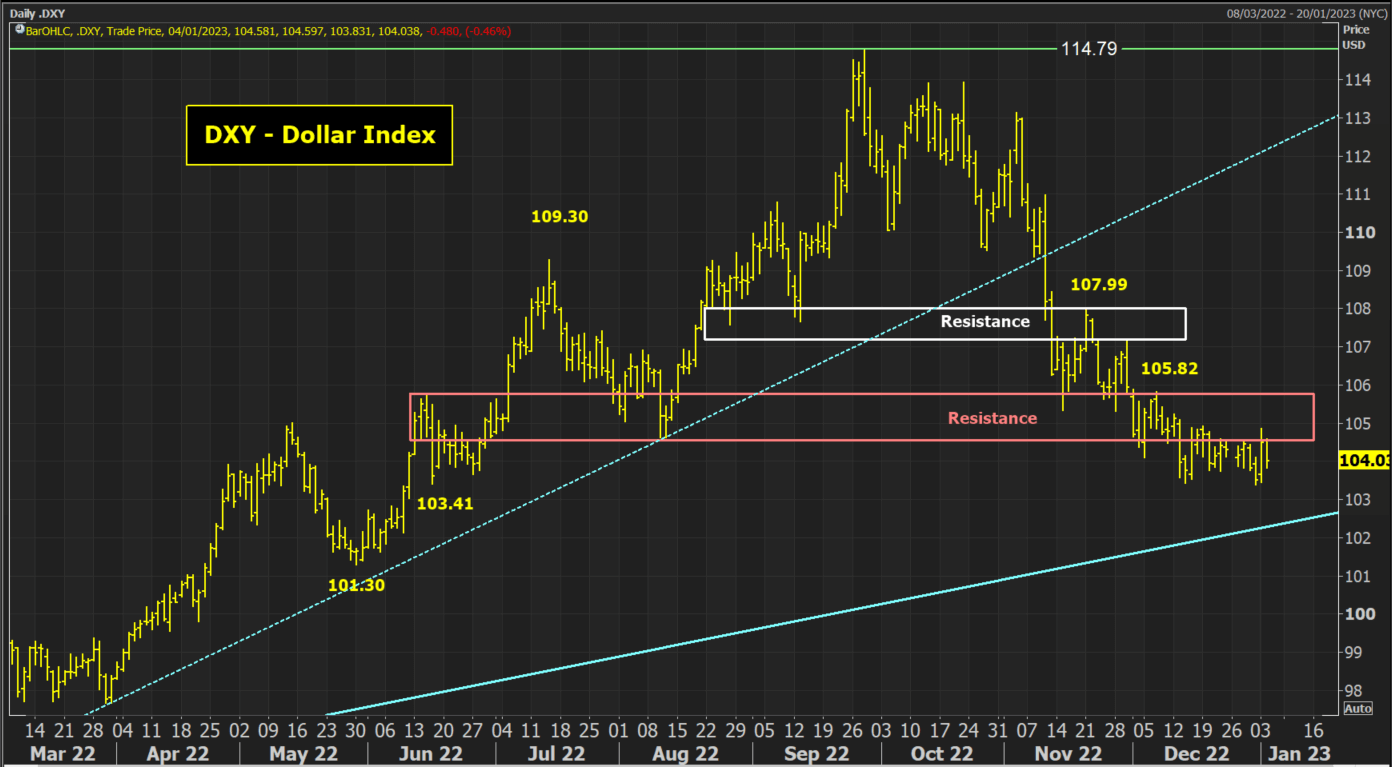 JPY is one to watch

The Japanese yen is one currency that we are now looking at as having the potential for being a key outperformer in the months ahead. After the Bank of Japan tweaked its yield curve control bands for the 10-year JGB (extending them to +/- 50 basis points around zero), the JPY has rallied strongly. There is a re-pricing for the JPY now underway on major forex.

The prospect is that the Bank of Japan could be moving towards even tightening interest rates in the months to come. This could drive huge moves on JPY crosses. 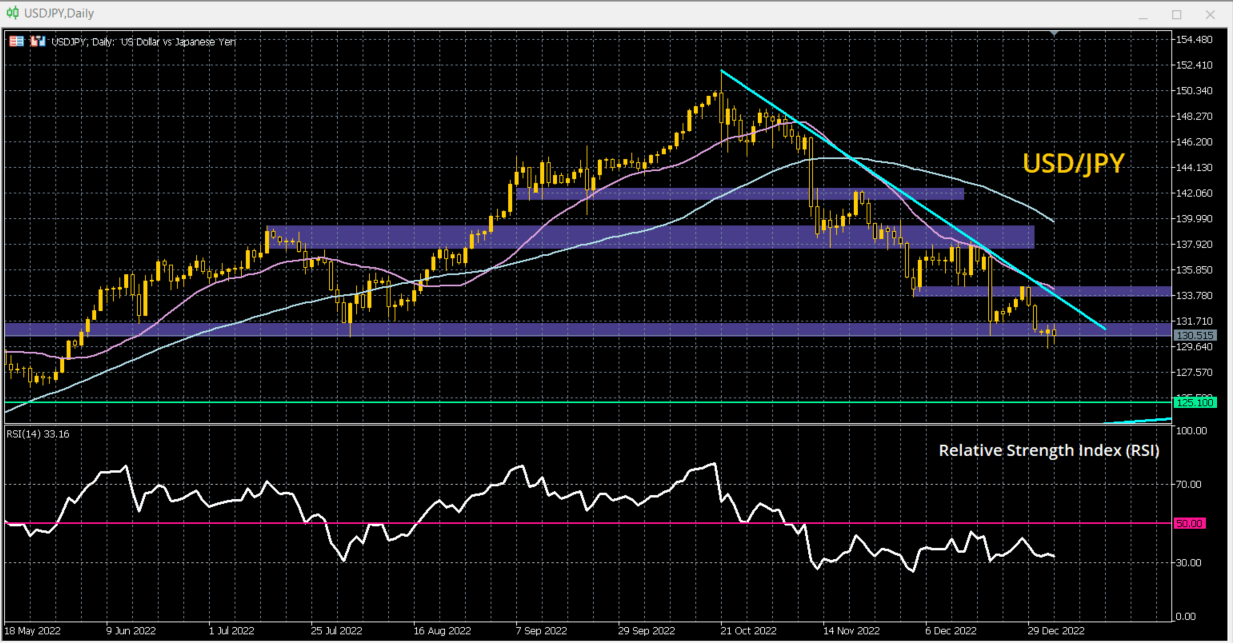