A report looking into the impact of the US Nonfarm Payrolls report on Fed monetary policy and the outlook for major forex. It seems that safe havens are set to struggle. 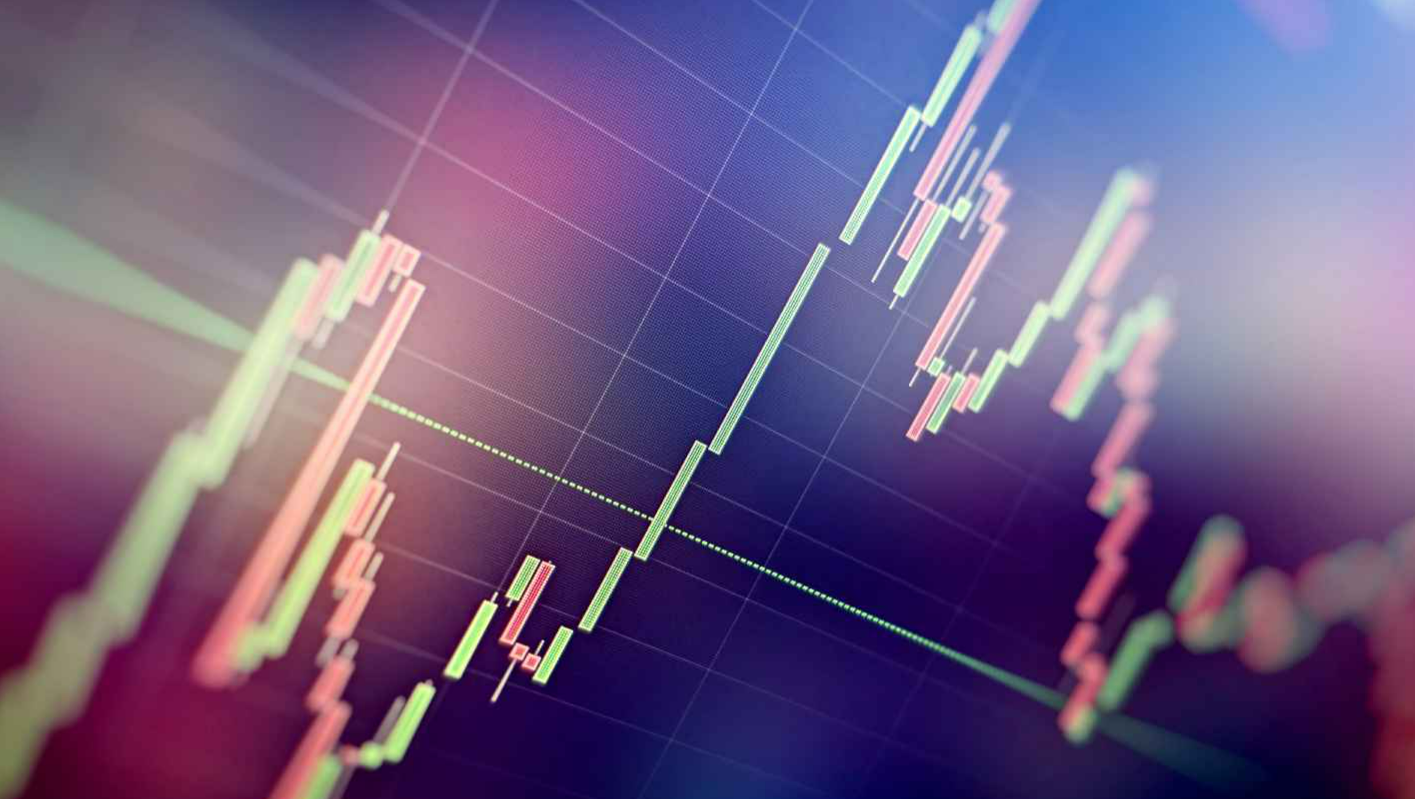 There has been a significant reaction across major forex in the wake of Friday’s Nonfarm Payrolls report. With the US labor market data coming in ahead of expectations across the board, markets have taken this as dollar positive but also risk positive too. This has implications for major forex.

The Fed is moving towards tightening

If there is another payrolls report in September that is anything close to the latest one, there will be a decisive push on the FOMC towards tapering asset purchases.

There were three Fed speakers yesterday who were hinting towards hawkish moves. It must be said that all three lean towards the hawkish end of the scale but only two are voters this year:

All three of these comments are broadly in line with our continued expectation that the Fed will announce in September that the taper will begin in December. This is just more confirmation that markets will now be preparing for a December taper, or perhaps even earlier if the data comes in hot.

USD and real yields are back in positive correlation

Throughout July there was an abnormal decoupling of the US dollar (USD) and real bond yields. On a real basis (accounting for inflation), with bond yields falling sharply but inflation holding up, this meant that in real terms, there was a sharp fall in US real yields.

Normally this would mean USD falling too (as the correlation is traditionally strongly positive). However, USD held up relatively well and with a spike higher in bond yields in the wake of the payrolls report, there has been a decisive re-alignment of the two. 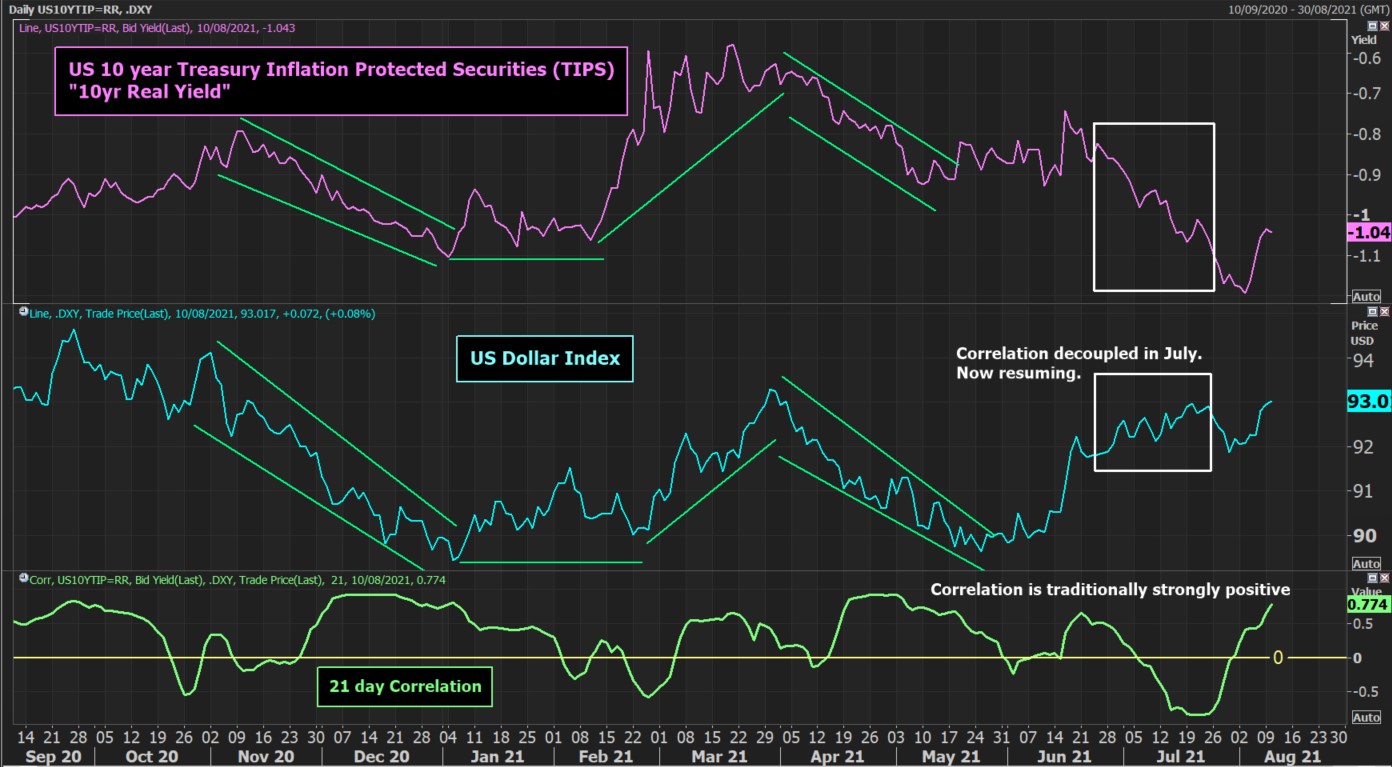 With the US dollar once more trading positively with yields moving higher, this suggests that the USD is no longer aligned with a safer haven trade. This is having a key impact across major forex.

We can see from the performance of major forex over the past week, the lower beta forex (safe havens such as Swiss franc, Japanese yen and also the euro) are at the bottom of the performance chart. These are the currencies that have central banks not expected to tighten monetary policy for several years or at least way beyond the Federal Reserve.

The commodity currencies such as the Canadian dollar, New Zealand dollar and also sterling, are holding up relatively well. Interestingly, these are all currencies with central banks that are on a similar timeline or sooner than the Fed.

This would suggest that if bond yields continue to rise, or at least hold up now, the lower risk, safe-haven currencies will be underperforming.

Looking at the charts, we can see JPY under pressure. USD/JPY is continuing to rally today and a closing move above 110.70 would be a key breakout that would re-open 111.65 once more. We are already seeing momentum leading the price higher, with the RSI at a near 5 week high. 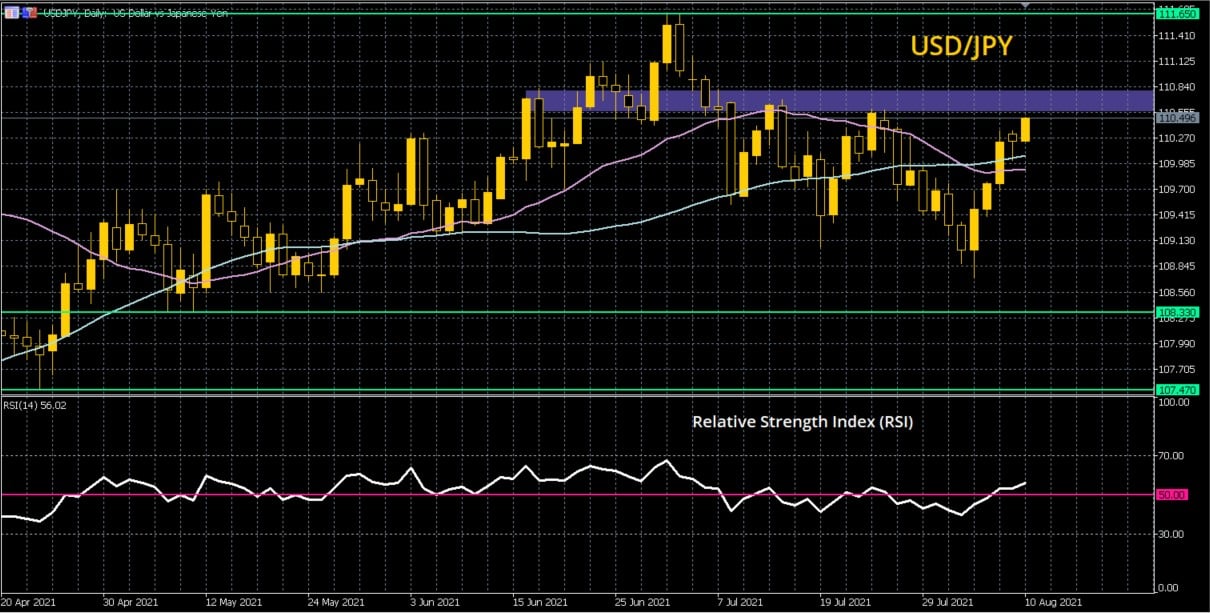 Another interesting way of playing this underperformance of JPY could be through the GBP/JPY cross. The technical outlook looks primed for a test of resistance at 153.50. A closing breakout above 153.50 completes a “head & shoulders reversal” and would imply a further recovery towards 155.50/156.00 (confirmation of the move would come on a break above 154.10 resistance). Already we see RSI momentum leading the market higher. A move on RSI above 60 would confirm a renewed bullish configuration. 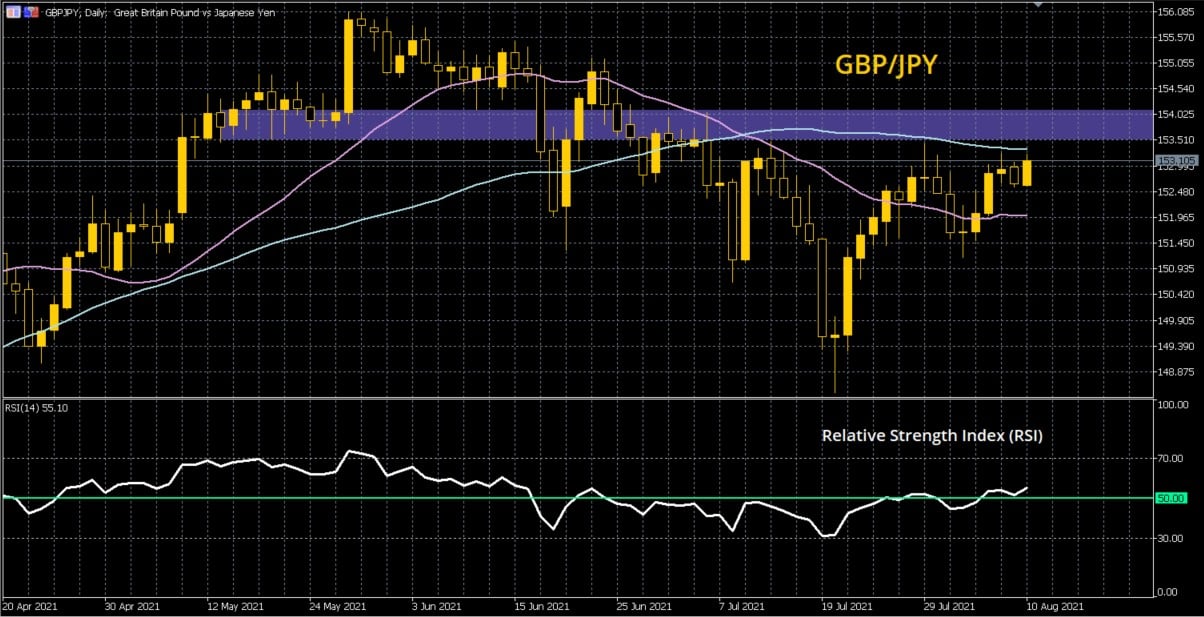 Since Friday’s Nonfarm Payrolls report, there has been a decisive switch out of safe-haven forex into higher risk. The improving outlook for Fed tightening monetary policy plays into this and is also helping the US dollar too.