Oil rally shows signs of faltering, but no top pattern yet

The technical analysis of oil shows that the sharp rally is beginning to falter. This may turn corrective if OPEC+ increases oil production at this week’s meeting.

The huge rally in the price of oil throughout 2021 has had a significant on global markets and economies. Starting the year at $52, Brent Crude Oil has burst higher by over 60%. The latest bull leg higher has added around $20 in just over two months. However, could the run be coming to an end? There are signs in the past week that the price could be peaking. The OPEC+ meeting on Thursday could be crucial.

The US is looking for increased oil production

Oil consuming countries are desperate for oil production to be increased, to moderate the huge oil price increases that have been a feature of 2021. Higher prices have driven inflationary pressures in recent months.

The perception is that the recovery in oil demand has outstripped the increase in supply. Add in the supply bottlenecks in energy markets and this has added up to sharp price rises which will be hurting consumers around the world.

In a speech at the G20 meeting last weekend, US President Biden was calling upon OPEC+ to increase production. He repeated these calls yesterday at the COP26 climate summit. He suggested that the steep rises in oil and gas prices were due to the reluctance of OPEC to increase oil production. This was added to by the US State Department also calling for production increases to stabilise energy markets.

OPEC+ (OPEC plus other major exporting countries such as Russia & Kazakhstan) hold a meeting on Thursday to decide on their latest production increases for December. The expectation is that OPEC+ will remain steady with increasing at an average per month rate of 400,000 barrels per day.

However, OPEC+ has already been fairly slow to increase production. Some of it is not deliberate either. The grouping is already struggling to meet the existing 400,000 barrels increase per month.

According to Reuters, the 10 OPEC countries fell short of their permitted increase of 254,000 in October, with a rise of just 190,000 barrels. Involuntary outages in some producers were the reason for the shortfall.

Given the inability of hitting the increases, in addition to the uncertainty in demand due to COVID-19, it is unlikely that OPEC+ would be ready to commit to more production increases. The risk would be overshooting on supply in the face of renewed demand shortage, causing a sharp move lower on the oil price.

There is an uncertainty coming into the meeting, not least of all following comments out of the US this week. However, Kuwait and Iraq (big voices within OPEC) have said in recent days that they are backing the existing levels of 400,000.

Technicals show a stalling rally but no reversal yet

Looking at the technical analysis of Brent Crude oil (MT5 code: UKOUSD) we see that the sharp rally of the past ten weeks has just tailed off recently. This has come as the market has:

There is the suggestion that Brent Crude is now trading in a four-week range between $82.40/$86.65. Whilst the RSI remains above 50 the outlook is still broadly positive. Also whilst $82.70 support is intact, the market is simply in a near to medium-term consolidation. 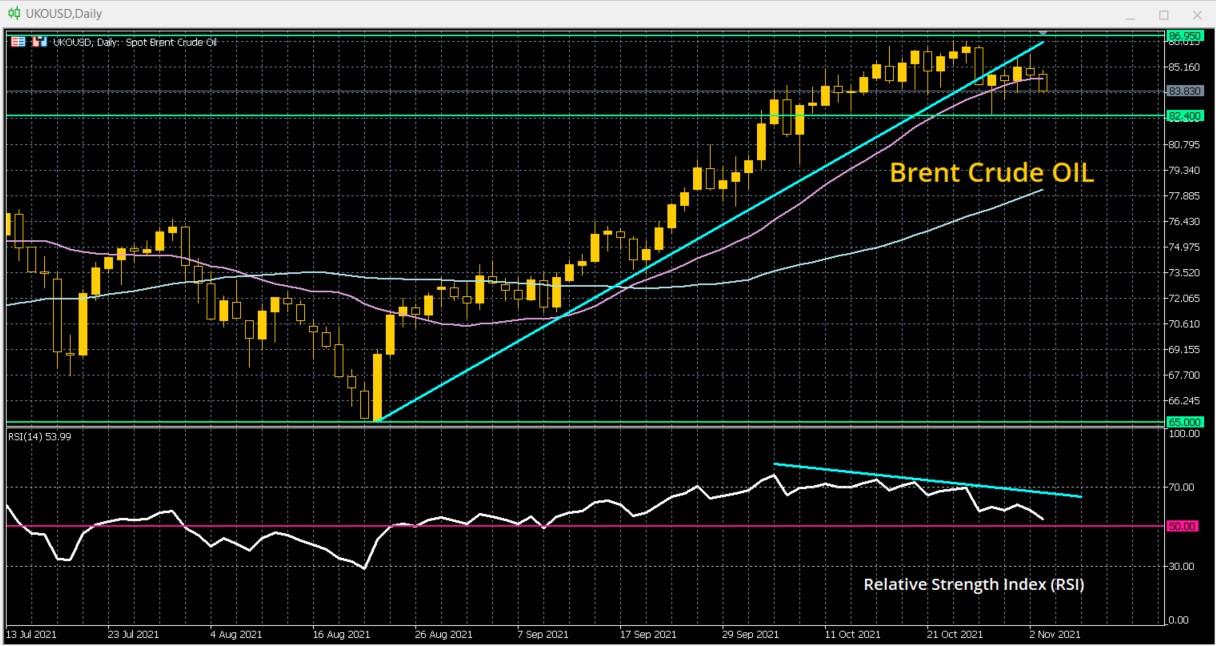 However, the support at $82.40 is key and with the market turning lower from a high of $85.90 yesterday, the potential for a top pattern forming is now growing. A close below $82.40 would complete the pattern which would imply a corrective move of around -$4 in the coming weeks.

We do not expect OPEC+ to do much this week, and this may continue the recent consolidation. However, any signs of increasing production would begin to weigh on oil and could complete the top pattern on the charts.