Market reaction to US CPI suggests inflation may be peaking

Despite US inflation soaring to a four-decade high of 7% yesterday, bond yields and the US dollar fell. This suggests that markets are looking increasingly towards a peak of inflation. 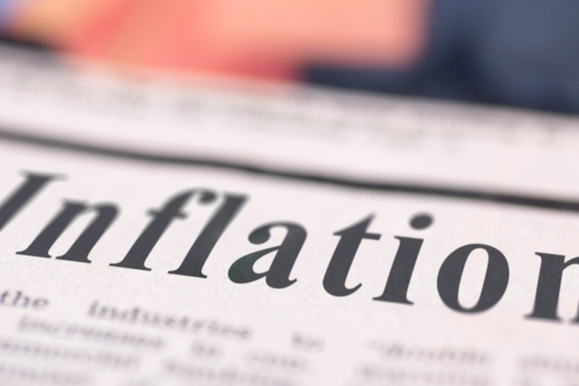 In December, US inflation increased to 7% on the headline CPI basis. This is the highest level since 1982. Core inflation has increased to 5.5%, also the highest since 1982. The data was broadly in line with the consensus estimates. However, it seemed as though there was a collective sigh of relief that the rise was not even greater. The market reaction suggests participants were positioned for higher levels.

Longer-dated US Treasury yields (such as the 10 year) fell on the inflation announcement. Although this decline was subsequently retracted into the close, yields remain subdued. Conventionally, we would expect a sharp rise in bond yields on this record level of CPI inflation.

However, it was interesting to hear that a bond auction of 10 year Treasuries fetched better than expected average demand. There is an appetite to buy US bonds despite this rise in inflation.

We also saw little movement on the US 10 year Breakeven Inflation rate (a market that measures average inflation expectations over the next 10 years). 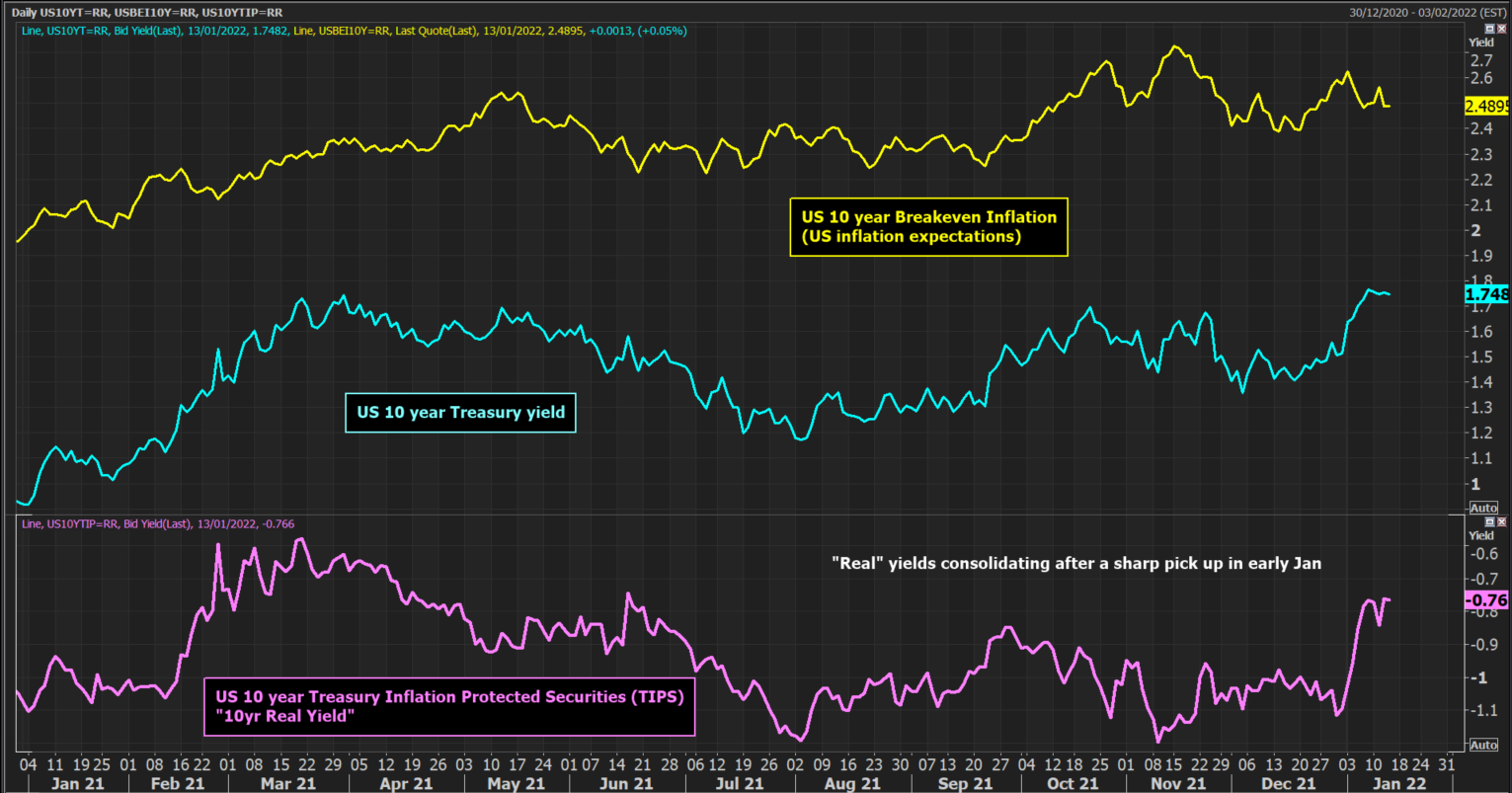 Market participants not rushing to sell bonds (and a higher than expected demand at auction) suggests that there is a feeling that inflation could now be peaking.

ISM prices paid are falling over

The recent ISM data showed a sharp reduction in the prices paid component of the manufacturing sector. The services sector is also no longer rising.

Today’s Producer Prices Index (PPI, or in other words factory-gate inflation) will certainly be watched now. There was a notable sharp reduction in Chinese PPI this week (also on the CPI too). US PPI is expected to tick slightly higher today, but traders will be watching for any negative surprises.

Watching for the Michigan Sentiment inflation expectations on Friday

Friday’s prelim Michigan Sentiment data will also include the latest reading on consumer inflation expectations. They currently sit around 3% for the next 5 to 10 years. The level has hovered between 2.8% to 3.1% since mid-2021.

This will be another gauge of inflation to watch. It is slightly higher than the US 10 year Breakeven rate (which is around 2.5%) that we showed earlier. Breakeven inflation has also been broadly stable since mid-2021. If the Michigan rate continues to remain sticky around 3% then it will be another indication that inflation is probably peaking. 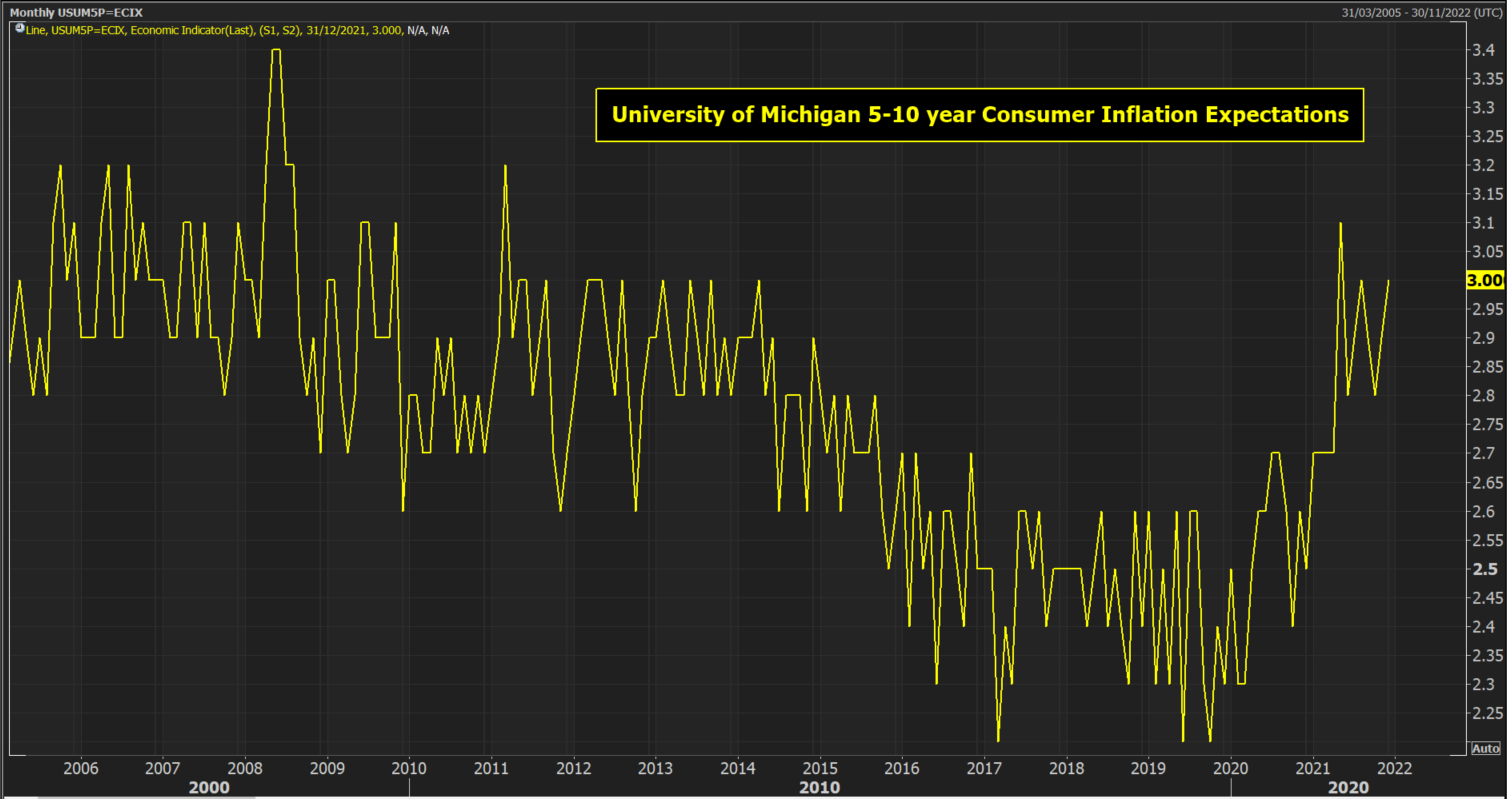 The market impact of this could all be adding up to the end of the US dollar bull run. The dollar did not rally because the market is just about as far as it can be with the Federal Reserve pricing for tighter rates in 2022. Currently, around 3.7 rate hikes of 25 basis points are priced on interest rate futures markets for the rest of this year.

The rocket fuel needed for further USD strength is running low. With a flattening of the yield curve (the spread between 2 year and 10 year being a prime example) the inference is that Fed rate hikes will weigh on longer-dated yields. This will hamper USD strength. 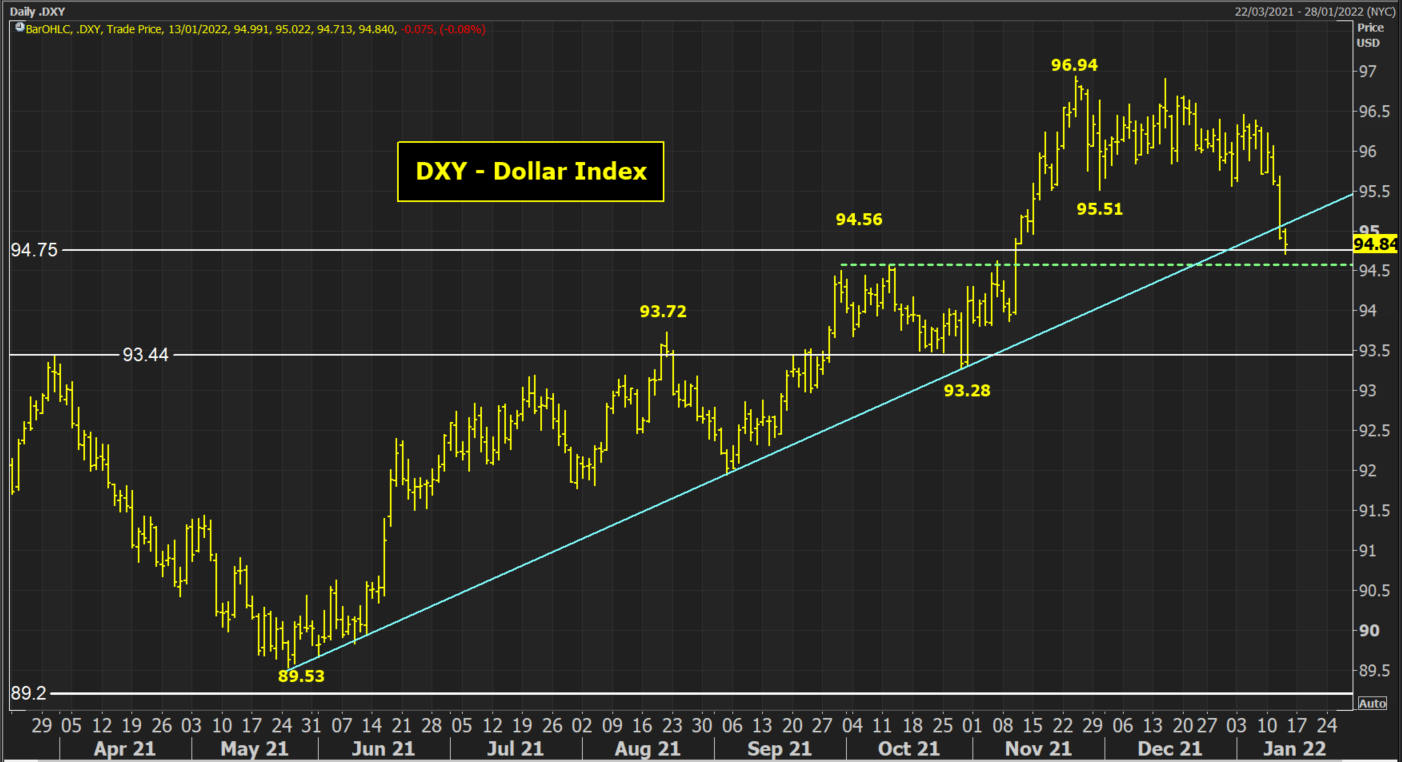 We are already seeing it on USD pairs, with a sharp move higher on EUR/USD and GBP/USD. The Dollar Index fell decisively yesterday and has now broken its key 7-month uptrend.

The other interesting development of this is that if inflation is peaking then this also hampers upside potential on gold. This would play into what we see as a choppy period of trading in the weeks ahead for gold.