Major forex is at an important juncture ahead of the FOMC

As the USD has reacted positively to better-than-expected US data in recent sessions, major forex pairs have unwound. Markets stand at a crucial level ahead of next week’s FOMC meeting.

The USD correction since October/November has been decisive. The move certainly looks to have left a key high on the Dollar Index, which could also turn out to be a long-term high. This has come as markets have increased positioned for a “Fed pivot” away from its aggressive monetary policy tightening. However, these are invariably not straight-line moves. There have been signs in the data in recent days that there could be room for a USD rebound. This could also have implications for the FOMC meeting next week. Subsequently, major forex pairs could be set for an important phase. US CPI inflation next week could be pivotal.

US data has picked up

Friday’s Nonfarm Payrolls came in at 263,000 which was well ahead of the expected drop to 200,000. Wage growth also picked up unexpectedly. There was also a much better-than-expected print in the ISM Services PMI, which showed good expansion at 56.5. As part of the ISM data the Employment component also held up strongly. This suggests that the US labour market remains tight, and is a driver of stronger wages.

There has been a reaction on the bond markets, with yields moving higher. US Fed Funds futures have once more priced for the terminal rate to be around 5% (there had previously been a drop to around 4.9%).

It seems that around the 5% area is a settling point. This is an area that several Fed speakers have spoken about in recent months.

The big question is what happens with the US CPI on Tuesday (the day before the FOMC announcement). Inflation fell last month and there was a big reaction on major markets, pricing for a less aggressive Fed. However, if inflation surprises to the upside next week, this would set up for the Fed to sustain a hawkish monetary policy outlook at there would likely be a big kickback on markets. We would likely see a USD rebound and a correction lower on commodities (such as precious metals) and equity markets.

Forex majors are around key levels

The big rebound on pairs such as EUR/USD and GBP/USD, along with sharp declines on the likes of USD/JPY is now being called into question as the USD has picked up early this week. The next key data is the Michigan Sentiment on Friday, but all eyes will be on that US CPI data on 13th December.

Looking at the technical analysis, major forex pairs have moved to test crucial levels. On EUR/USD there has been a huge recovery since the end of September. Despite yesterday’s move lower, the recovery is still the dominant trend on a medium-term basis. However, looking longer term, there is the big 18-month primary downtrend that is still intact.

As the market fluctuates, there could be a consolidation that forms. For now, the recovery is still intact, with the latest break above 1.0495 resistance opening the upside. Another higher low above the 1.0290 reaction low would be a good chance to buy. Reaction to the US CPI could be key as to whether the primary downtrend can be broken and the market can move towards a test of the next resistance of the May high at 1.0785. 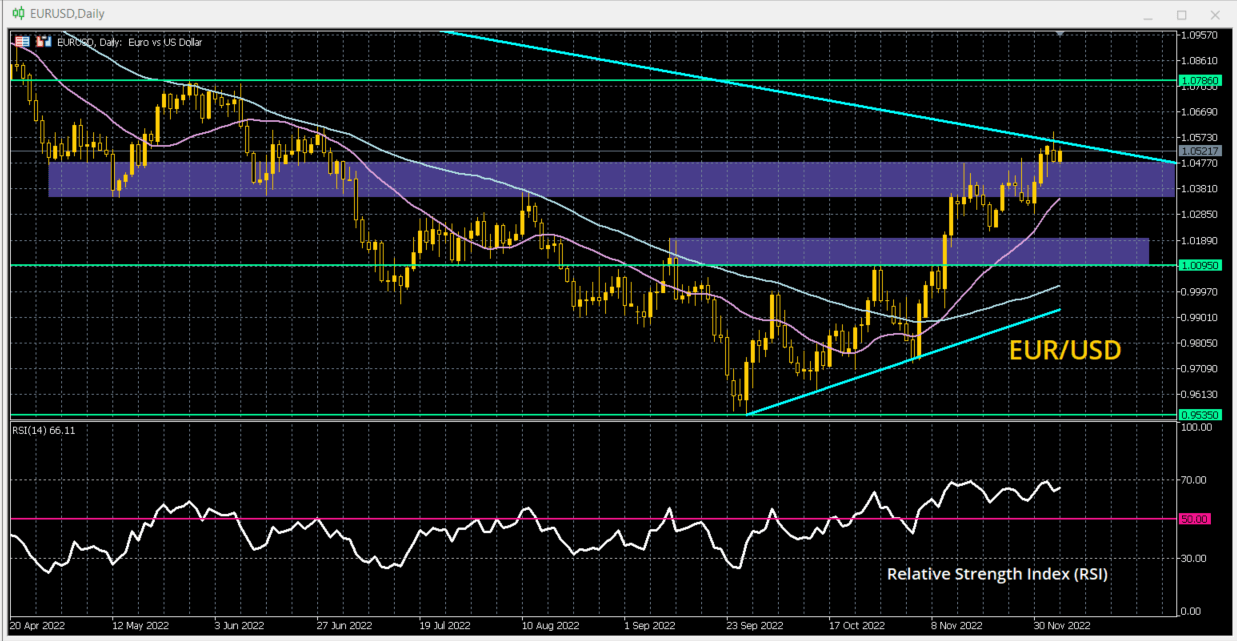 GBPUSD also looks to be around a crucial level, with the resistance around 1.2295/1.2400 yet to be broken. This key resistance is still under threat with a one-month uptrend still a dominant guide for support. However, the bulls will certainly be keeping an eye on the higher low at 1.1900 if there is a corrective slip in the days ahead. Losing that support (on higher inflation) and the recovery on Cable is significantly questioned. 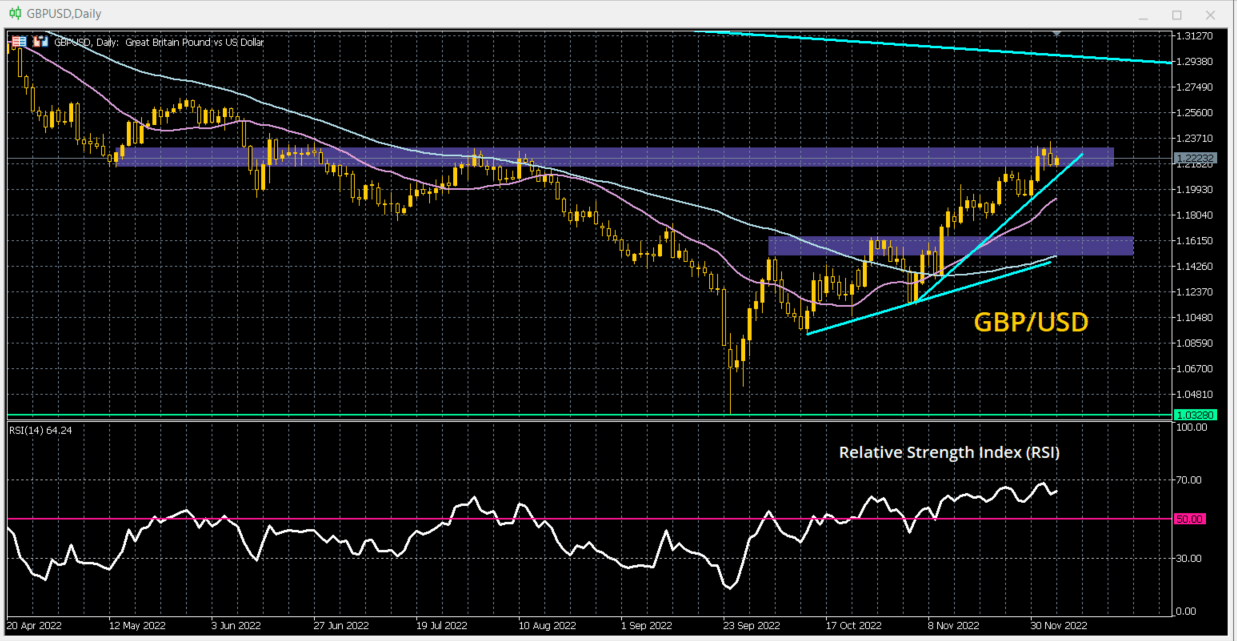 Finally, looking at the USD/JPY there is a key market to watch, at least for movements in bond yields. There is still a significant positive correlation between US bond yields and USD/JPY. So when yields picked up yesterday, there was a jump in USD/JPY.

On the technicals, we see a big resistance that comes in between 137.65/139.40. As the market has rebounded within the six-week downtrend, this looks to be a chance to sell. This resistance is a key medium-term pivot band. Using near-term bull failures as a chance to sell has been a feature of the trend lower. Subsequently, reaction around this area now could be crucial for the medium-term outlook. For now, we still favour selling into strength, but this could change if US CPI comes in hot next week. 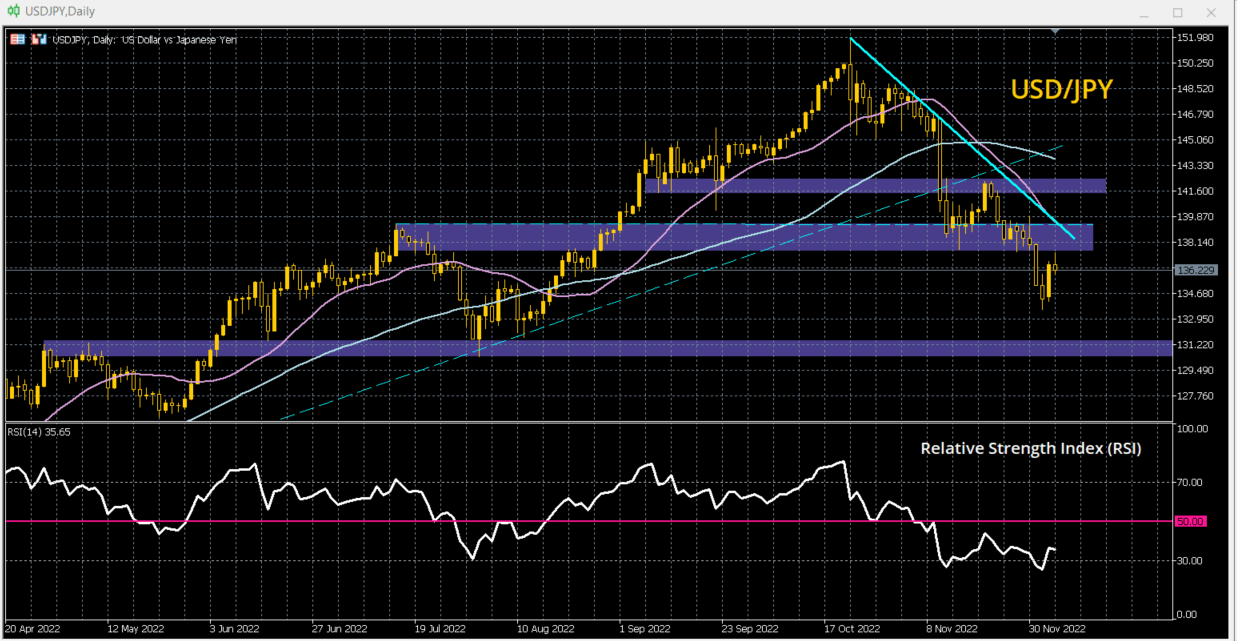