How Do I Explain Stock Shares to My Children?

The stock market is one of the oldest trades in the world, believed to have originated well before Columbus dreamed of touching the American continent. 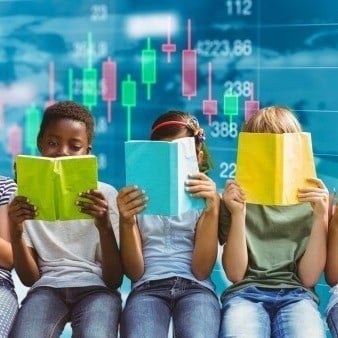 The stock market is one of the oldest trades in the world, believed to have originated well before Columbus dreamed of touching the American continent. It remains a very profitable industry for those who understand it and are capable of performing well in it.

Given recent circumstances and going through a global pandemic due to Covid-19, many adults are concerned about the future of financial markets and where to invest their money. It’s natural to be worried about your children’s future but whilst you can’t control the future, something you can do is keep your children clued up about the current markets, which they’ll thank you for later.

We have written a simple guide for understanding trading from a child’s perspective, even if it requires using apples and toys as examples.

Trading stocks tends to follow the same principle as every other form of trading: speculation. Speculation means buying something expecting that it will cost more in the future, when you sell it.

For children learning to trade, that means that you look to buy a toy car at $4 so you can sell it later for $5 or more, receiving a good profit.

The overall concept of trading refers to the constant exchange of goods and products, and speculation was born almost simultaneously, when people realised the changing nature of the market and its prices.

Stocks possess some unique features that make their market special, so trading children will need to understand a bit more about stocks themselves than simply general trading. For starters, we have that stocks are not assets or products. They are also called “shares” because you are purchasing part of the company.

This is a great way to discuss the concept of sharing a toy with a friend that they trust and having part ownership of the toy. As long as the toy is kept safe it benefits those who can play with the toy.

Companies acquire capital from their initial offerings—that is, when they sell their first shares. Furthermore, they can also sell additional shares down the line if they need financing for extra projects. Train toys or lego with detachable pieces are great ways to visually explain this. On the other hand, investors benefit from their purchased shares in the form of dividends; investors are entitled to a portion of a company’s income due to them owning part of it. That feature is what makes stocks desirable above mere speculation.

For children learning to trade, it would be the same as if you helped your friend purchase a pencil. If you gave him some money so he could get a pencil, then he would let you look at his annotations.

Another example would be that if you help someone sell lemonades— you gave him cash for buying lemons—then he must give you part of the money he makes selling it. Since stocks can give good revenue, other people will want to buy it; this is when you can profit from speculation.

Being good trading children simply means knowing what people want. You can have a discussion with them about popular culture, discuss industries such as sports and entertainment and the amount of people who are consumers of that industry. By looking at crowds of people at a concert or football stadium will help them picture what popularity and interest is, and how that can benefit companies.