Looking at the Fed meeting on balance, there has been a relief rally that the FOMC was not more hawkish than it was. This is driving an improvement in risk positive assets. 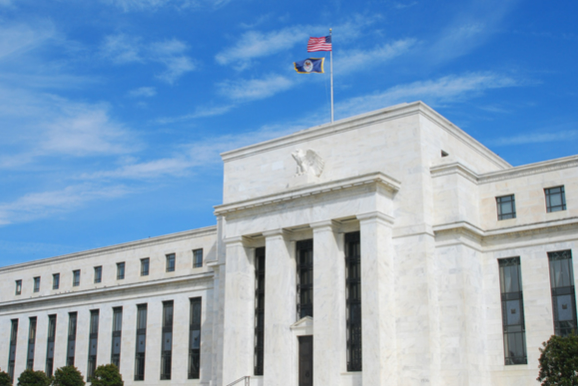 In a move that was anticipated by markets, the Federal Reserve has moved further down the road of tightening monetary policy. It has accelerated the tapering of asset purchases and signaled its intent for increasing interest rates several times next year. Market reaction was initially as one might expect: Treasury yields higher and US Dollar (USD) strengthening. However, this move has since reversed as a bias of positive risk appetite has taken hold.

In his recent congressional testimony, Fed Chair Powell talked of “retiring” the term “transitional” when it came to the elevated levels of inflation. It would appear that the Fed is conceding now that inflation will remain hotter than they had previously hoped/expected. Looking at a section from the FOMC statement, inflation is no longer considered “transitory”, it is now just “elevated”.

Hence why the Fed has now seen the need to accelerate in its tightening.

The Fed has also increased its monthly taper to -$30bn per month (from -$15bn previously). This means -$20bn per month of Treasuries and -$10bn per month of mortgage-backed securities. In January the QE will be $60bn per month, meaning $30bn in February and zero in March.

This is key because it leaves the March meeting live for a potential increase in interest rates (although this is not expected, see below). The Fed and Powell will not raise rates whilst still engaging asset purchases each month.

The dot plot projections show where each FOMC member sees the Fed Funds interest rate in the coming years. The projections have shifted up significantly for 2022 from the previous September submissions.

The median of the FOMC sees rates finishing 2022 with three +25 basis points increases from current levels of a range of 0.0%/0.25%. Interestingly, every FOMC member sees rates higher next year, with another three in 2023.

However, one of the most interesting suggestions from this is that although the rate hikes are being brought forward in the coming years, the “terminal rate” (where members see rates finishing) remains the same at 2.50%. The Fed may not be that more hawkish, it just needs to react quickly to fight inflation.

The terminal rate still at 2.50% is interesting, because markets still do not tend to believe this. The whole of the Eurodollar interest rate futures curve suggests a terminal rate of 1.75%. Furthermore, interest rate futures moves are pricing for the first-rate hike in June. This is more dovish than it might have been coming out of the FOMC meeting.

Plus market reaction on bond markets has not seen a spike higher. Treasury yields are back around levels before the announcement today. This suggests the market views the Fed tightening monetary policy will impact negatively on the economy.

Turning to the economic projections, there were mild upside tweaks to growth and inflation projections for 2022, whilst unemployment was revised lower. However, there is also a feeling that GDP will be lower than previously thought for 2023. This hints that the Fed is not quite as hawkish, or confident as perhaps it might have been.

This caution was also hinted at in Fed Chair Powell’s press conference. Powell said a couple of things that have just allowed risk appetite to take off again:

All in all, the meeting was a mix. A hawkish steer from the statement (which was broadly expected), but a more cautious Fed chair Powell’'s press conference. Markets have taken a view on the more cautious demeanour of Jerome Powell.

Market reaction has completely flipped around from where it was in the early minutes following the statement. Traders have taken it very much that risk appetite is now firmly positive. The question, is how far this will last? We see this as a near term move that may last in the run-up to Christmas. However, the Fed is decisively on its way to tightening, and this will be a key factor in 2022.

The Fed meeting out of the way means that unless there are any significant hawkish curveballs from the ECB today, this is a major risk event cleared out of the way. This now sets up for a run higher in risk assets.

On forex, the Australian dollar has broken to three-week highs on AUD/USD and is looking strong for further gains. Furthermore, on commodities, Brent Crude oil (MT5 code: UKOUSD) is building higher once more, and we are looking for a pull above $76.80/$77.20 resistance to open upside.

As for the USD, there may be a near-term reaction lower, especially against the higher beta currencies. However, we are still looking for further USD strengthening in 2022 as the dollar gains from the Fed move along its tightening cycle.