Despite the Fed confirming a 75bps rate hike, the USD has weakened. Viewed as a dovish hike there has been a sigh of relief for broad market sentiment, fuelling gains for risk assets. US Advance GDP will now be eyed as the next risk event. 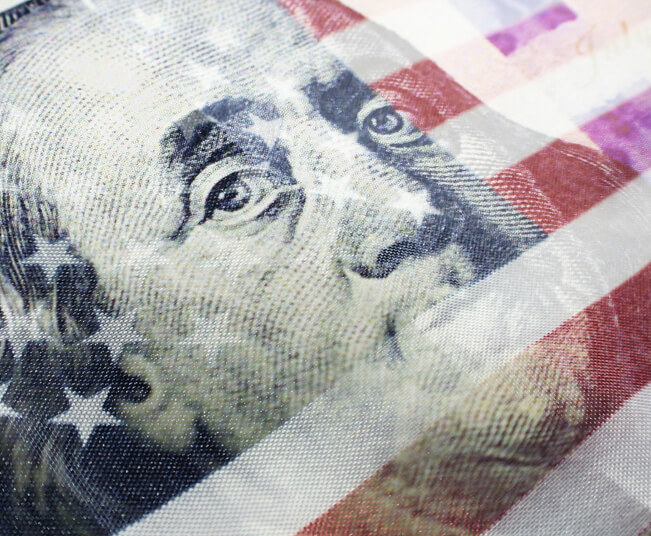 The US Federal Reserve increased the Fed Funds rate (its interest rate) by 75 basis points (+0.75%) last night. However, the market was fully expecting the move (and some had been thinking there was an outside chance of a 100bps hike). Add in a more cautious demeanour to Fed Chair Powell (the Fed will now be more data-dependent and decide on a meeting-by-meeting basis). Subsequently, there was a risk positive and USD negative reaction across major markets. This reaction has largely held into this morning, although as the European session has taken hold, the risk positive bias is being questioned.

Traders will now look towards US growth data later today and the reaction to any surprises will be an interesting gauge moving forward. Previously, we have seen negative surprises being USD positive. However, this may begin to change if markets believe that the Fed is sensitive to recession risks.

There is a batch of Eurozone and US data on the economic calendar for traders to digest. A clutch of Eurozone sentiment gauges for Economic Sentiment, Industrial Sentiment and Services Sentiment are all expected to show continued deterioration and will impact EUR positions. Prelim German inflation is expected to stabilise. The big event on the calendar is US Q2 Advance GDP. A first look at US growth in Q2 is expected to show only marginal growth at +0.5%. However, this is annualised so could easily slip into negative with a downward surprise. There is subsequently a risk of the US slipping into a technical recession. Weekly Jobless Claims are expected to continue to worsen, adding to the feeling that the labour market is increasingly feeling a squeeze.

Market sentiment is turning into a more mixed outlook: A weaker USD has been the bias overnight, but there are some initial signs of this move stalling. Positive risk appetite has become more of a consolidation.

Treasury yields have picked up: After falling on the back of the Fed decision, yields have rebounded this morning. The 10-year yield is +8bps higher from last night’s close. This is helping to restrict USD selling this morning.

A dovish Fed hike: An increase of +75bps to bring the Fed Funds range up to 2.25%/2.50% (from 1.50%/1.75%). This is around where many believe the “neutral rate” is. Powell said that the FOMC wanted to be “moderately restrictive” on rates, apparently between 3.0% and 3.5%. Powell said that further rate hikes will be necessary but will be data-dependent and decisions will be made on a meeting-by-meeting basis.

Weak US tech earnings: The earnings continue to miss estimates. Meta (Facebook) shares fell by almost -5% after-hours after earnings, revenue and ad revenue all disappointed. This is weighing on NASDAQ today.

Australian inflation mixed: Headline inflation for Q2 increased to 6.1% but this was below the expectation of 6.2%. Trimmed mean inflation (core) was higher than expected at 4.9% (4.7% exp).

Cryptocurrencies holding higher after rebound: Coins rebounded strongly in the wake of the FOMC decision and are holding on to these gains today. Bitcoin rallied over +8% yesterday and is another +0.5% this morning, close to $23,000.

Broad outlook: Sentiment is yet to settle following the Fed, with the USD still unable to claw back losses. The risk rebound is looking a little questionable. Reaction to US GDP will be the next gauge for market sentiment.

Forex: USD fell on the Fed decision and has yet to claw back any meaningful ground. JPY is the big outperformer.