The USD strength has been the major play of the week, with significant levels now being broken on forex pairs. Commodities are also impacted, whilst indices are threatening corrective moves. 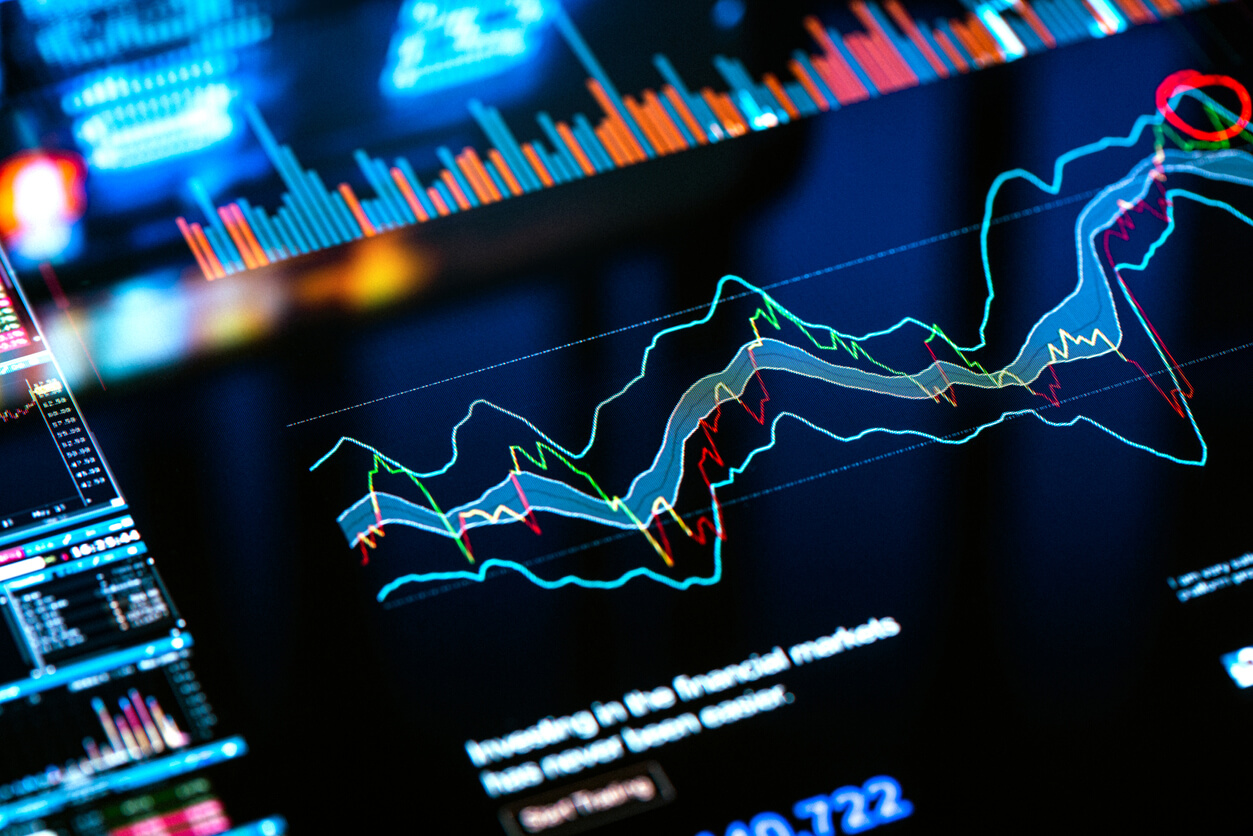 There has been a decisive shift in market outlook that has been building over recent days. The USD has been gaining strength once more. However, it has now decisively broken higher and is looking to drive forward now. This USD strengthening is weighing on major forex pairs such as EUR/USD and GBP/USD which have broken key levels of support. Higher US Treasury yields are certainly playing a role, helping to drive USD/JPY higher, despite Japanese inflation rising to seven-year highs overnight.

The perception of the market is that the US is best placed to weather the economic storms of high inflation and the threat of recession. Hawkish Fed members continue to argue the case for the FOMC to stand strong in the fight against inflation. This is helping to bolster the outlook for a stronger USD.

It is relatively quiet on the economic calendar for the rest of the day. There is just Canadian Retail Sales to watch for. Sales growth is expected to be more subdued at +0.3% in June but this was after a big jump of +2.2% in May. Despite this, 12-month sales would remain strong at around +9%.

Market sentiment favours a stronger USD: USD gains are a key driver through major forex and corrective pressure on commodities. There is also a slightly corrective bias that is drifting into equities too.

Treasury yields move higher: This is especially the case with the US 10yr yield which at 2.93% is at its highest since 21st July.

Japanese inflation rises to a seven-year high: Core inflation has increased to 2.4% in July (from 2.2% in June). This was in line with expectations but is the highest since 2015.

Fed hawks continue to come: Bullard (2022 voter, extremely hawkish) favours a 75bps hike in September. George (2022 voter, leans hawkish) believes that the market is getting it wrong in thinking that the Fed would slow down. Kashkari (2023 voter, now centrist) believes there is more work to be done on inflation and economic fundamentals are strong.

Cryptocurrencies falling sharply today: Cryptocurrencies have been drifting lower throughout the week, but this move has accelerated this morning. Bitcoin has fallen over -6% today and is trading at around three-week lows, back under $22000.

Broad outlook: A USD positive and mild risk-negative bias has been in place throughout the week.

Forex: USD is outperforming major forex again, with the NZD once more the underperformer. 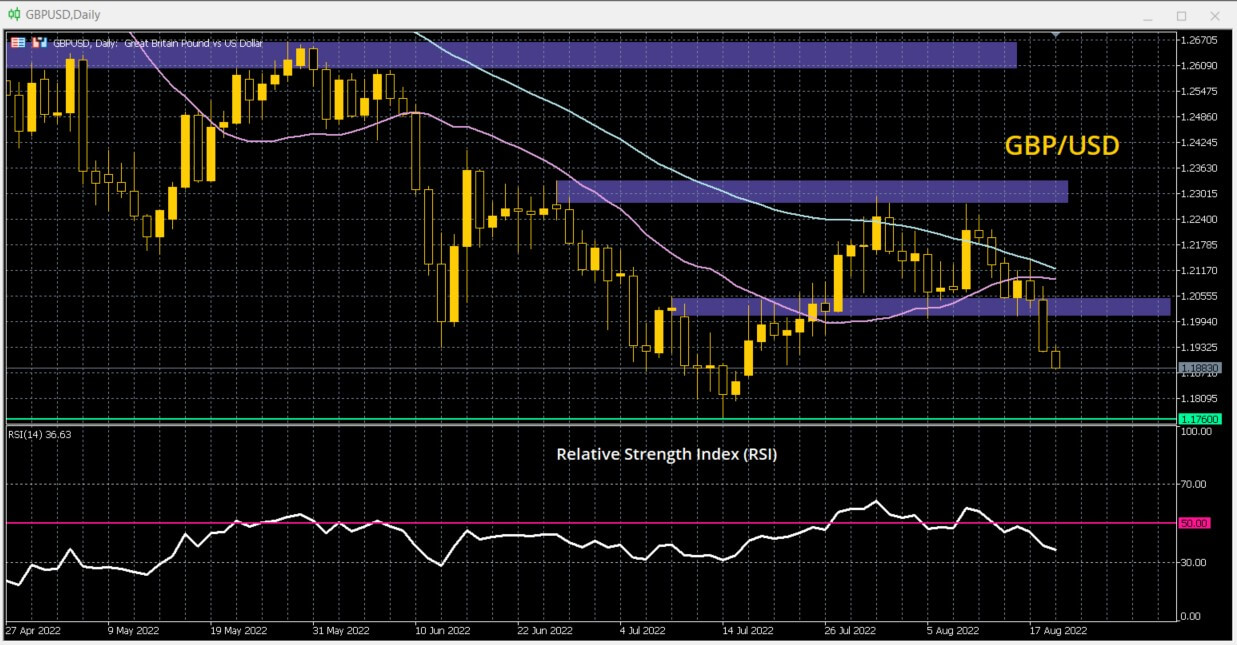 Commodities: Precious metals are increasingly corrective, whilst the latest rally in oil looks to be another chance to sell.

Indices: US futures are drifting back into support. European indices are mixed. 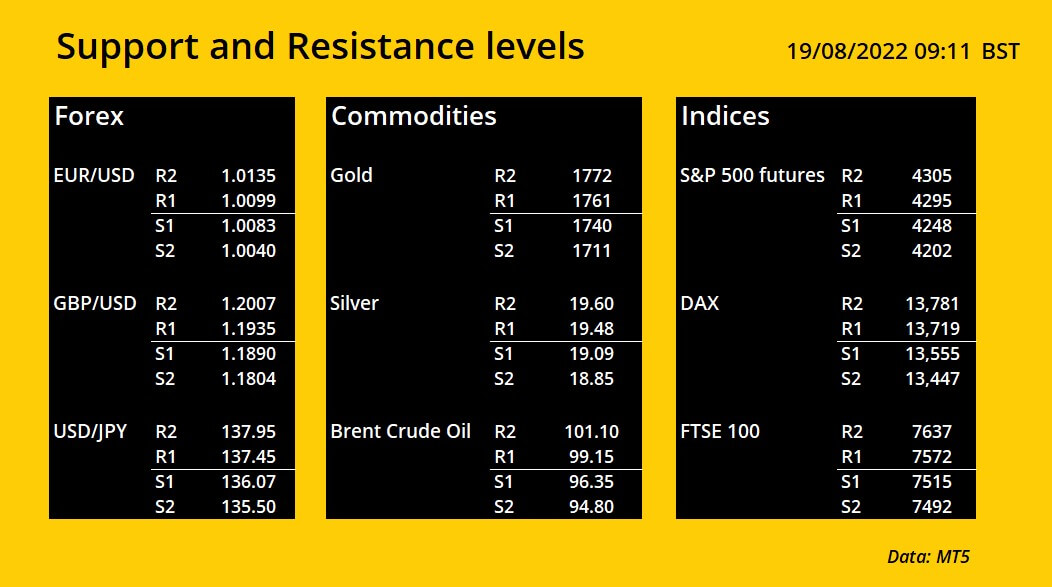