Markets continue to react to US data pointing to an economic slowdown. Whilst this is weighing on bond yields and the USD, it is also a concern for risk assets.

Risk appetite is being flung around right now. There are two competing views. There are growing signs of economic slowdown in the US. Retail Sales and Industrial Production were both in decline yesterday, whilst the PPI decline also reflects reducing pricing pressures. This all eases pressure on the Federal Reserve to tighten interest rates. Less aggressive tightening is USD negative but also tends to be positive for risk appetite.

However, Fed speakers are trying their hardest to talk up interest rates. There are also concerns about what the economic slowdown in the US does for demand. Risk assets such as equities started to pull back yesterday after a strong run higher in recent weeks. This move continues today. The Australian and New Zealand dollars are also under corrective pressure (although weak Australian employment and the news of New Zealand’s Prime Minister Ardern standing down have not helped). For now, this is a blip in risk appetite, but it needs to be watched.

There is a clutch of second-tier US data on the economic calendar at 13:30 GMT. However, the ECB minutes for the December meeting will be assessed for any hawkish bias towards the potential for more 50bps rate hikes. US Building Permits are expected to have increased slightly in December. However, this would only recover some of the significant reduction seen in November and is still below all other months in the past twelve. US Housing Starts are expected to continue the trend of decline. Weekly Jobless Claims remained a shade above 200,000 last week (the lowest since September) but are forecast to increase slightly. The Philly Fed Manufacturing Index is expected to improve slightly. The data will be in focus after the huge and unexpected decline in the New York Fed Manufacturing on Tuesday.

Market sentiment sours: Risk assets are struggling today. Equity markets are dropping back, AUD and NZD are underperforming, whilst oil has turned lower.

US Treasury yields continue to fall: US yields fell sharply yesterday after the weak US data., and this move is continuing today. The 10-year yield is under 3.40% and is at its lowest since September, with the 2-year yield dropping towards the key 4.00% level.

Hawkish lean from Fed speakers: Loretta Mester (2024 voter) and James Bullard (2025 voter) are both very hawkish on the FOMC. However, they continue to remain hawkish and show little sign of budging in their view. Both said yesterday that they see the Fed Funds rate moving above 5%.

Australian employment surprisingly contracts in December: The employment level unexpectedly fell by c. 15,000 in December (+22,500 exp). The participation rate has also dropped. The headline jobless rate remains at 3.5%. AUD is under selling pressure.

New Zealand Prime Minister Ardern to step down: Jacinda Ardern has been prime minister for six years and will step down in February.

ECB’s Lagarde and Fed speakers scheduled: Lagarde will be an important watch for EUR positions today. There is also an array of Fed speakers from across the spectrum.

Forex: There are mixed signals on forex pairs. AUD and NZD are the main underperformers. JPY is strengthening once more with EUR also positive.

Indices: The strong rallies are losing some momentum amid consolidation. 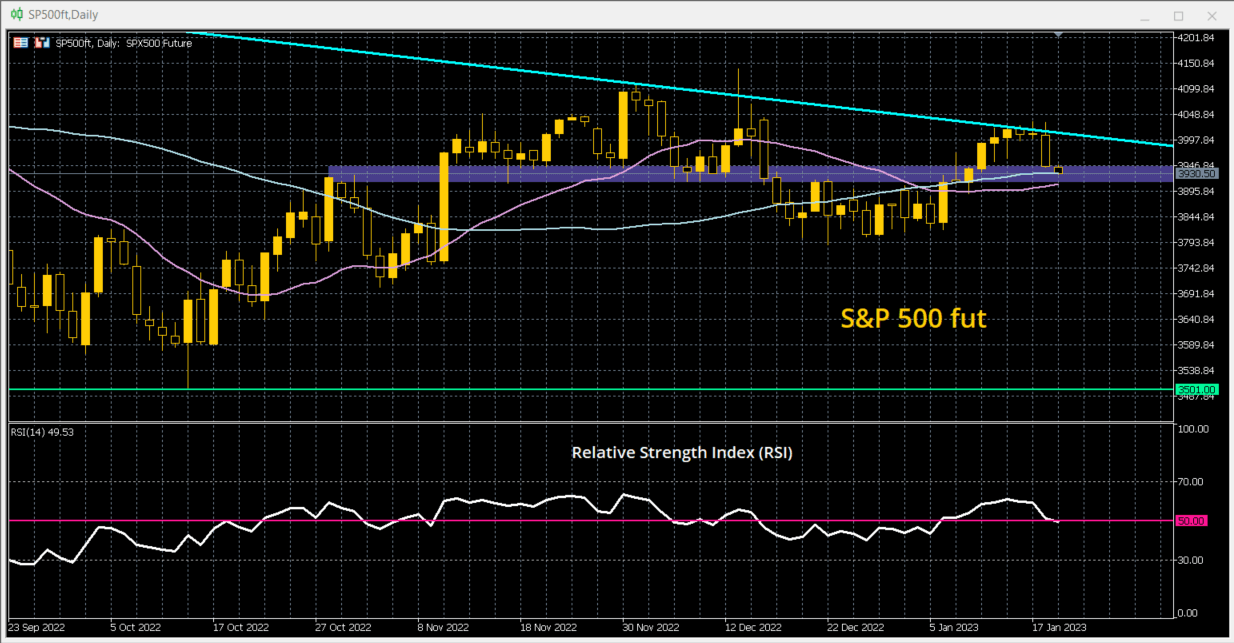