After not even a day of respite, risk assets are being sold off once more and the USD is a tower of strength. Geopolitical risk and rising bond yields are again key factors. 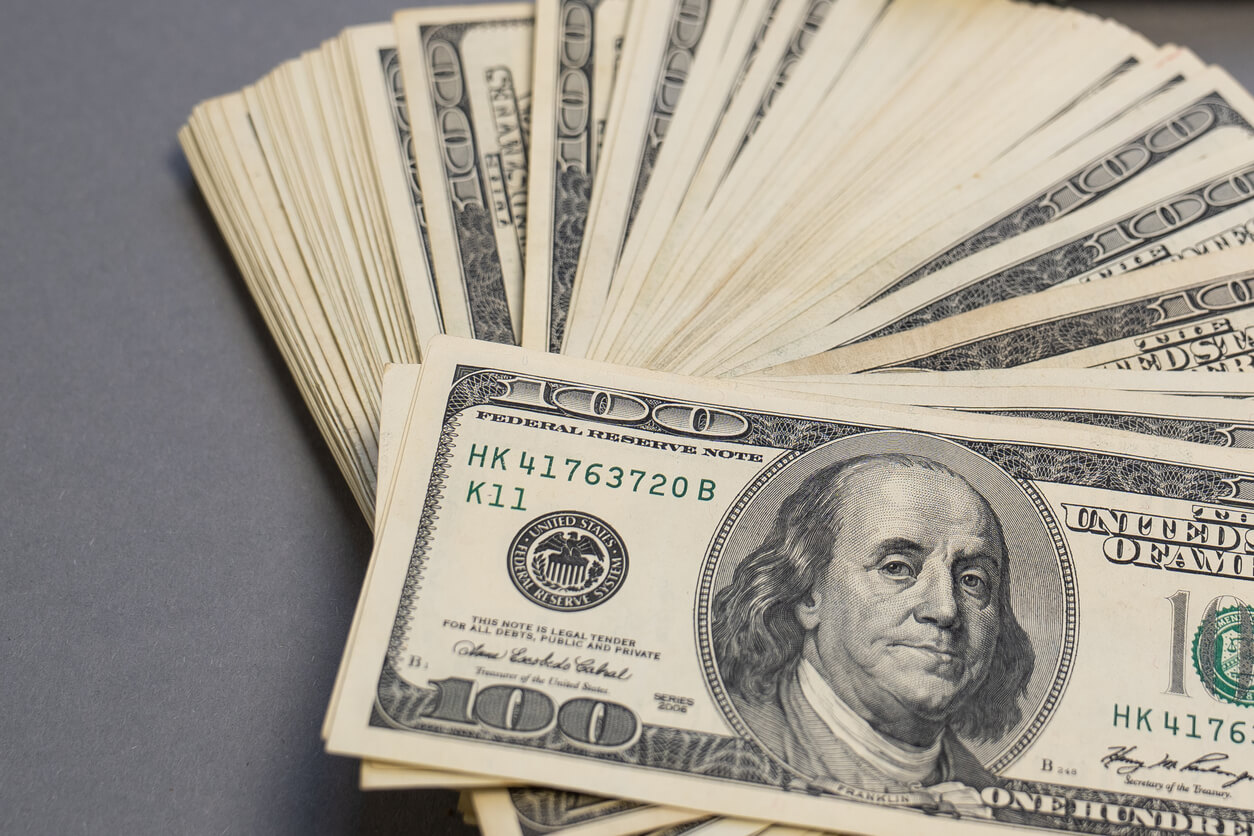 After the capitulation of Friday and Monday, there was a sense that maybe a turnaround could take hold yesterday. That move was quickly snubbed out and risk appetite has faltered sharply into Wednesday. Geopolitical fears are once more bubbling up as the gas pipelines of Nordstream 1 & 2 have been sabotaged. Once more the USD is a massive outperformer on major forex, equity markets are under huge selling pressure and commodities are falling.

An update on the calamity that is the UK. In the wake of the unfunded tax cuts of the Government’s mini-budget on Friday, bond yields continue to shoot higher. The Bank of England (via chief economist Huw Pill) has said that it stands ready to support GBP but appears happy to just use verbal intervention for now. When asked for a comment on the BBC, former US Treasury Secretary Larry Summers said that it was the sort of IMF communication that was given “much more frequently to emerging markets with new governments than to a country like Britain”. Scathing indeed. UK assets continue to be sold.

Once more, it is all about the US and the Fed on the economic calendar today. The US Goods Trade Balance is expected to show a slight reduction in the deficit in August. Pending Home Sales are expected to decline by around -0.5% in August meaning a decline of -23% on a 12-month basis. Elsewhere there are as many as five Fed speakers scheduled for today, including Fed Chair Powell.

Market sentiment dives again: Risk appetite has once more deteriorated sharply, leaving the USD as the only asset that traders/investors are willing to buy in a sea of red.

Gas pipeline “sabotage”?: The gas leaks of Nordstream 1 and 2 could be the result of sabotage. However, the cause is yet unknown and the US says that it is not in anyone’s interest. There are reports out of Denmark of a geological survey that recorded two tremours around the time and location of the gas leaks.

IMF criticises UK Government tax plans: In an unusual move, the IMF has criticised the UK Government for its planned tax cuts. The IMF has said that they are likely to increase inequality and also add to pricing pressures.

Bank of England is ready to act: In response to the UK Government tax plans, the Bank of England’s chief economist Huw Pill has said that the Bank “cannot be indifferent” and that it would be ready to deliver a “significant monetary policy response” to protect GBP. The comments allude to a response in the scheduled November meeting rather than an emergency reaction. Presumably, that is, unless GBP moves further into freefall.

Cryptocurrencies fall over again: The near-term rallies of the last couple of days have been sold into. Crypto fell back into the close last night and is sharply lower again today. Bitcoin is -1.7% at $18750 whilst Ethereum is -3.5% at $1279.

A swathe of Fed speakers: Fed Chair Powell speaks today at 14:10GMT. With the market turmoil currently being seen (especially in bond markets), Powell’s comments will be certainly watched. There are also several other Fed speakers to watch for. The FOMC’s Bostic (2024 voter, leans hawkish) is at 12:35 GMT. The FOMC’s Bowman (permanent voter, slightly hawkish) is at 15:00 GMT. And finally, the FOMC’s Evans (2023 voter, very dovish) is at 18:00 GMT.

Broad outlook: A risk sell-off has resumed. Everything is being sold apart from the ever-strengthening USD.

Forex: USD is decisively outperforming major forex, with the AUD and NZD the big underperformers.

Commodities: Precious metals are under mounting selling pressure, as is oil. 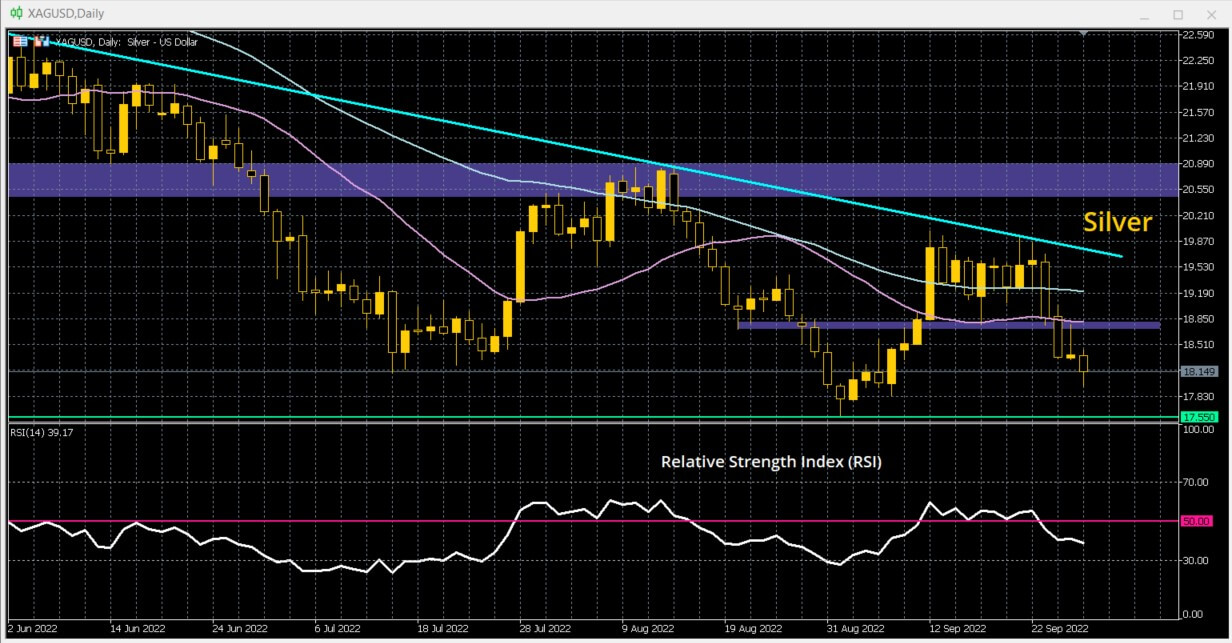 Indices: Wall Street is testing the June lows, but the DAX and FTSE 100 have already decisively breached their equivalent supports. 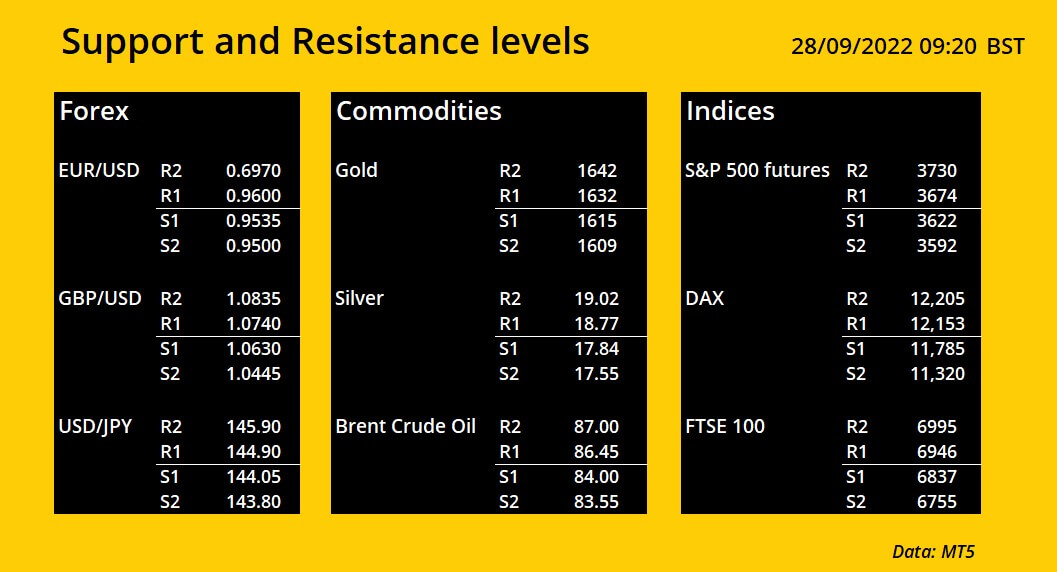