Broad sentiment has shown signs of recovery this morning. UK Gilt yields have fallen back after verbal reassurance from the Bank of England has helped to support an ailing GBP. USD is weaker, with commodities and indices rebounding. 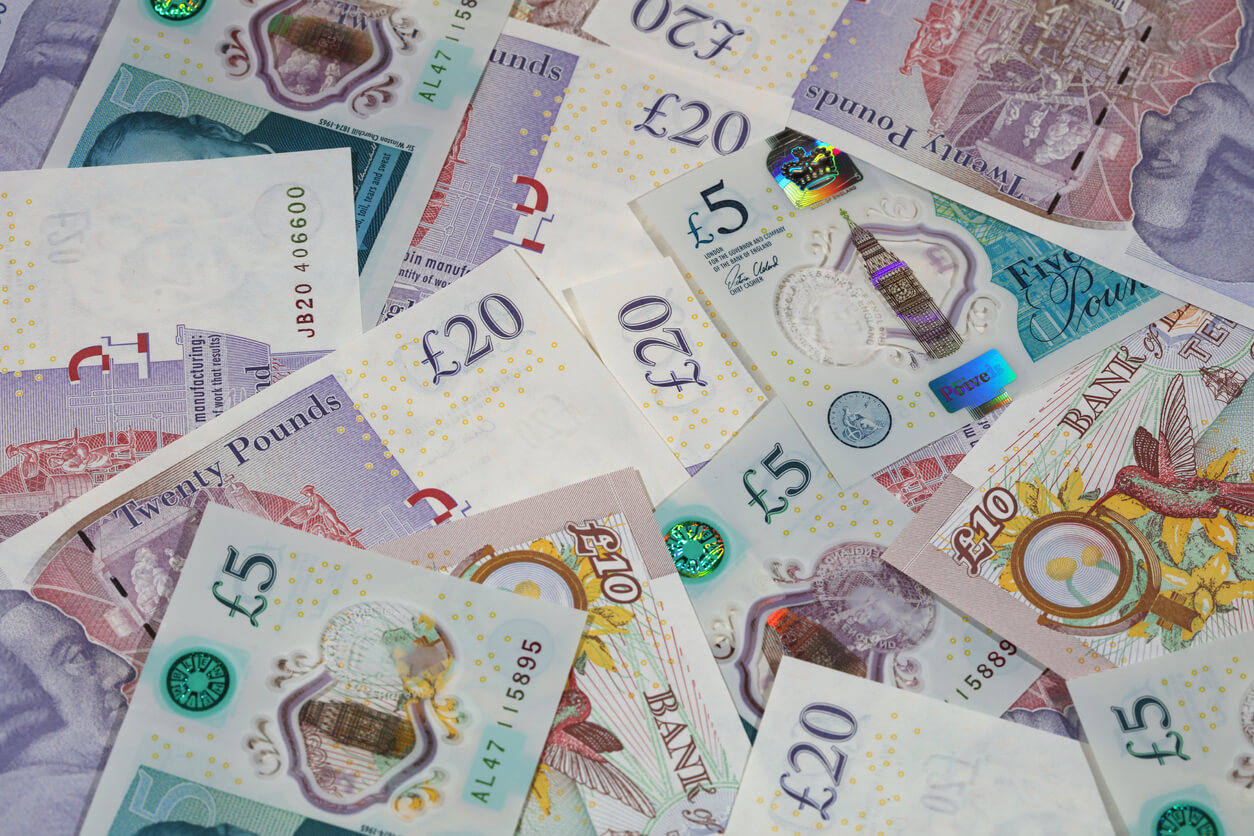 After the rout of recent days, where levels of capitulation were seen in GBP, there is a sense of recovery forming this morning. Last night, with market chatter of emergency rate hikes, the Bank of England announced that it was monitoring the situation closely. It would not hesitate to step in with emergency measures. It is too early to know if this is a turnaround moment. However, for now, UK Gilt yields have dropped and GBP is recovering.

The stability has resonated across major markets. There is a recovery versus the dollar across major forex pairs. Commodities are also ticking higher with Gold +1% and Silver +2% higher. Oil has also rebounded c. +2%. US futures are also responding with gains of over +1%, moves which are helping to support European indices this morning. There are even strong recoveries on cryptocurrencies too. After the rout of risk assets in recent sessions, it could be time for "Turnaround Tuesday”.

It is all about the US on the economic calendar today. The Durable Goods Orders are expected to grow slightly in August. The Conference Board’s US Consumer Confidence is the main data point, expecting to see a slight improvement in September. New Home Sales are expected to continue to deteriorate by around -2%

Market sentiment improves: USD is underperforming major forex. This is helping commodities and indices to recover.

Treasury yields are lower: Yields have moved sharply higher in recent sessions. However, the US 10-year and 2-year yields are both around -5bps this morning.

Bank of England tries to settle UK markets: The Bank of England has said that it is monitoring markets “very closely” and that it would not hesitate to step in with emergency interest rate changes. The new UK Chancellor, Kwasi Kwarteng, who announced the mini-budget on Friday, has said that debt-cutting plans will be issued on 23rd November. The UK 10-year Gilt yield is around -10bps lower this morning.

Central bankers speak: Fed Chair Powell speaks today. In light of recent bond market moves, his comments will certainly be watched. The FOMC’s James Bullard (2022 voter, extremely hawkish) is at 13:55 GMT. There are also speeches from the FOMC’s Evans (2023 voter, seen as the most dovish on the FOMC) at 10:15 GMTand the FOMC’s Kashkari ((2023 voter, now a centrist).

Broad outlook: A risk recovery is on today.

Forex: USD is underperforming major forex, with GBP and NZD leading the recovery.

Commodities: Precious metals and oil are looking to recover after recent declines. However, there is now heavy resistance overhead. 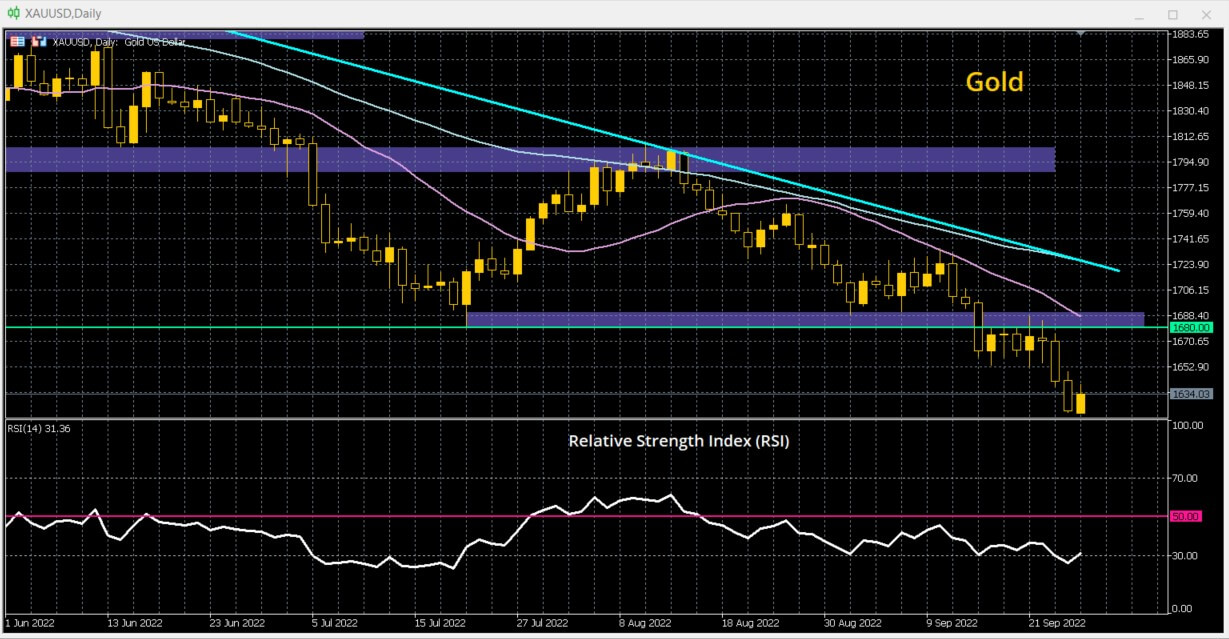 Indices: Support is starting to form around the June lows. 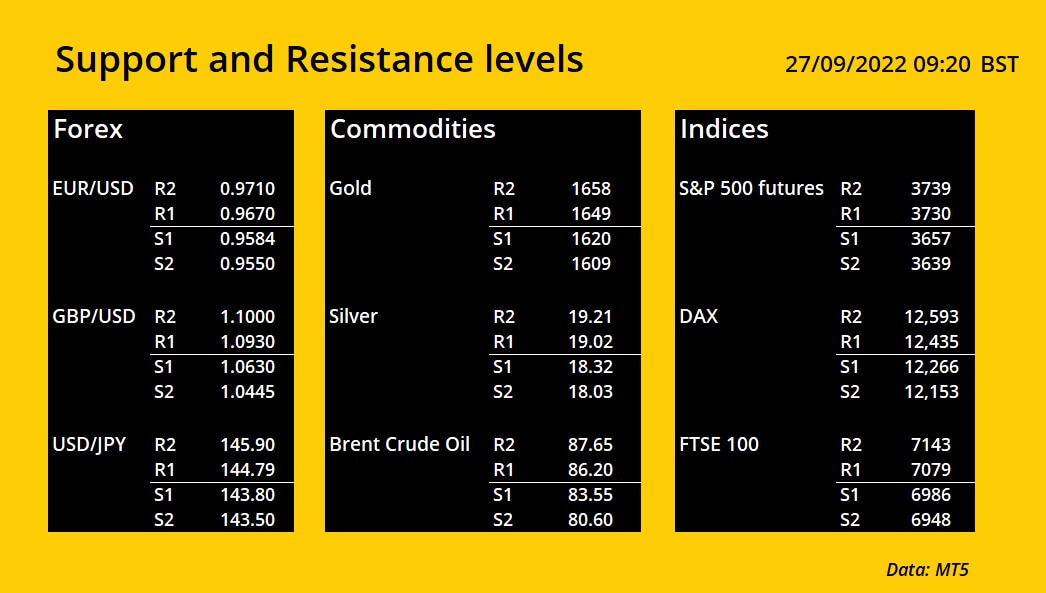