After another negative close on Friday, broad sentiment has picked up early this week. The political upheaval continues for the UK, but a new Chancellor is at least providing support for GBP, but it might be short-lived. 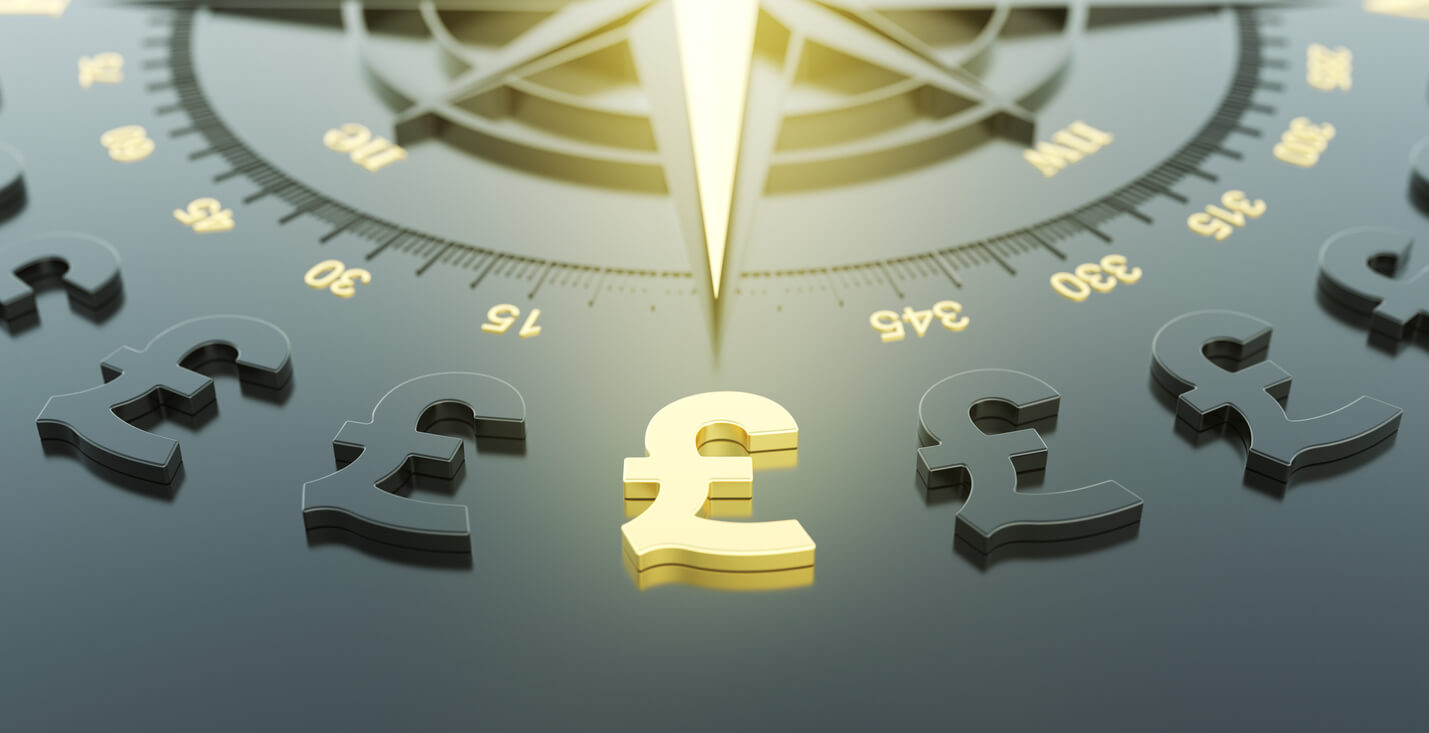 After a new UK Chancellor of the Exchequer (finance minister) was announced on Friday, it did not take Jeremy Hunt long to trash the previous economic policies of Prime Minister Truss. There will be further details announced later today, but it seems that “Trussonomics” is about to be declared dead in the water. Major markets are responding well to this news this morning, especially GBP. The question is, how long will the rebound last? With open questioning of Liz Truss’s position as Prime Minister, the political turmoil is unlikely to die down any time soon.

Positive risk appetite has taken hold across major markets. The USD is underperforming major forex, whilst commodities and equity markets are rebounding. This is being helped as Treasury yields have eased off slightly this morning. We still expect this improvement in sentiment is likely to be short-lived. The focus is on inflation for major economies in the coming days. This could help to cement expectation that the US remains the best economy of a bad bunch. As such USD will remain in favour in due course.

It is a fairly light economic calendar to start the week. The New York Fed Manufacturing (also known as the Empire State Manufacturing) survey is the only significant data of note. Forecasts are mixed, but the consensus is looking for a deterioration. Subsequently, the reading is also expected to remain slightly negative and suggests continued contraction.

Treasury yields ease off: A mild drop back for US yields is playing into the improvement in sentiment.

UK political turmoil continues: After a new Chancellor of the Exchequer (finance minister) was installed on Friday, the calls to replace Prime Minister Truss after less than two months in the position are growing. Some of her own MPs are openly calling for her resignation. This is only likely to sustain the elevated volatility of GBP in the coming days.

UK fiscal update this afternoon: New UK Chancellor of the Exchequer Jeremy Hunt will look to calm the UK fiscal turmoil with an update on plans this afternoon. The announcement is at 14:30 GMT. This is likely to cause further moves on GBP.

Broad outlook: A risk recovery early in the new week. Rallies have tended to be short-lived.

Forex: GBP is the main outperformer. USD is underperforming across major pairs. 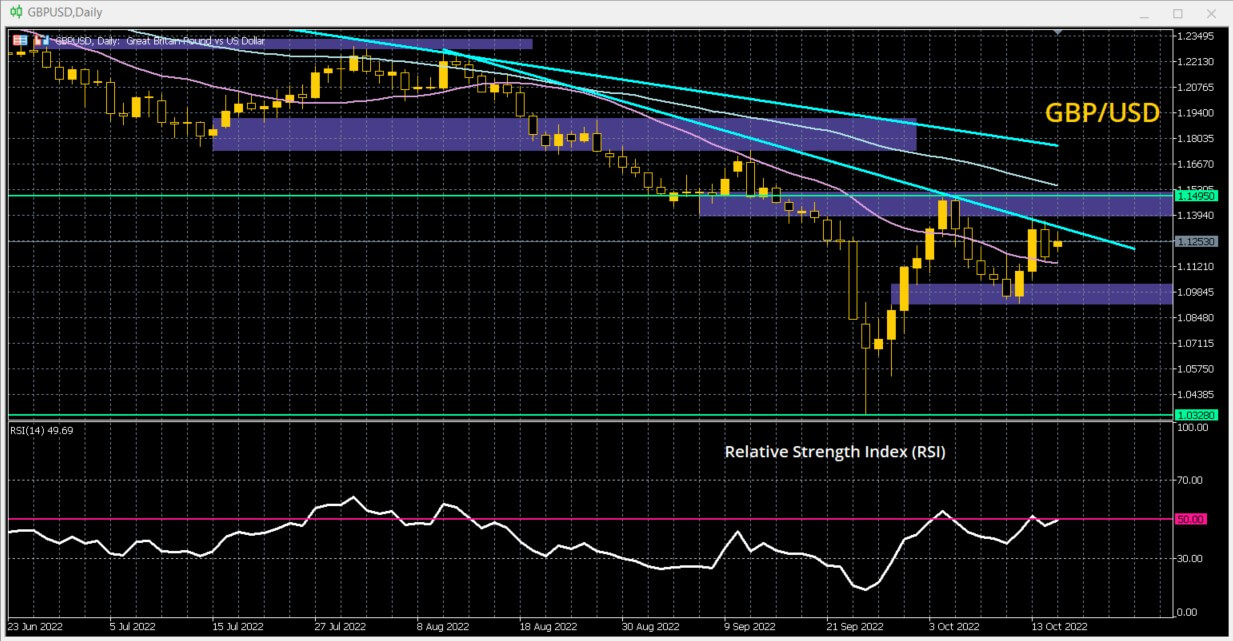 Indices: Volatility remains elevated and markets are swinging around, but the overhead pressure of resistance remains significant. 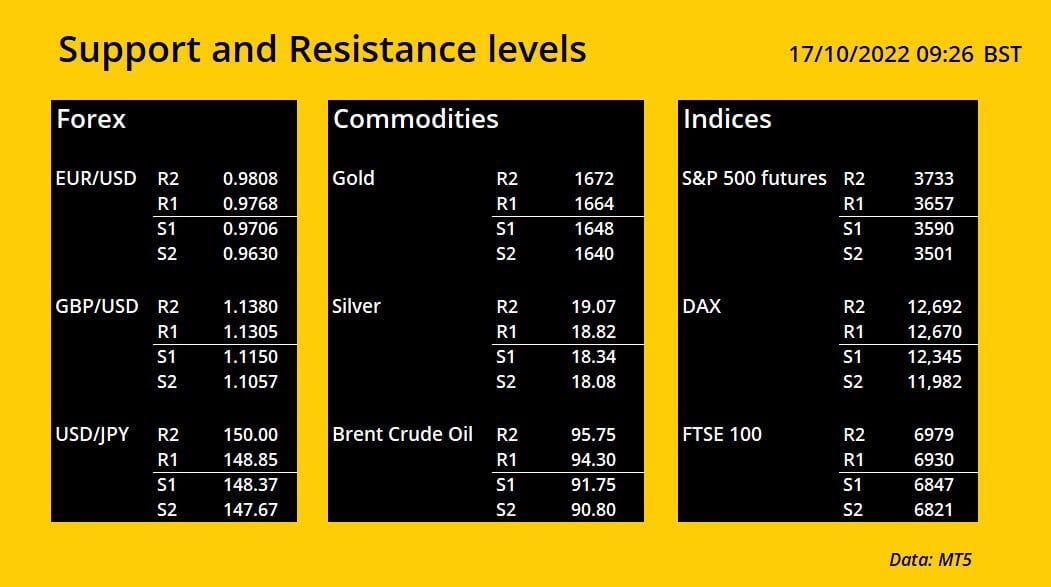