After Friday’s sharp risk rally amid falling US bond yields and a USD pullback, we are seeing uncertainty creeping in once more today. 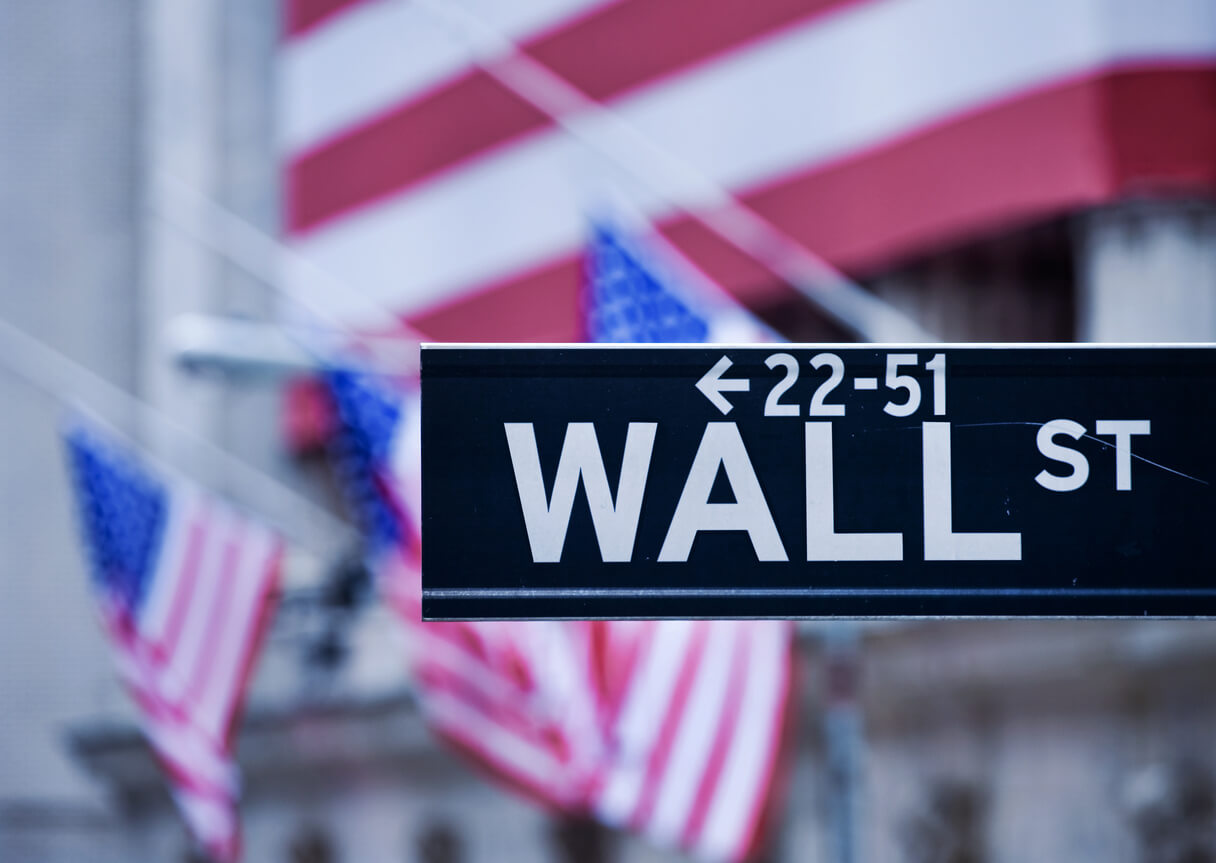 Signs of currency intervention from Japan on Friday weighed on US bond yields. This pulled the USD lower and allowed a risk rally to run through Wall Street. The conditions had been set up for this to continue this morning, with US Treasury yields lower again. However, there is an air of caution setting in once more. US futures have dragged back and the USD is finding support again, weighing also on commodities.

The one main exception to all this is support for GBP. Sterling has been buoyed by news that Boris Johnson, the divisive former Prime Minister, will not be standing in the Conservative leadership election (just four months after he left as Prime Minister). This leaves Rishi Sunak as a clear front-runner. Sunak is seen as a relatively safe pair of hands for the economy. This is helping to ease UK risk premium, with the UK 30-year Gilt yield dropping already from 4.05% to around 3.90% this morning.

The economic calendar is concentrating on flash PMIs today. With Japan and Eurozone data out earlier, the consensus is looking for the UK flash PMI to fall slightly on the composite and remain below 50. This is expected to be driven by mild deteriorations in both services and manufacturing. Analysts are looking for the US Flash PMIs to not only improve but also to take the composite back above 50 into the mildest of expansion (at 50.1).

Chinese Q3 growth beats forecasts, September data mixed: GDP picked up by 3.9% QoQ in Q3 (following -2.6% in Q2) which was better than the 3.4% forecast. Activity data for September was mixed. Industrial Production beat expectations as it improved to +6.3% YoY (from 4.2% in August) but Retail Sales fell to 2.5% (from 5.4%) missing expectations. On the trade data, exports were slightly better than expected, but imports were slightly worse.

Eurozone flash PMIs fall more than forecast: The Composite PMI dropped to 47.1 in October (from 48.1 in September). This missed the 47.5 forecast.

UK Flash PMI also misses: The Composite has dropped to 47.2 from 49.2 in September. The consensus was looking for 48.1.

The UK may have a new prime minister today: Rishi Sunak is now the clear front-runner in the Conservative leadership race. Unless Penny Mordant receives over 100 Tory MP nominations by today, Sunak will be the leader and therefore the new Prime Minister.

Cryptocurrencies holding the rebound momentum, for now: Crypto rebounded well on Friday and continued higher over the weekend. There are signs of the move stalling this morning, but Bitcoin is at $19300 and still +0.6% higher from Friday’s close. Ethereum is +2.6% at $1337.

Broad outlook: A cautious and negative bias to market sentiment.

Forex: USD is gaining once more, although EUR is holding up relatively well. GBP is the primary underperformer.

Commodities: Intraday rallies on precious metals are a chance to sell. Oil is again falling over.

Indices: Wall Street has turned lower again, this is weighing on European indices too. 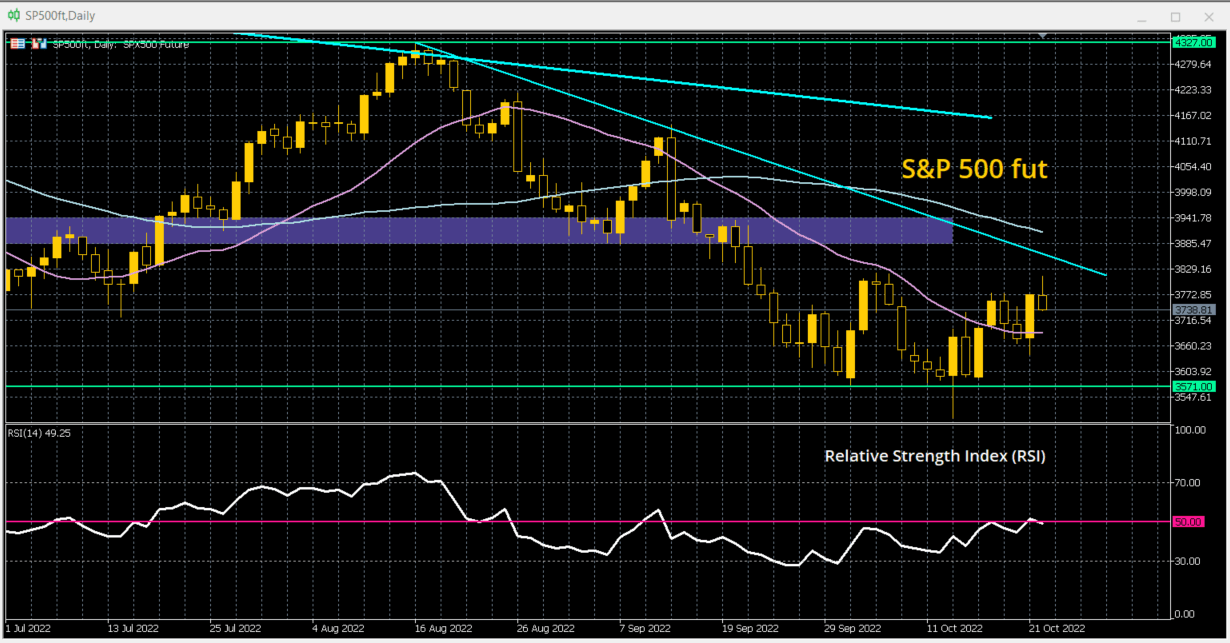 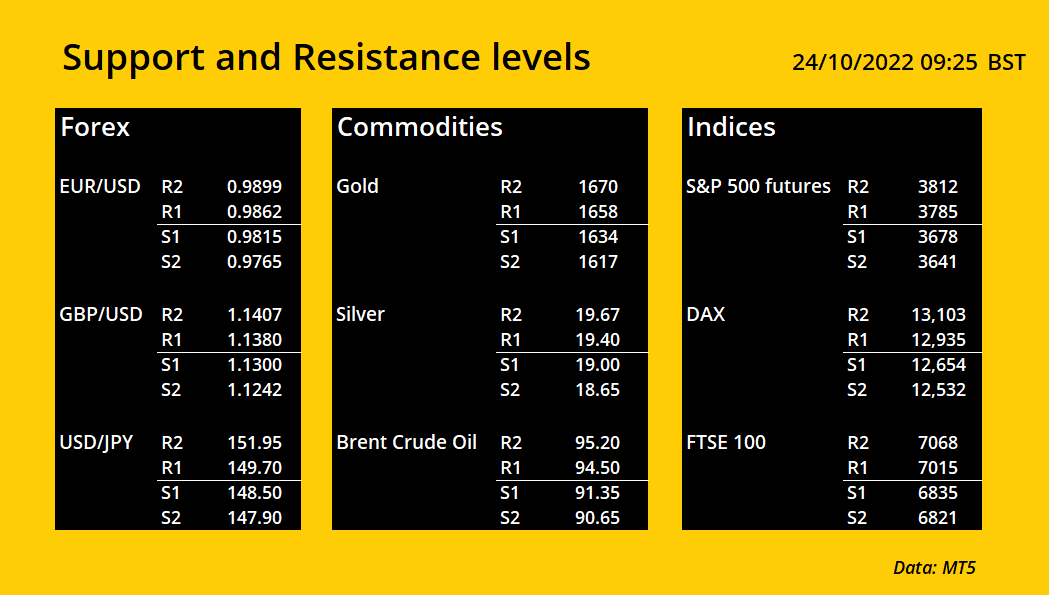