Espresso Morning Call: A pause ahead of the Fed

With the USD having regained some lost ground, markets are sitting in wait for today’s Fed meeting. There is a feeling that this could be a pivotal moment.

Major markets look settled ahead of a crucial FOMC meeting later. After the USD has been gradually regaining lost ground in recent sessions, there is an initial move against the USD once more today. This is helping commodities and equities to build on support. However, although there is a slightly more positive bias to sentiment this morning this is more likely to develop into a consolidation as traders wait to see the outcome of the Fed meeting. US Treasuries have been choppy recently, but the 10-year yield having rebounded since Friday is hovering around the 4% mark. US index futures especially sit cautiously in wait.

Markets have been building up to another crucial FOMC meeting. All the talk in the past couple of weeks has been about whether we are about to see a Fed pivot. Another aggressive rate hike of 75bps is all but nailed on. However, will the Fed begin to guide towards less aggressive hiking over the coming meetings into Q1 2023? Market reaction will be fascinating. The Fed is still likely to be another 75/100 basis points away from the terminal rate (currently priced around 4.90%). There is room for another leg up in the USD over the coming weeks. However, this is also likely to be seen as the USD bull run reaches maturity. This could be a very important meeting for knowing more.

The Fed dominates the economic calendar today, but also a look at US jobs. The ADP Employment change is expected to dip slightly but remains broadly around the 200k level. Coming into the FOMC meeting, the consensus is still looking for +75 basis points of hikes taking the Fed Funds range to 3.75% / 4.00%. Markets will be looking for signs of a “Fed pivot” in the statement or press conference.

Market sentiment is slightly positive ahead of the Fed: USD is falling back again, with commodities and equities higher. However, this may recede as the Fed meeting approaches.

Tensions on the Korean Peninsula: Both North and South Korea are reported to have conducted missile tests near the border. This may heighten tensions between the two.

Eurozone final Manufacturing PMI revised slightly lower: The final October Composite has been revised down to 46.4 from the 46.6 flash. This is a deterioration on the final September reading of 48.4.

Cryptocurrencies a shade lower: Crypto was choppy during yesterday’s session, with mild gains. Bitcoin is slightly lower this morning, -0.2% at $20440, with Ethereum -0.5% at $1566.

Broad outlook: With a continuation of choppy recent moves, sentiment is more positive initially today. The Fed meeting is likely to be a big driver later though.

Forex: The USD is back lower again, underperforming major forex. The JPY and NZD are the main outperformers.

Indices: Wall Street has been slightly more cautious in recent days, and with the Fed meeting approaching, European markets are also a little shy. 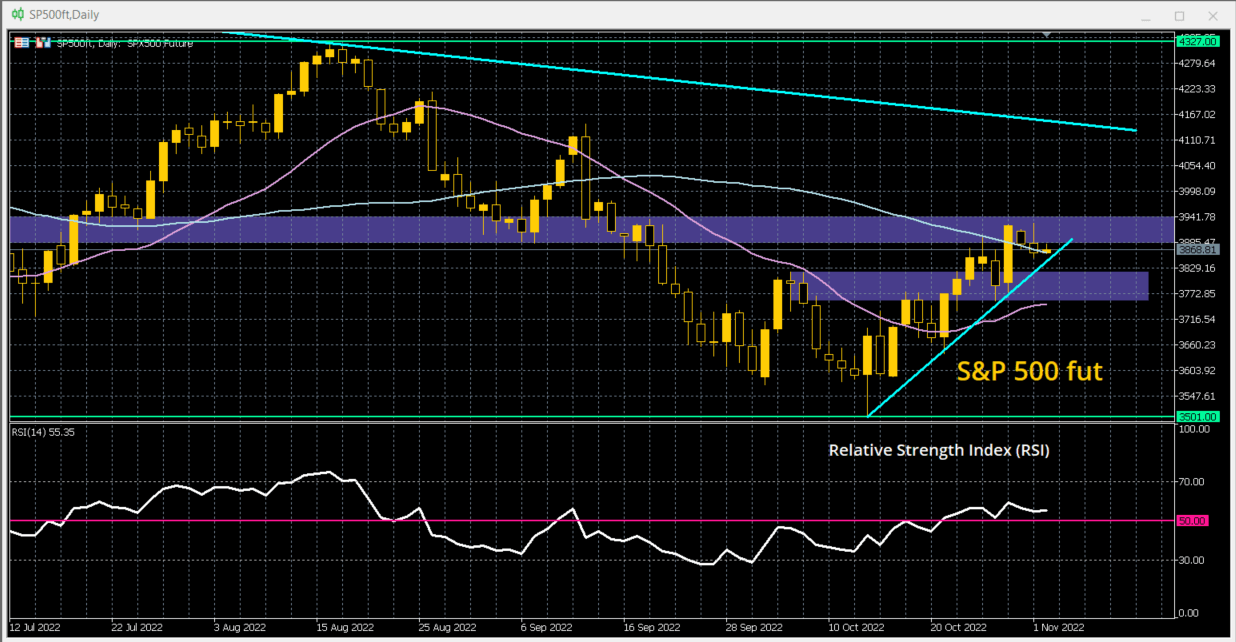