Equity markets limping towards the end of a tough year

Another correction in equities has formed in recent weeks. Profits built up over October and November are being taken as markets limp towards the end of 2022.

2022 has been a tough year for equity markets. Aggressive central bank monetary policy tightening and a confidence-sapping war in Ukraine have driven sentiment spiralling lower. Moves have not been all one way, but as we approach the year-end, another rebound is being sold into. Downside targets are renewing and we look set to move into 2023 in a difficult moment.

Throughout 2022 there has been a strong negative correlation between US bond yields (specifically “real” US bond yields) and equity markets. Bond yields had been moving lower since October as markets had positioned for a less hawkish Fed (i.e. the “Fed pivot”).

However, the December FOMC meeting showed the Federal Reserve trying to sound more hawkish in its fight against inflation. It was trying to prevent markets from thinking the job on inflation had been done. Yields have been subsequently ticking back higher again. 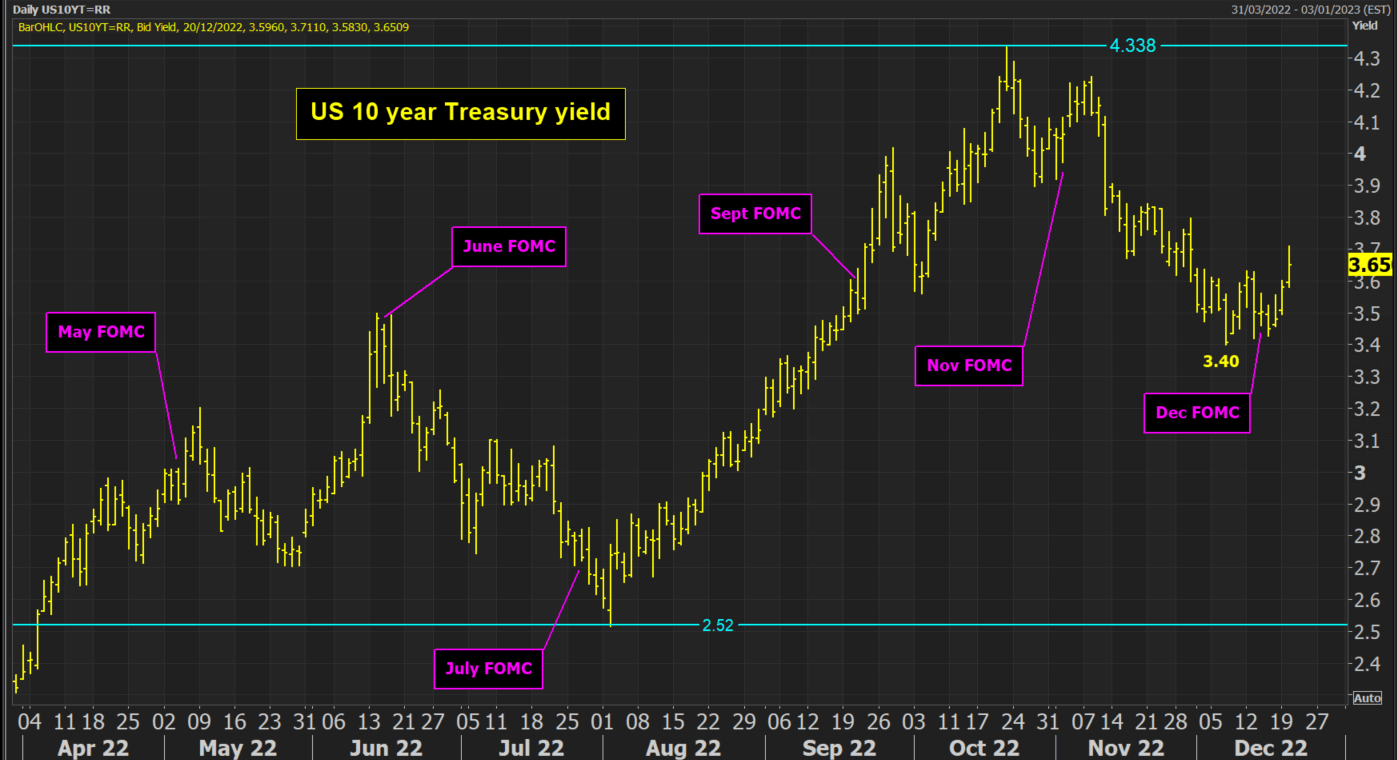 This move higher in the nominal 10-year US Treasury yield is important as it is also moving “real” US bond yields higher (bond yields minus inflation). As we see below, inflation expectations have been tracking lower in the past couple of months. But with the sharper decline in the nominal yield, it has pulled the real yield lower (something that helped the October/November rally on equities, see later).

However, yields are now moving up more aggressively than inflation expectations. This is pulling the real yield higher. 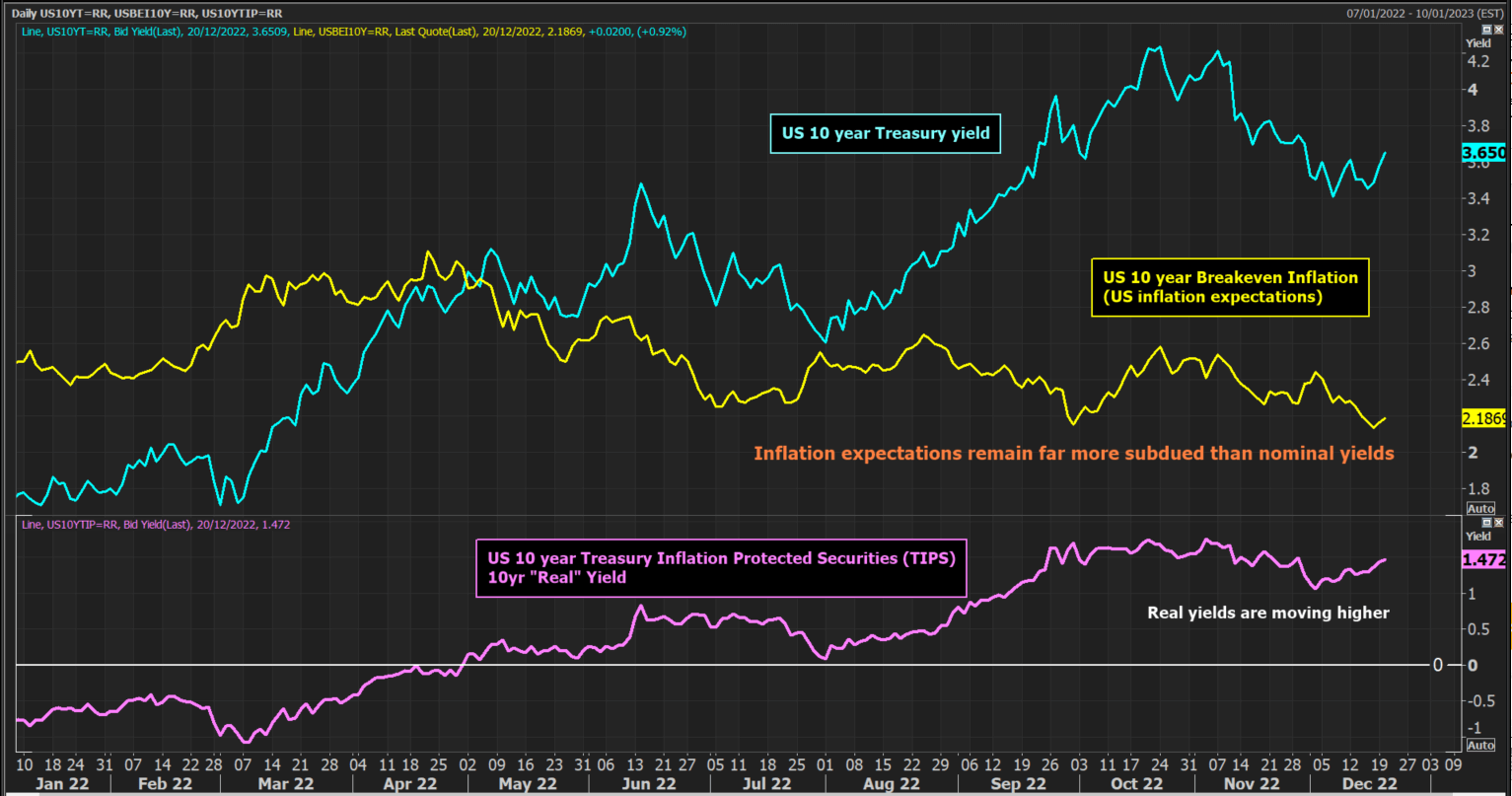 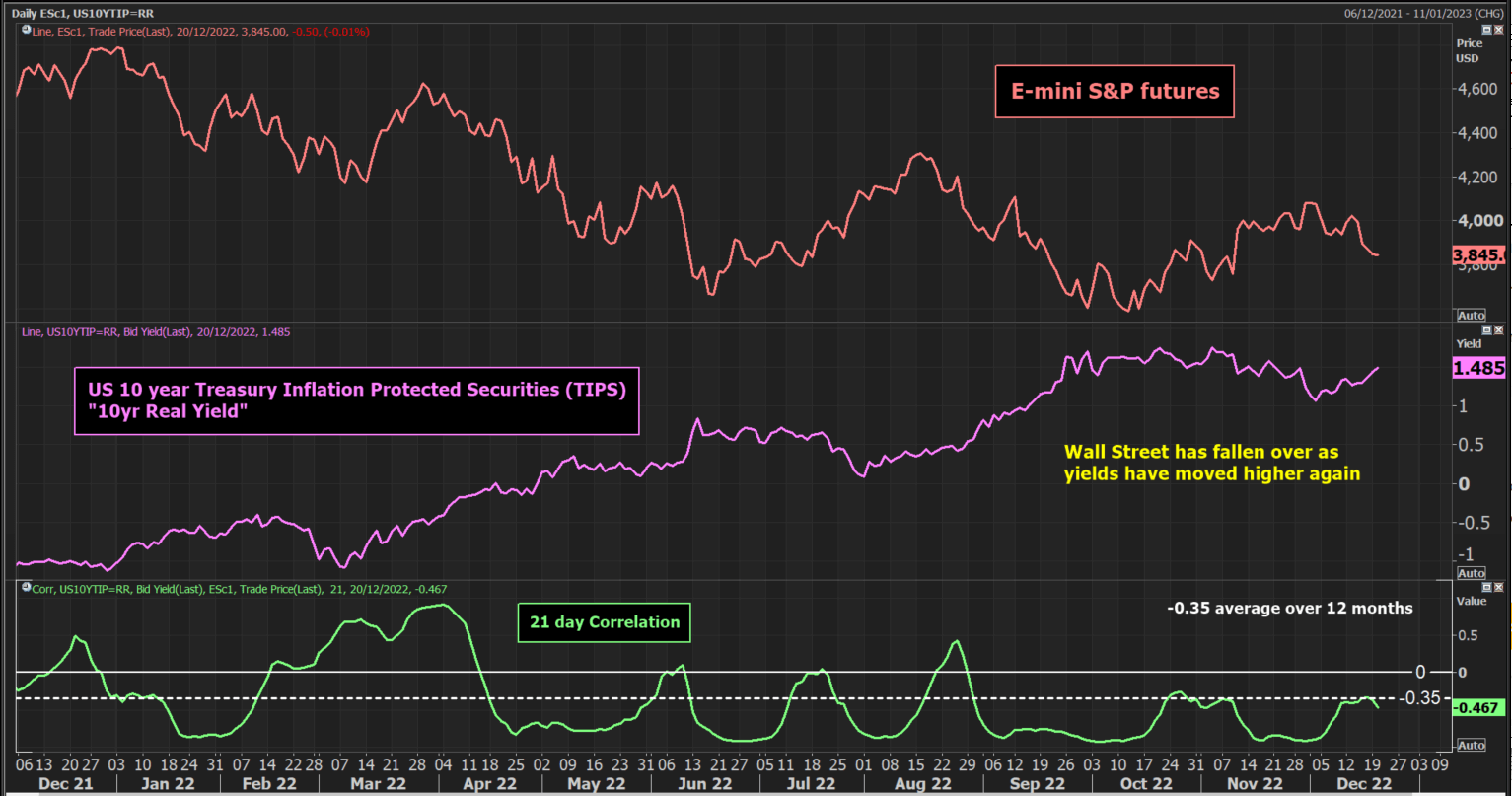 2022 has been a terrible year for equity markets. The S&P 500 futures have fallen by as much as -27% from the peak in early January. There have been periodic interim rallies, but the selling pressure has been dominant and rallies have been seen as a chance to sell.

The October/November rally was almost the same size and duration as the June to August rally. After the rally peaked in August, there was another leg lower to the year lows. 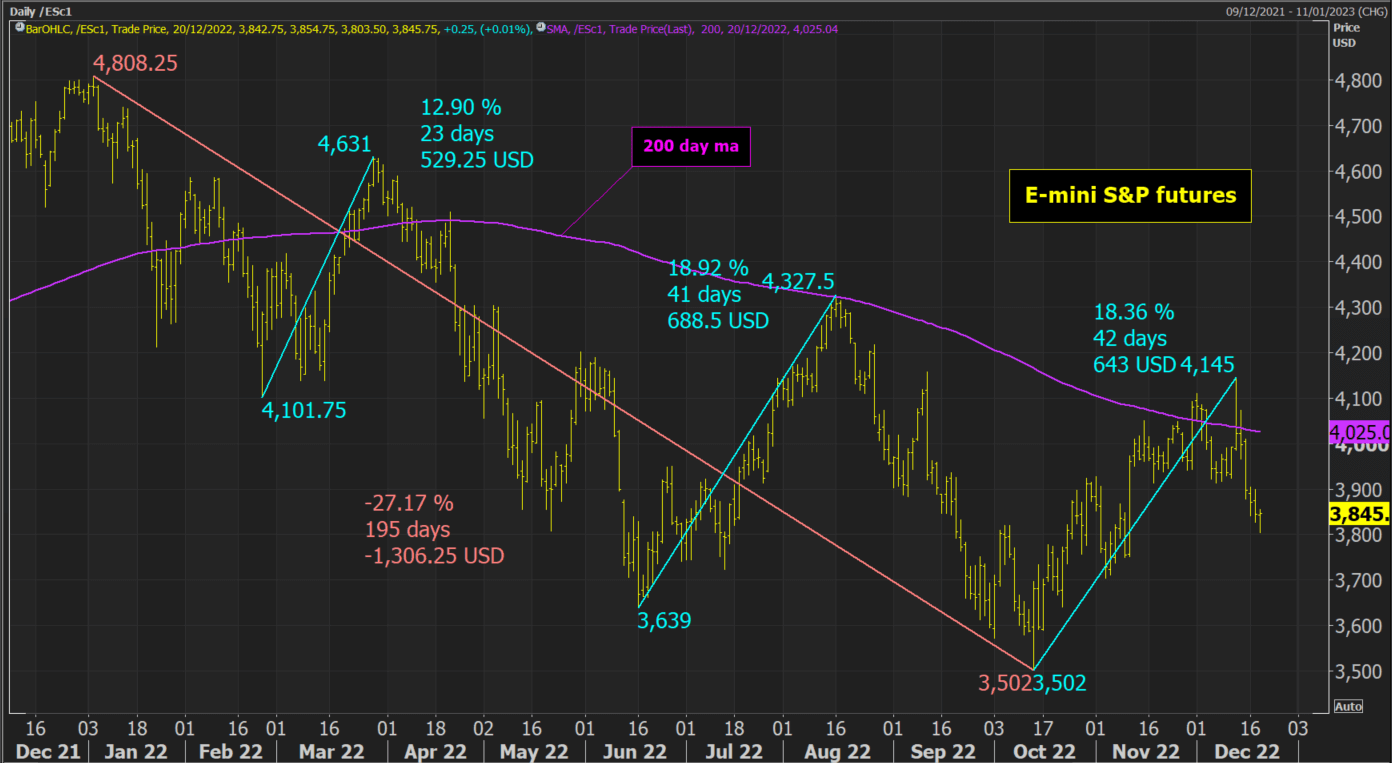 The worry is that the latest rally has allowed fund managers to lock in any profits in an attempt to get out of a terrible year with a degree of respectability. The rallies have subsequently rolled over to form bearish reversal top patterns. The prospect of a Santa Clause rally to end the year is looking increasingly remote. 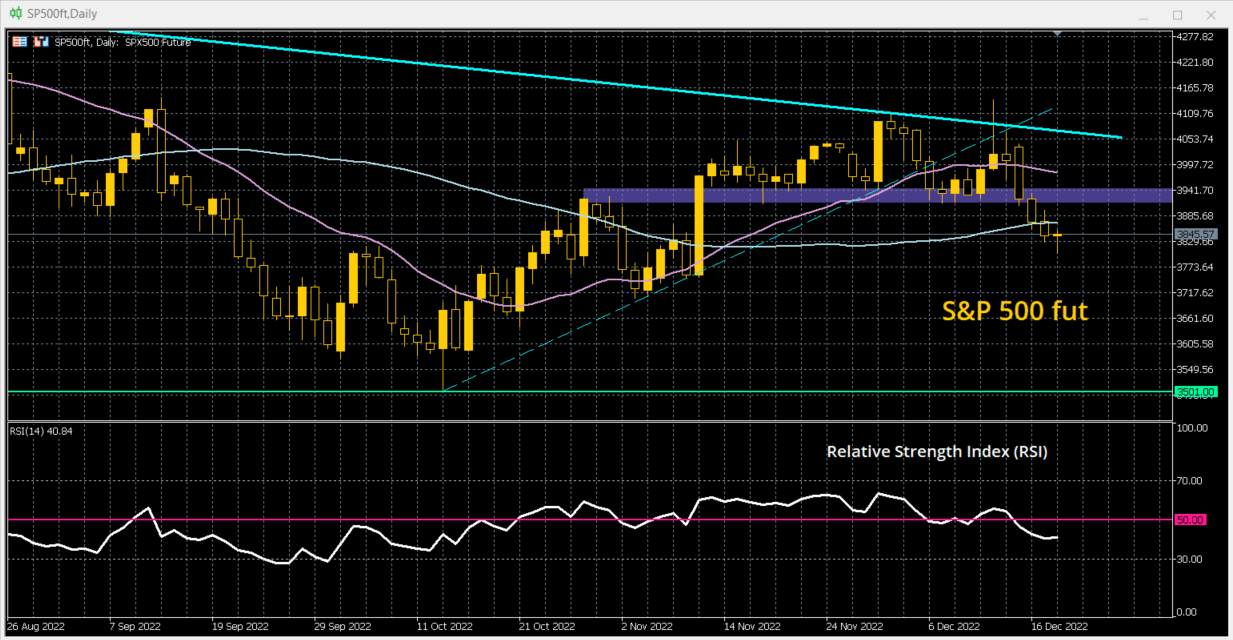 Looking over in Europe, the German DAX Index (GER40) completed a top below 14125. Interestingly, the downside target of around 13700 has already been achieved as the market has rebounded today. The bottom of the 13600/13970 support band will be important, as will resistance now at 14125/14195. 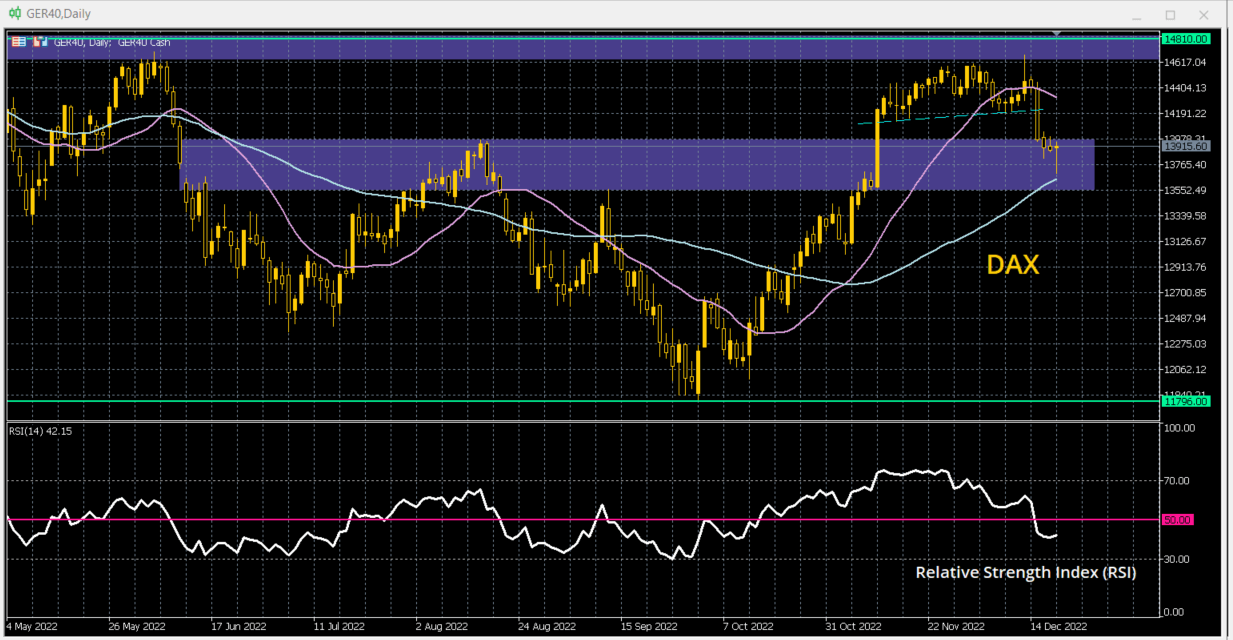 Finally, for the FTSE 100 Index (UK100), the corrective move kicked in on a move below 7437. This formed a head and shoulders top pattern which implies a corrective target of 7240. Having rebounded intrada this morning, how the market reacts to the band of resistance now between 7385/7437 will be key. However, with the corrective configuration on the daily RSI and the new downtrend formation, it seems that near-term rallies may be seen as a chance to sell. 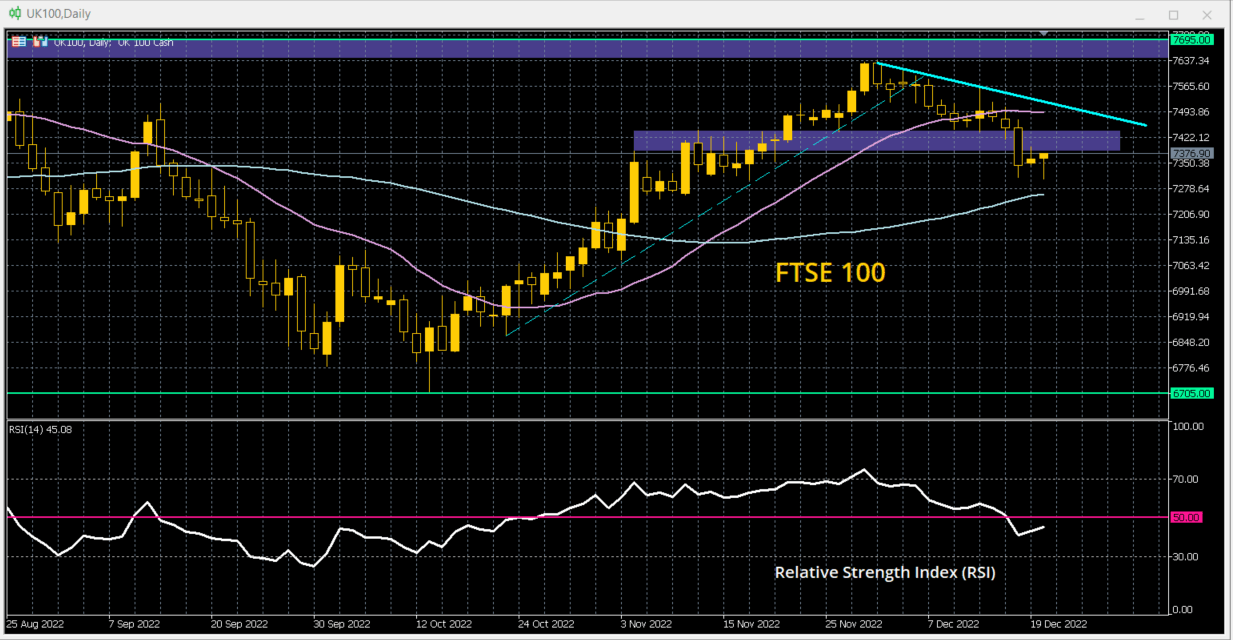