Assessing the impact of key moves across major markets

We look at the cross-asset implications of the sharp rise in bond yields. Forex pairs are turning USD positive, Indicies are increasingly choppy and Commodities are selling off. 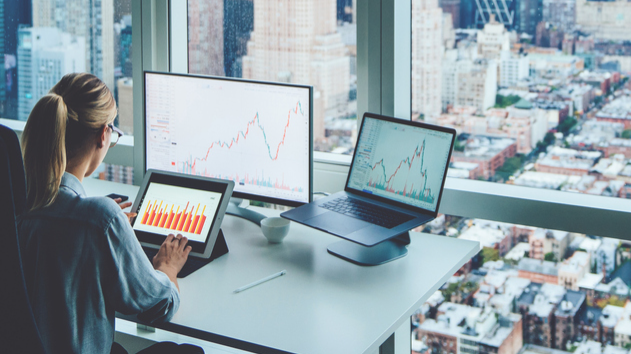 Trading major markets have become something of a wild ride in the last few sessions. There are several factors behind this, however, primarily, it seems that bond markets have woken up to the prospect of the Federal Reserve tightening monetary policy. This is reverberating across major markets with key reactions seen in the US dollar (USD), precious metals, and Wall Street.

Why are markets suddenly moving?

Bond yields have made a sudden and sharp move higher. It took almost 24 hours in the wake of the September FOMC meeting, but the US 10 year yield has increased by around 25 basis points (a quarter of a percentage point).

A more hawkish path of interest rate increases came out of the FOMC meeting. One hike could be seen in 2022 and three in 2023, compared with the suggestion (in the dot plots) of just the two hikes in 2023 previously. This has certainly driven bond yields higher (traders tend to sell bonds on the prospect of interest rates moving higher). However, there has also been a spike higher in the oil price that has played a role, with higher energy prices increasing inflationary pressures. Higher inflation also tends to result in bonds being sold and therefore yields moving higher.

The question is whether this increase in bond yields is set to continue? The technicals show a barrier between 1.55%/1.70% which may restrict the move higher, for now.

We have spoken previously at length about the medium-term ranges on major forex. This move on bond yields has now decisively broken some key ranges.

EUR/USD breaking below 1.1600/1.1665 is a key breakdown. Reaction on an oversold technical rally towards 1.1665 will be key. A failure around here would confirm the new breakdown. Our expectation would then be that the pair then builds a new medium-term trading range between 1.1400/1.1750.

We talked previously about indices losing their primary uptrends and developing medium-term trading ranges. This seems to have been confirmed by recent price action.

The S&P 500 futures (MT5 code: SP500ft) are solidifying support at 4290/4335 but the resistance of a lower high at 4470 is also strengthening. The market has become very choppy within the range. We favor buying into the weakness, as the corrections on Wall Street tend to only be around -5%/-6%. This drawdown from the 4548 all-time high has already been seen.

The growing negative pressure on commodities from rising bond yields and a strengthening USD was something we discussed previously. This has resulted in some key breaks.

Gold (MT5 code: XAUUSD) has had one of the more contained of the moves, however, there is still a decisive move lower. The market has broken below the old pivot support band $1745/$1760 with consistent lower highs and lower lows. We believe that near-term rallies (this old support becoming new resistance) are a chance to sell for moves towards $1675/$1700.