The signs are turning positive for indices once more. Key resistance levels are being tested and a breakout would open a new recovery phase. 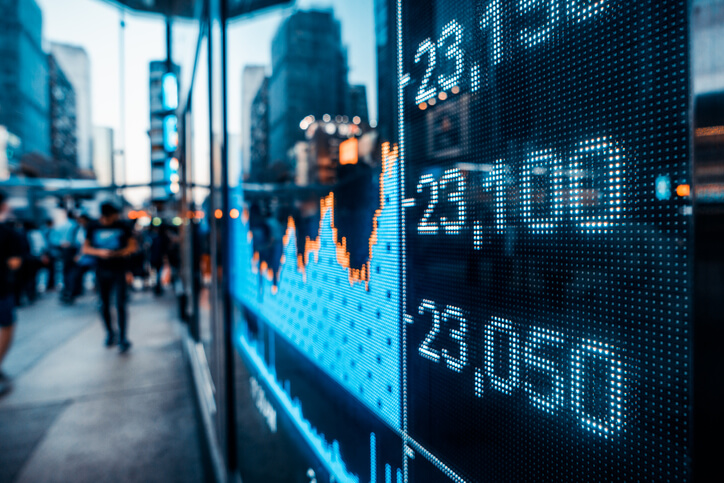 It is as though someone flipped a switch on Wall Street. Suddenly the glass was no longer half empty. It was instead half full. A sharp rally into the close last night has shifted sentiment across major indices. A positive bias is starting to develop. Markets are pushing on resistances rather than testing support levels. A near term turnaround is building as indices threaten to generate renewed recovery momentum again.

Looking at the path of indices over the past month, we can see that there is little decisive trend of note. A swing higher went into reverse towards the end of March. April has been mostly a month of turning negative. However, another upswing is now developing.

The NASDAQ outperforms on the way up but underperforms on the way down. The NASDAQ index is packed with high growth, tech stocks that are attractive during risk positive phases. Investors Move their attention away from the more sedate value stocks of the Dow Jones Industrial Average or the FTSE 100.

It is a similar picture to the German DAX. Even more so than normal (due to the Ukraine war), the DAX is swinging around with sentiment. Subsequently, if sentiment is turning positive, we can expect the DAX to perform strongly again. Note how the DAX is outperforming FTSE 100 in today’s rebound.

The resistance key levels being tested on Wall Street

Looking at the technical analysis of major indices, we see several are testing key resistance levels and barriers to recovery (such as downtrends). However, markets appear to be generating recovery momentum now.

Firstly, the S&P 500 futures (MT5 code: SP500ft) has been in a consistent run of lower highs and lower lows for the past three weeks. With yesterday’s rally leaving a higher low at 4371 (above the 4355 key low) the market is testing the key near to medium term pivot band resistance at 4466. Already we see momentum turning positive. The 4-hour chart shows a decisive improvement, with momentum at its strongest positive level throughout April. A decisive move above 4466 confirms the end of the downtrend phase and the formation of a new positive trend. We would then look to use supported weakness as a chance to buy for renewed buying pressure towards a test of 4520 and then 4585. The NASDAQ 100 futures (MT5 code: NAS100ft) have fallen decisively throughout much of April, but are now turning higher. The immediate test is the first lower high at 14,295 with the pivot band of resistance then up towards 14,455. There is still some work for the buyers to do to convince them that this is a sustainable turnaround (the daily RSI back above 50 would help). However, it looks as though two consecutive positive sessions could be turning into three today (if early moves are anything to go by). If 14,455 can be breached as resistance this would re-establish positive traction once more for the recovery. As discussed earlier, Dow futures (MT5 code: DJ30ft) have held up well in recent weeks. The support band around 34,000/34,200 has been held throughout and a pick up is testing what is essentially a three and a half month downtrend. Momentum is already positive and the market is positioning for a move higher to test initially resistance around 35,000 but more importantly the key March high of 35,280. This would certainly suggest that the value end of the spectrum is far more solid for investors on Wall Street. And in Europe too…

We are also seeing positive signs in European markets too. The German DAX (MT5 code: GER40) has been tentative in recovery in recent sessions, but a move above resistance at 14,325 would be an encouraging signal. This would open a test of 14,610.

However, this is where the more considerable test comes in, as it would also see the decisive three and a half month downtrend tested. Above that is the key resistance band 14,800/15,000. So, there are plenty of barriers to gains overhead for the DAX, but if risk-on rally continues, then the DAX will likely to be leading the way. Finally, we have the FTSE 100 (MT5 code: UK100) which has been an excellent performer throughout the Ukraine war. So much so, that the market is once more within touching distance of multi-year highs again.

However, our caveat is that FTSE 100 tends to underperform during phases of risk positive trading. Despite this, there is good support now at 7485/7530 and even during the past three weeks of Wall Street selling pressure, FTSE 100 performance has remained positive. FTSE 100 really is the “Steady Eddie” of the major indices.