Indices at a key technical inflexion as corrections threaten

Major indices have turned lower in the past week and are now approaching key support levels which could open the next wave of corrective pressure. There is one exception though. 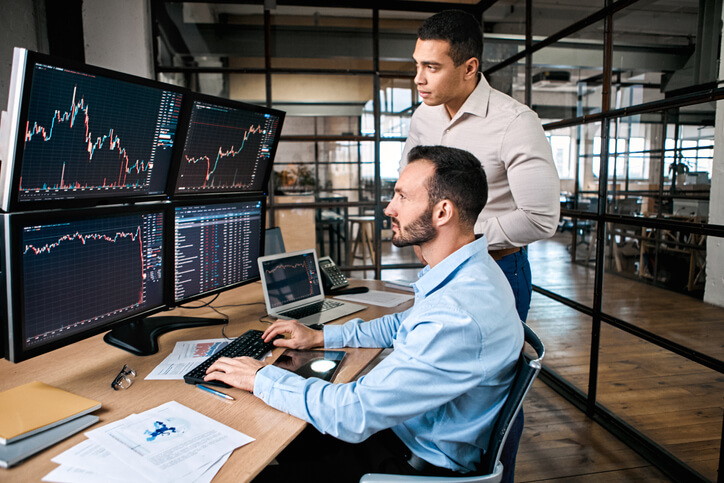 Sentiment for the recovery in equity markets has leaked away over the past week. Where buyers were once happy to support weakness during the March rally, this mood has now turned on its head. Indices are now finding sellers invariably winning the sessions and markets are building a series of lower highs forming. The corrective pressure will ramp up if approaching key support is broken. Markets are around key inflexion points.

The perception is that geopolitical risk is no longer reducing

The war in Ukraine continues to be a key driver of indices. Positive traction in the peace negotiations has faded. Furthermore, given the atrocities that are being uncovered as the Russian forces retreat, the prospect of a peaceful end to the war is fading once more.

The impact has been for major indices to roll over. This selling pressure could ramp up in the coming days if the next round of sanctions on Russia is deemed to be significantly economically damaging to the major economies. Banning Russian oil and gas could certainly play into the category.

Looking into the performance of major indices in the past month, we see the March rally faltering. The Wall Street rally was led by the NASDAQ but that is now beginning to underperform on the way down.

This is also true of the German DAX and French CAC which had both outperformed strongly on the rebound. They now seem to be underperforming on the way down. The performance of the FTSE 100 just seems to still be steady, regardless of what the other markets are doing.

The mood seems to have soured on Wall Street. This is reflected in the S&P 500 futures (MT5 code: SP500ft). Already having seen the rally falter at 4630, there has been a lower high at 4588. The technical significance of this grows with the formation of a “bearish engulfing” one-day candlestick. The market is now making lower highs and lower lows. This is the classic definition of a new bear market trend starting to form.

The crucial inflexion point is at the support band 4418/4444. This is a medium-term pivot support and below here, the market would turn decisively corrective and open 4320/4335 as the next test. The daily RSI momentum indicator moving below 50 would add confirmation of a new corrective move. The NASDAQ 100 futures (MT5 code: NAS100ft) rally worryingly fell over bang on the resistance at 15,260 which was also a key overhead supply. As with the S&P futures, the market has topped out, leaving key resistance now at 15,200/15,260 and is moving into reverse gear again. An implied initial downside target suggests a test of the key pivot support around 14,390/14,430 will now be seen. A breach of that support would be a decisive corrective signal. Dow Futures (MT5 code: DJ30ft) are also reversing lower. The inflexion point for the Dow comes in a far longer-term pivot band of support sitting at 33,925/34,210. A decisive move below here would be a key corrective signal. The concern is that already we see the RSI leading the market lower as it has dipped this morning below 50. We're also seeing European indices deteriorating once more. They are also standing at the brink of a crucial inflexion point.

The German DAX (MT5 code: GER40) found resistance in the rally at 14,930 which also held a three-month downtrend. The market has also now formed a lower high at 14,610 and is retreating to a crucial support level. The trading band between 14,100/14,200 was key on the way up. Now, on the retreat, this pivot band serves as a key gauge of support. A closing breakdown would open a much deeper correction, with 13,575 and potentially 13,275 the next targets. The French CAC (MT5 code: FRA40) is also under growing corrective pressure. A close below 6465/6495 support would open a deeper move lower. Closing a gap at 6402 would be the first move but beyond that, further downside towards 6161/6205 could be seen. There is one exception, for now

However, there is one exception to all this growing selling pressure. The FTSE 100 (MT5 code: UK100) is holding up extremely well considering. The market broke to new 7 week highs yesterday and is holding up again this morning.

Momentum in the move higher is not as strong as it once was, but the market is still managing to find buyers into near term weakness. A breach of the first higher low support at 7485 would be a warning, but for now, the bulls remain in control. Remarkably, the multi-year high of 7695 is just over 100 ticks away (c. 1.5%)