After disappointing US data saw Wall Street suffer into the close, we see risk appetite has tailed off once more. This comes ahead of some crucial central bank speakers at the ECB forum in Portugal. 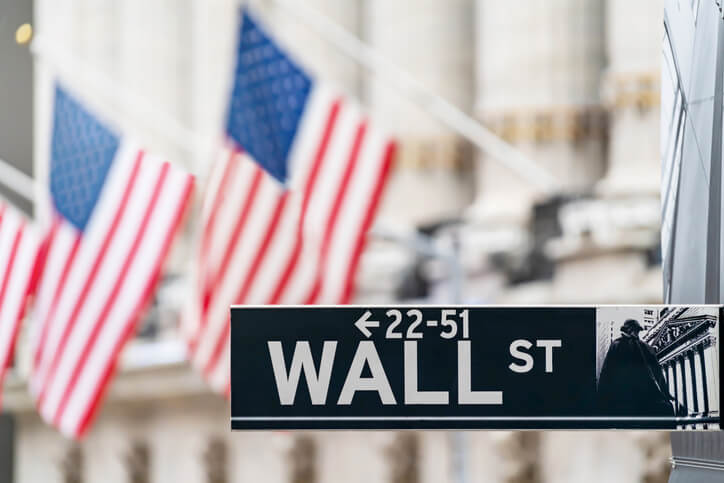 Risk appetite has faltered once more as Wall Street sold off into the close for a second consecutive session. Weaker than expected US data are perpetuating recessionary concerns after the US Consumer Confidence and Richmond Fed Manufacturing data deteriorated worse than expected. This is leaving sentiment pressured as the USD is starting to strengthen once more and equity markets fall over again. We have continually seen rallies on indices being sold into throughout 2022 and the latest rebound seems to have been just another opportunity. The deterioration in risk appetite is also reflected in the declines in cryptocurrencies with Bitcoin again back to the $20,000 mark.

It is a day for the central bank chiefs at the ECB‘s Forum on Central Banking in Portugal. It is the big guns too, with Fed Chair Powell, the ECB’s Lagarde and the Bank of England’s Bailey. Each has a fine balancing act for fighting inflation without inflicting recession. Comments will be watched by traders today.

There is also a batch of Eurozone and US data on the calendar. Eurozone sentiment data is expected to deteriorate in June for economic, industrial and services. The German inflation data is always worth watching as the continent’s largest economy is seen as a gauge for Friday’s Eurozone inflation. US final GDP for Q1 may be a bit of a non-event as it is almost three months backwards-looking and is also expected to be unrevised.

Market sentiment falters, again: Concerning US data has driven flow back into safe-haven plays. This is seeing US yields ticking lower, USD strengthening, whilst commodities are falling back and indices are under selling pressure. US futures are consolidating, for now.

Treasury yields fall back: Longer-dated Treasuries continue to be more volatile to market swings, with the US 10-year has dropped back by -6bps, whilst the 2-year yield is -3bps.

Sweden and Finland set for NATO membership: Turkey has been a stumbling block but has now seemingly dropped its barriers for the two countries to join NATO.

Cryptocurrencies slip back: With risk appetite faltering, crypto has also suffered. Bitcoin fell by -3% yesterday and is a further -1% lower this morning. The price is back around the next psychological level of $20,000.

Central bank chiefs speak: The big hitters are all speaking at the ECB’s Forum on Central Banking today. At 1300BST Fed Chair Powell, ECB President Lagarde and Bank of England Governor Bailey are all speaking. Currency traders of USD, EUR and GBP will be on alert.

Broad outlook: Sentiment has deteriorated once more since yesterday afternoon. However, US futures are consolidating and the USD strengthening is still being held back. So for now the negative sentiment is contained.

Forex: Consolidation with a hint of USD strength, although GBP is positive, AUD is the main underperformer.

Commodities: Precious metals and oil have rebounded in the past couple of sessions, but retain near-term negative trends.

Indices: Indices fell over yesterday. Although US futures are reasonably settled this morning, European corrective pressure is growing again.